Booze, party, beach, neon lights, loud sounds, wild people, crazy party goers, dancing under the full moon, I was already imaging the things about full moon party. Joining this celebration was almost a year in the making. It started when a friend mentioned this one of a kind event to our group. He said that people from all over the world travel to have a wonderful time in Thailand and many choose not to miss this event; I said to myself, it must be worth it! I was ecstatic when I saw that all of my friends were thrilled to go. You know, I’ve been wanted to experience full moon party in Thailand and I was so glad everybody gave it a go. 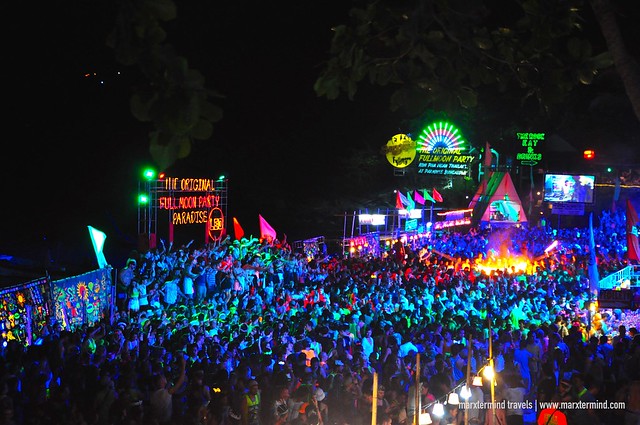 The original Full Moon Party in Thailand happens in Haad Rin Sunrise beach on Koh Phangan. The event originated for giving thanks to about a few groups of travelers at a Paradise Bungalows on the beach in 1985. Eventually it gained fame through a word of mouth and is now being attended of a crowd of about thousands, mostly tourists. The celebration takes place once in a month.

Koh Phangan is an island located in the southeast of Thailand. There are two airports closed to this island, in Koh Samui and in Surat Thani. We learned that it would be cheaper for us to fly to Surat Thani to get to Koh Phangan, so we chose it. From Kuala Lumpur, the flight took an hour and a half to Surat Thani. From the airport, we availed the transfer to get to Koh Phangan that included a bus and ferry ride. Fare was THB 590 (USD 17) per person. The bus ride took two hours and the ferry ride took three hours. It was a long journey I must say, with a little amount of time for break at the ferry terminal. Sad for us, we hadn’t had a good meal since morning. 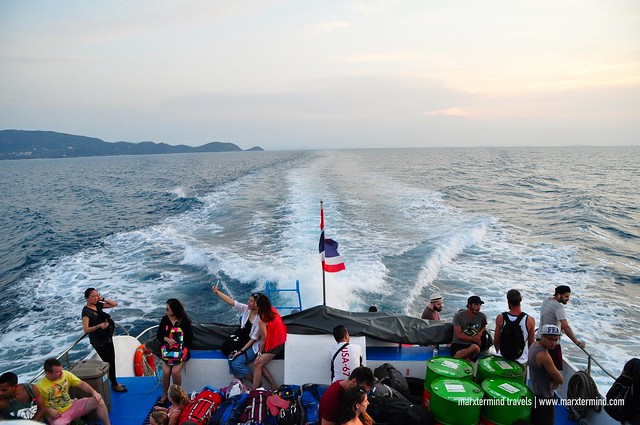 It was already nighttime when we arrived at Thong Sala Pier in Koh Phangan. Famished, we walked away from the pier and went towards the town to check some place to eat. There’s a hawker center. We settled in one of the stalls selling pre-cooked meals with rice. I was so hungry that I badly needed to eat rice.

There are several beaches that can be found in the island. But since we were there for the full moon party, we settled where the action is – at the Haad Rin Beach. After finishing our food, we looked for a vehicle that could take us to that beach. There were some songthaew lined up in the streets. They were offering THB 120 (USD 4) per person but we found it a little steep for us so we waited for others to pass by that could offer us cheaper. We chanced upon a lady driver. And after several bargaining, she offered the ride for THB 90 (USD 3). When we felt that we won’t be able to score any lower rate than that, we agreed. We soon drove the road that almost took an hour. 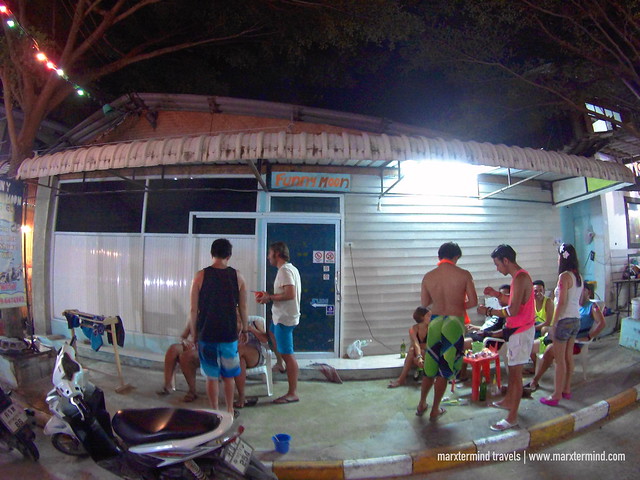 We stayed at Funny Moon Hostel, which is just a small walk away from the beach. Actually, we just booked this accommodation the day itself. When we learned that hostels are always fully booked during full moon, we rushed to make a booking before taking our flight. Luckily, there was availability for our group. We occupied the 8 beds in the 10-bed mixed dorm room. 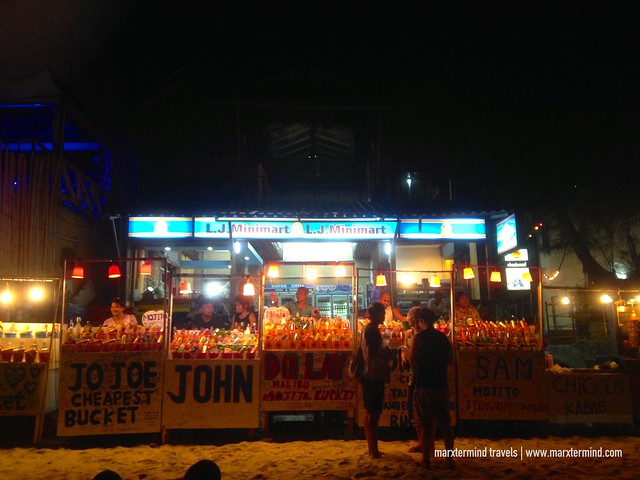 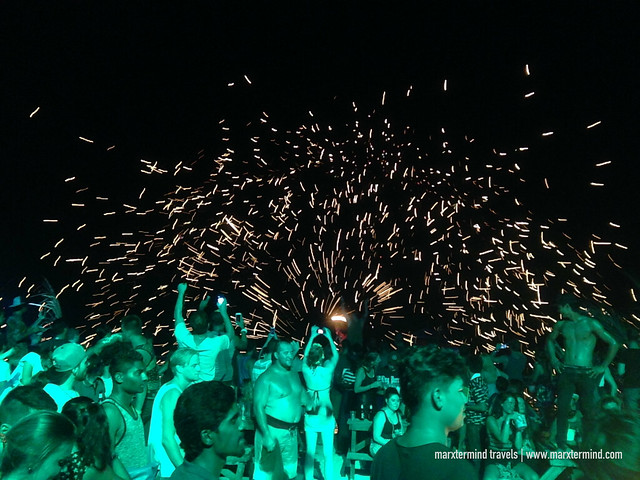 We headed to the beach after taking a few minutes rest to check out some happenings. There was a pre-Full Moon Party. There were some games and all. We bought beers then joined the crowd. 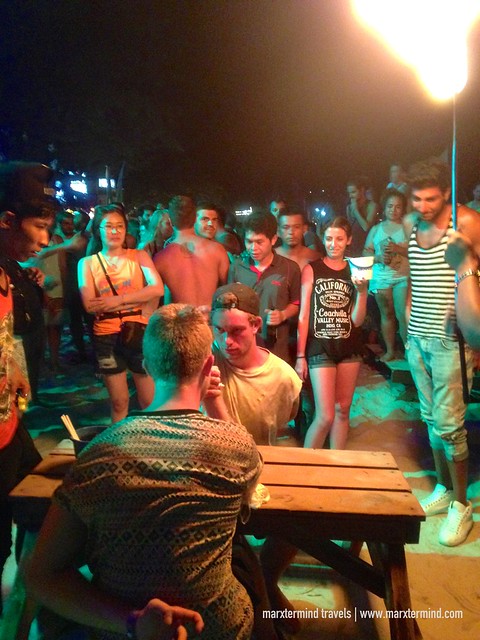 Haad Rin Beach was absolutely different during the day. The beach looks very nice with creamy white sand and clear water. It was teeming with locals and tourists but still a good place to sit or lay down the shore and have some time to relax as well. I also found the beach pleasant to swim. Though, the waves could be a little rough sometimes. I wonder how this place was before it became a party island. I bet it was a paradise. 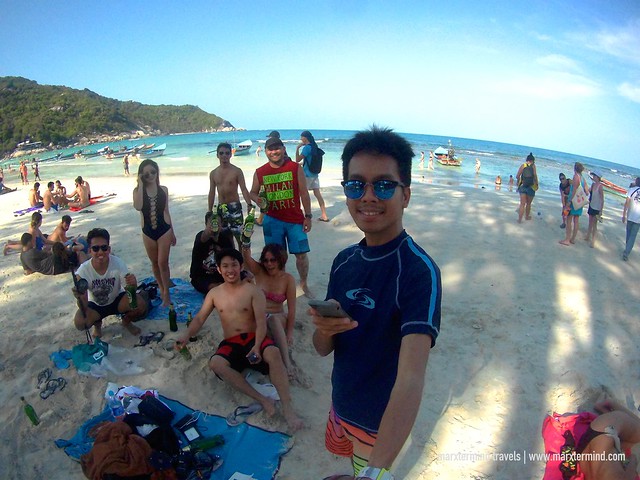 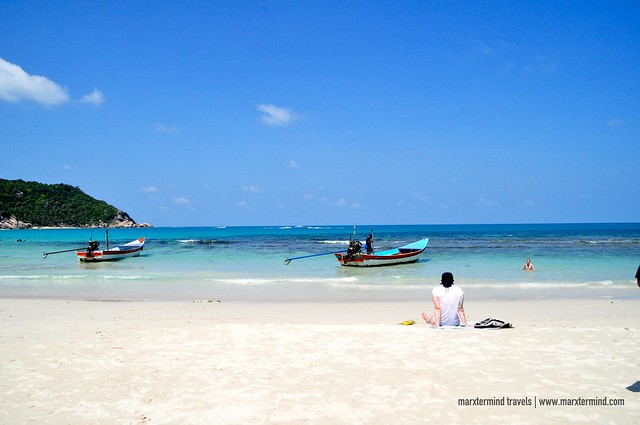 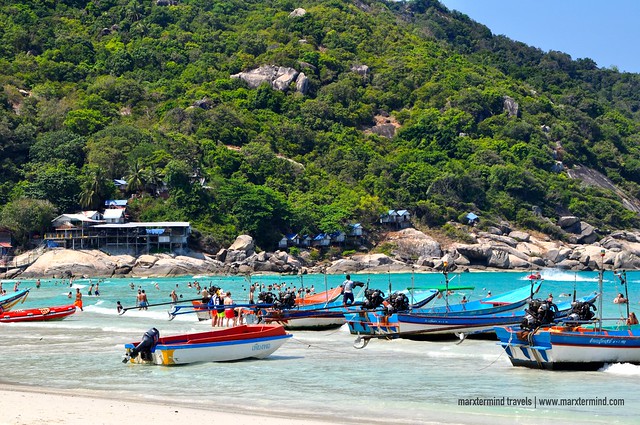 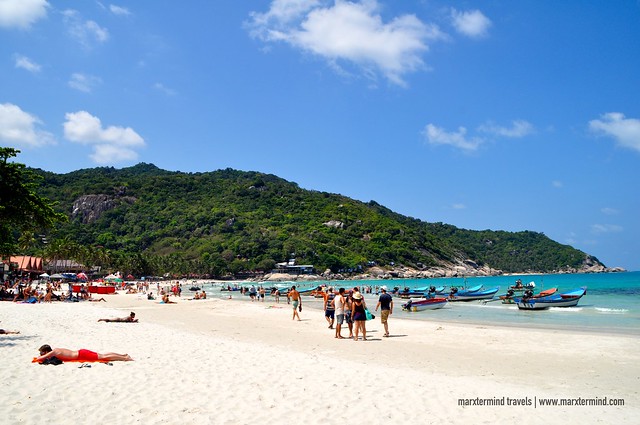 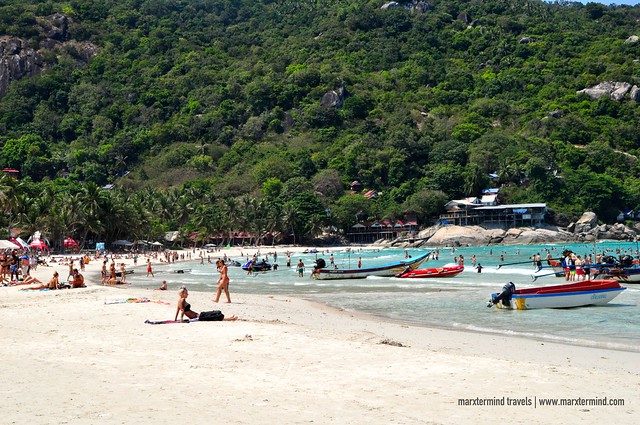 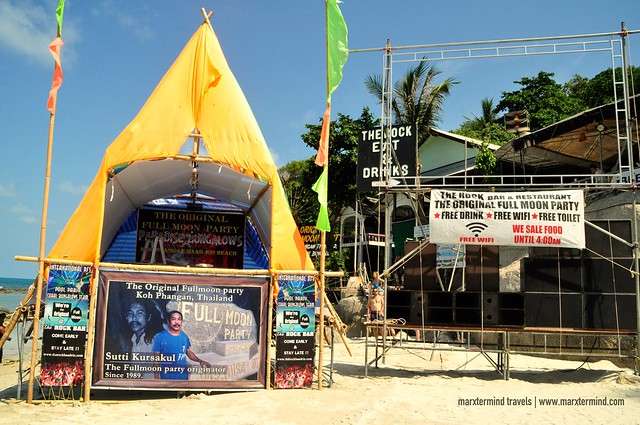 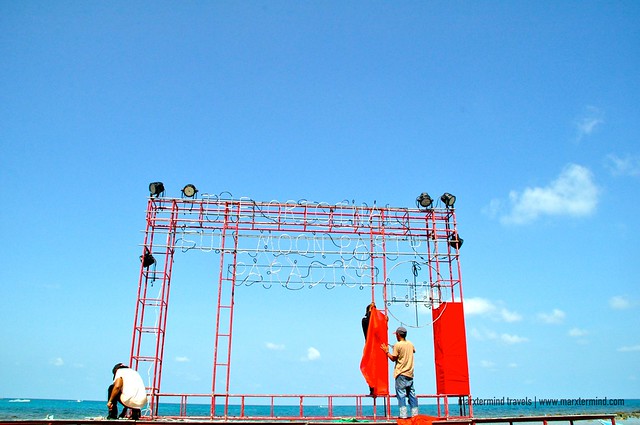 I took a stroll together with some of my friends. We found some bars already setting up for the party that night. And on the far end part of the beach, we saw a rocky portion. We climbed through the rocks and check out the view from there. 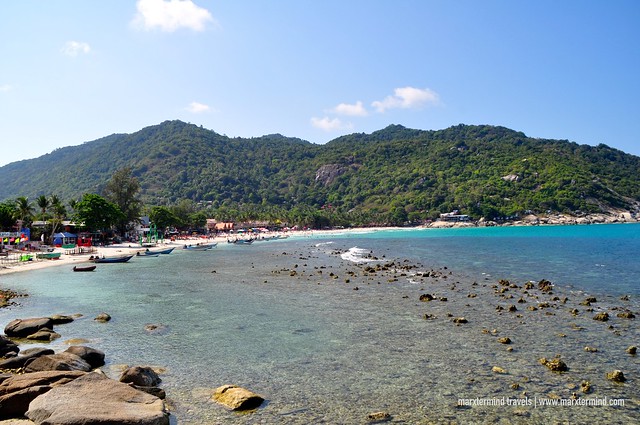 We made a plan. To stay up and last till morning, we had to rest and take a nap before going to the party. So after having our dinner, some began to slumber in their bed. But some of us went out to the street first to buy some neon shirt to wear during the party. Well, I found it hard for me to find a shirt that could fit for me because most stores didn’t have small sizes. Oh well… 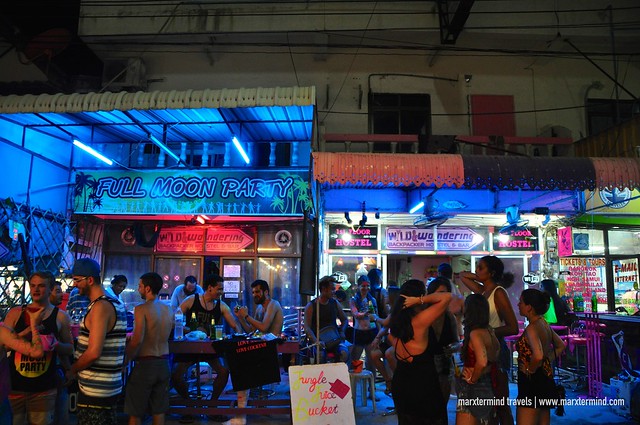 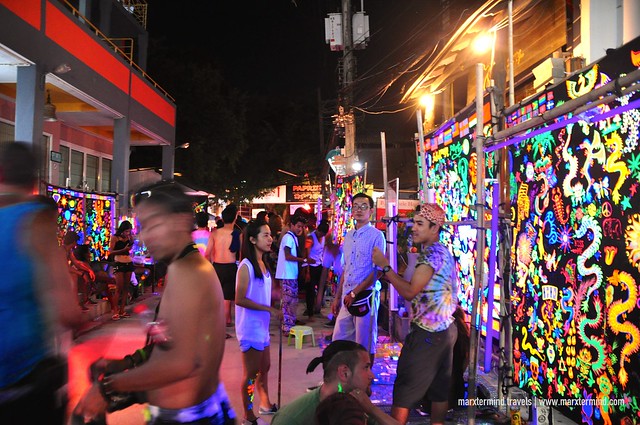 It was around 10:00 PM when everyone started to get up from bed. The owner of the hostel provided us free body paint that we could use. We got excited! Everyone put body and face paint. When everyone was ready, we went to the beach area and checked the party. The music was pumping and the people were wild. It was crowded but never expected to be that jam-packed. Or I was just got overwhelmed of the excitement to be part of that pack. When we captured enough of the party, we went back to our hostel to leave our cameras.

We went back to the party and found a small platform. From there we joined the celebration dancing with our beers in hand. It instantly became our own dancing stage. Eventually some other partygoers joined that little stage of ours. It was the best party ever! I expected this to be that crazy but I was still astounded. I felt elated. We were with the throngs of tourists, backpackers, vacationers bound with one reason, to experience the extreme Full Moon Party! 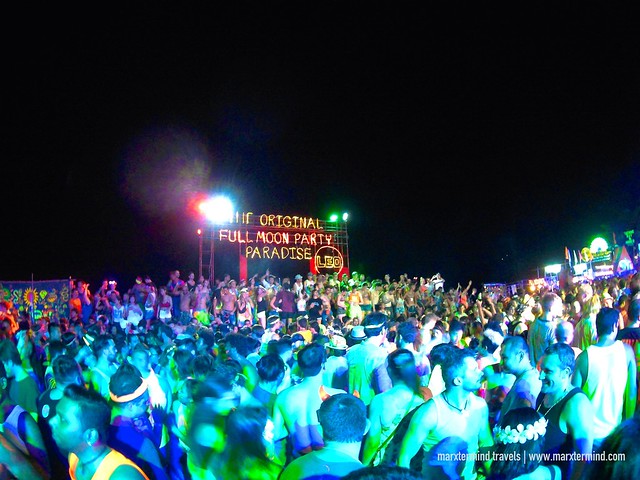 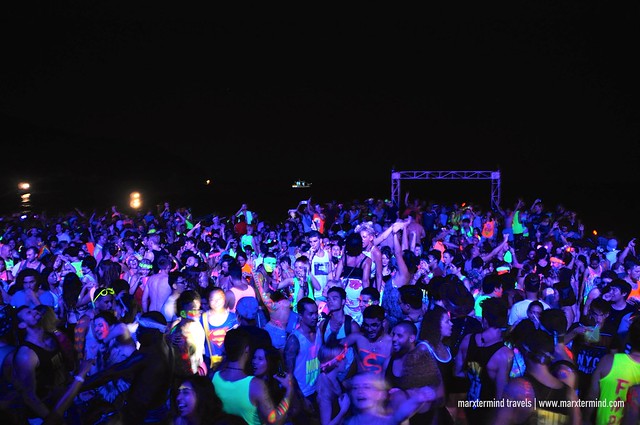 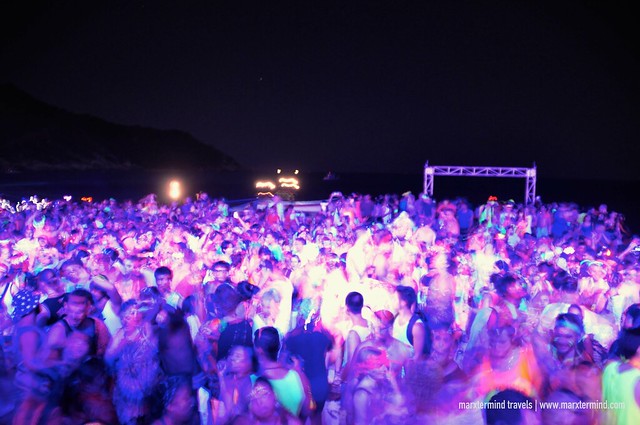 I sneaked out from the group sometimes to check out the stretch of the party area. Well, I just wanted to look around. Let’s just say, I’ve seen why this is the wildest and craziest party in Thailand.
Attending the full moon party in Thailand was one of the things on my bucket list. And I was happy to tick that off. The experience was incredible. Indeed, the best beach party that I’ve ever been to. I was just so happy that I experienced it with some of my favourite travel buddies (or party friends, now). It could be intense, as what they often say. And it was. 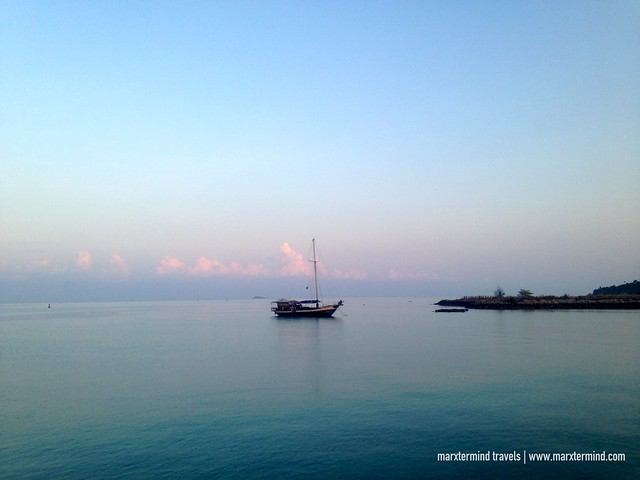 It was sunrise when we left Haad Rin Beach. The high was cut short because we had to leave early for Krabi. We felt sad leaving Koh Phangan so quick. But I know this wouldn’t be the last time. My pleasant memories of full moon party are telling me to go again and experience it. And I will. Hopefully, soon!
9.7318753100.0135929
0
SHARES
ShareTweet