Do you still remember the last time you received a snail mail? How about the last time you saw a postage stamp? Have you heard of the Metropolitan Theater in Manila? In this new generation, I doubt if the kids were familiar of these things. Because of digital and automation, mails and stamps were somehow been set aside and has been replaced by these so called electronic mail, instant messaging and social networking sites to name a few. Also with the inevitable rise of malls, malls and malls in Metro Manila, we tend to forget to rediscover the history and visit the important landmarks in the cities of Metro Manila. 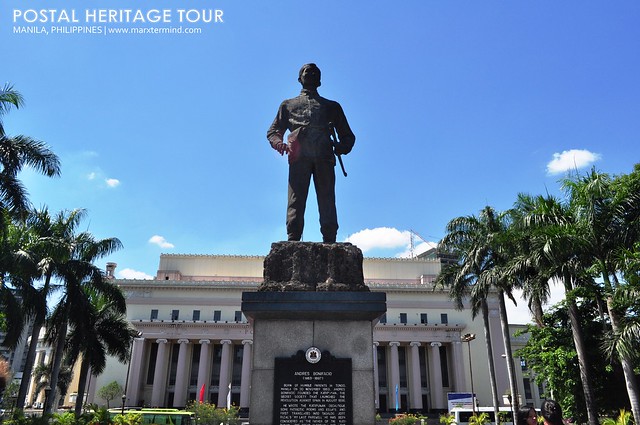 Few months ago, after a weekend getaway in Batangas with my friends we went straight to Manila and joined the Postal Heritage Free Guided Tour. Assembly time was at 1:00 AM at Liwasang Bonifacio fountain area. 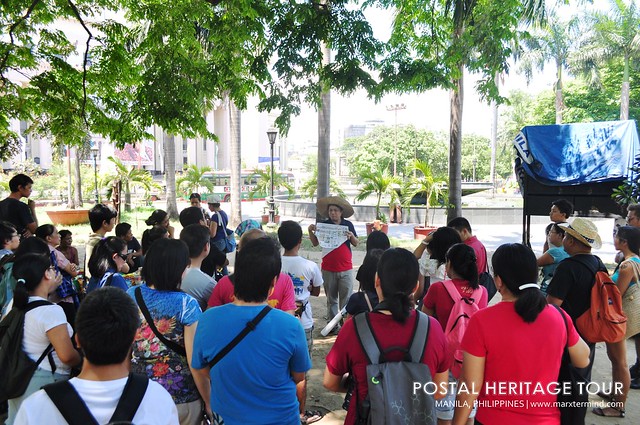 The tour started with some introductions then followed by a getting-to-know-each-other sort of things. Our guide was Lawrence Chan from Filipino Stamp Collectors Club.

The Manila Post Office is the central post office of the city. It is the head office of the Philippine Postal Corporation, and houses the country’s main mail sorting-distribution operations. 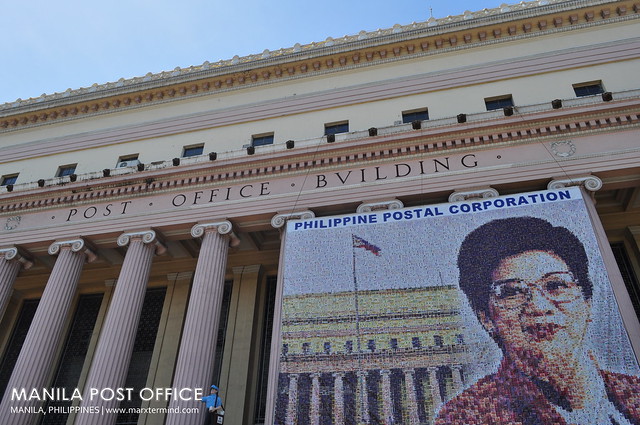 Did you know that this building will soon become a luxury hotel? A Singaporean hotel operation, Fullerton Hotel, is said to be in talks with the Philippine government for the possible conversion of this 86-year-old neoclassical post office building into a 5-star hotel. 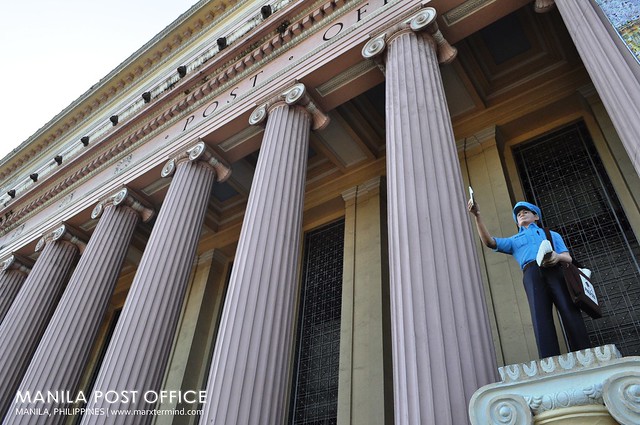 It is said that the reason behind this was the government wants to boost the tourism in the area. The possible development will help the neighboring landmarks like Intramuros, Manila Metropolitan Theater and Liwasang Bonifacio. Whatever the reason it may be, I hope Fullerton Hotel maintain the looks and structure of the building and its historical ambiance.

We entered inside the post office building. There’s an on-going postage stamps auction. I think it was my first time in my life to see such auction. 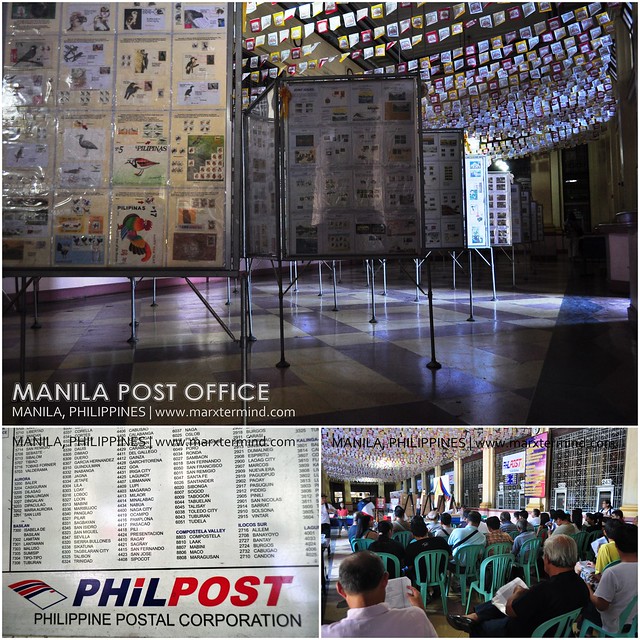 We were toured around the exhibit and the guide discussed about the various postage stamps on display. Oh my goodness, its history! I have to admit, me and some of my companions didn’t join the discussion about the postage stamps exhibit and had decided to go out and look for a place to chill.

After an hour or so, the tour inside the post office has ended. We now again joined the guided tour continuing at Metropolitan Theater.

Before the rise of malls in Metro Manila, there’s the Metropolitan Theater located on Padre Burgos Avenue, near the Manila Central Post Office. Also known as MET, it is an art deco building designed by the Filipino architect Juan M. Arellano with a capacity of 1,670 (846 orchestra, 116 in loge, and 708 in balcony). But the theatre was severely damaged during the liberation of Manila by the United States and Filipino forces in 1945. The theatre lose some of its roofing and walls battered. Then, it gradually fell into disuse in the 1960s. In the following decade it was meticulously restored in 1978 but again fell into decay. 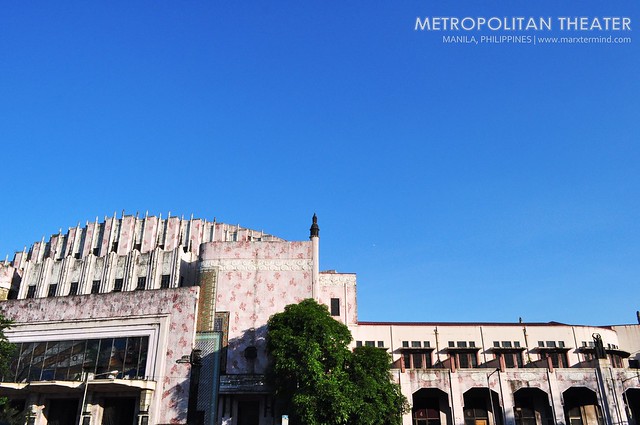 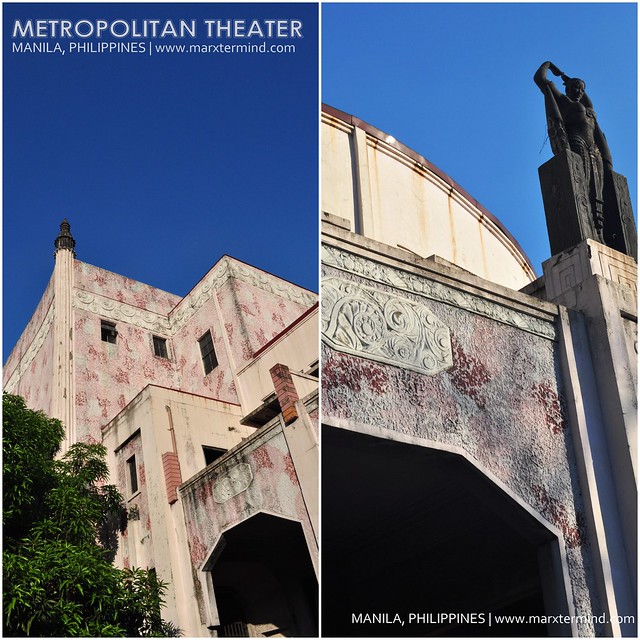 I always see this building whenever I pass through the bridge going to Quiapo but never been gotten inside of it. It is said that this building is haunted because of being abandoned for many years now. I didn’t know why they stopped using this building but from what I’ve read it is because of its condition which has been deteriorated due to several factors. In 1996, the theater fell into decay and closed down due to a long-running dispute between the Government Service Insurance System and the City of Manila over its ownership and management. 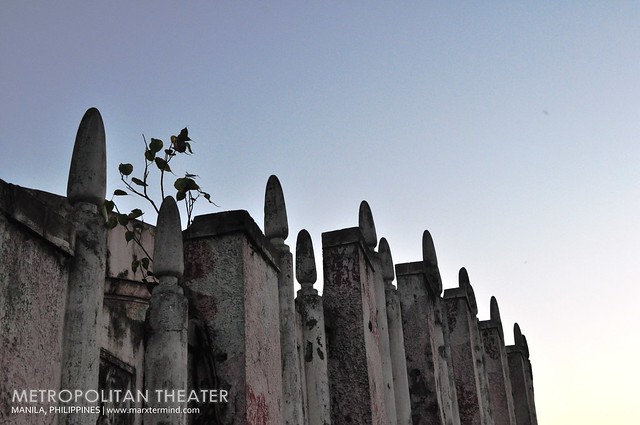 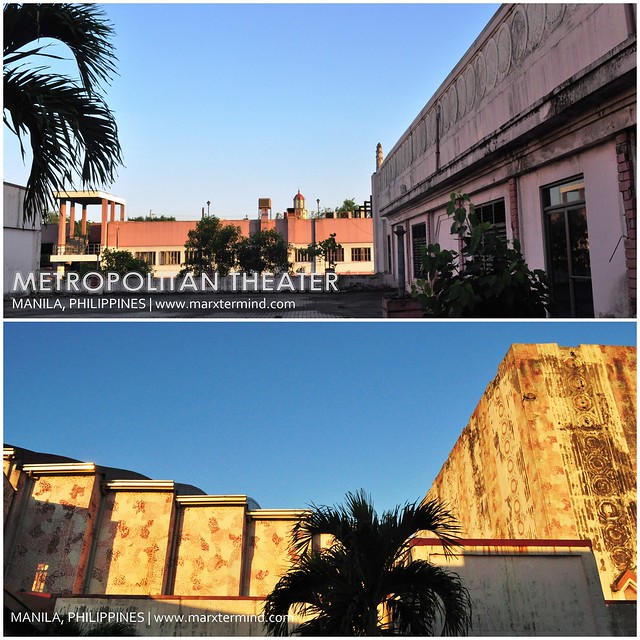 As we walked inside we saw that the walls were vanishing its color and the ceiling were falling apart. 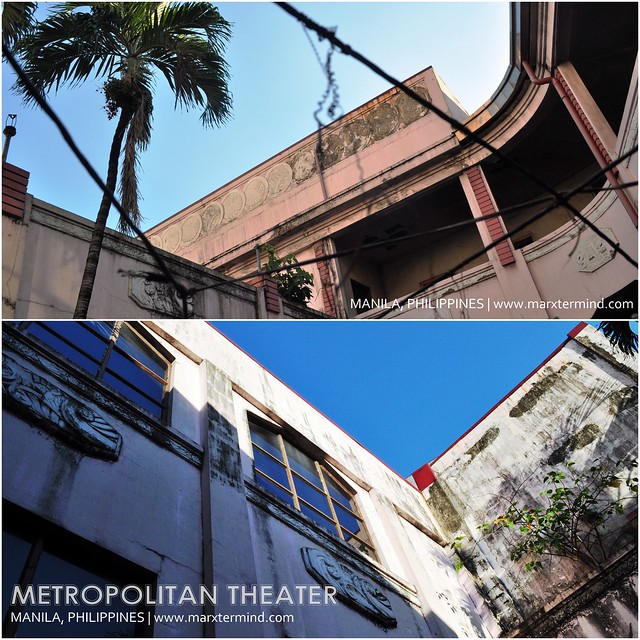 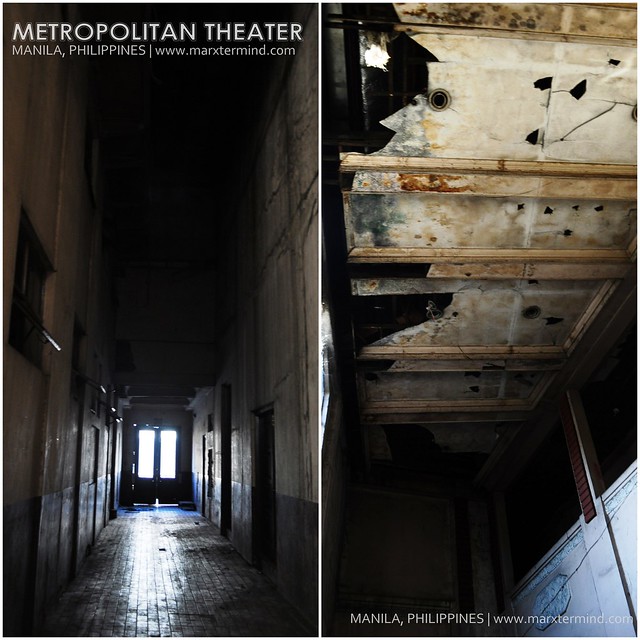 The hallways are now dimmed with lights only coming from the outside. The rooms are dark with some things left out on it. There are old paraphernalia which shows some events and celebrations held here. 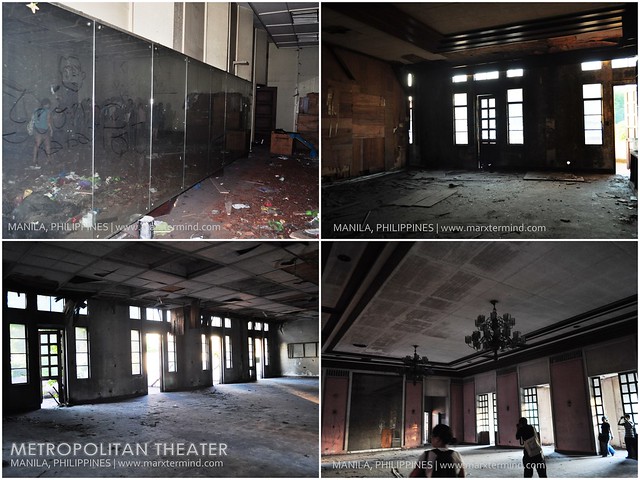 The theater played host to vaudevilles, zarzuelas, performances and other theater entertainment by world re known artists. 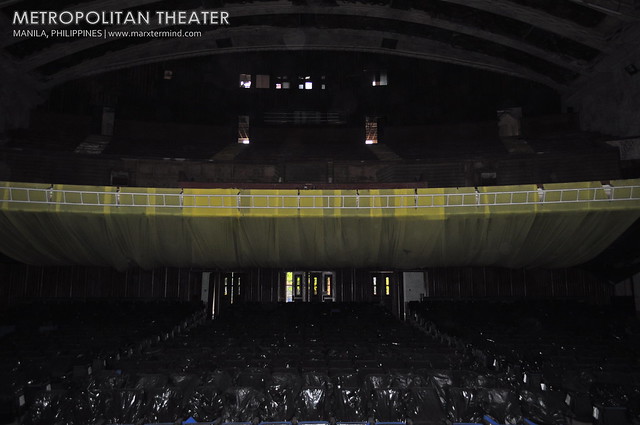 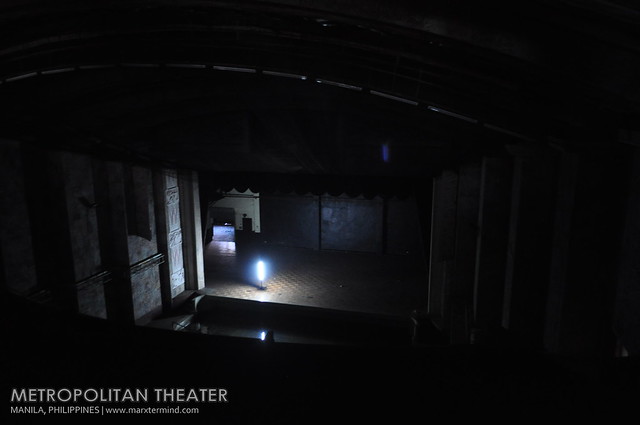 It is also said that the popular variety television show hosted by Ms. Vilma Santos was also held here during the 80s and 90s. 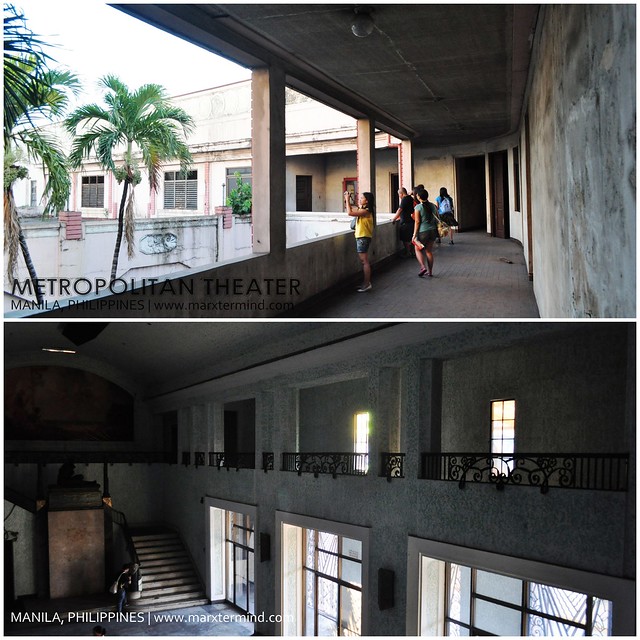 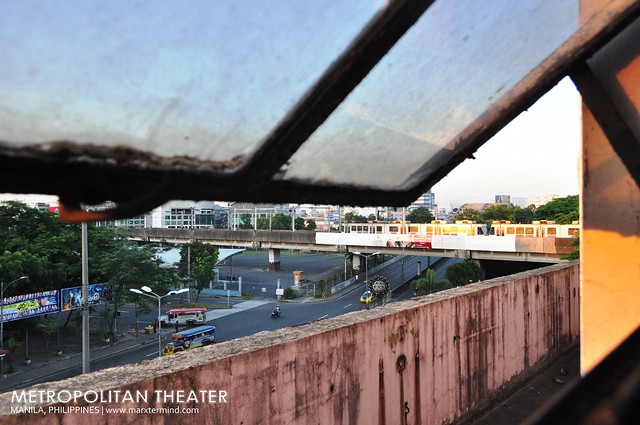 We roamed the entire theater until we reached the top of it. A veranda wherein you can have a glimpse of the sunset in Manila. Every sculptures and design of this building signifies a story and interpretation. Being built years from now, the history of the Manila Metropolitan Theater made its way to be referred as the grand dame of Manila’s Theater. I was glad to learn that there are talks that Metropolitan Theater will be restored soon. 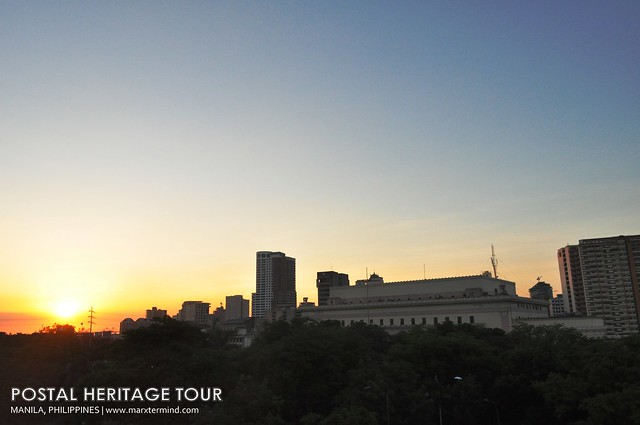 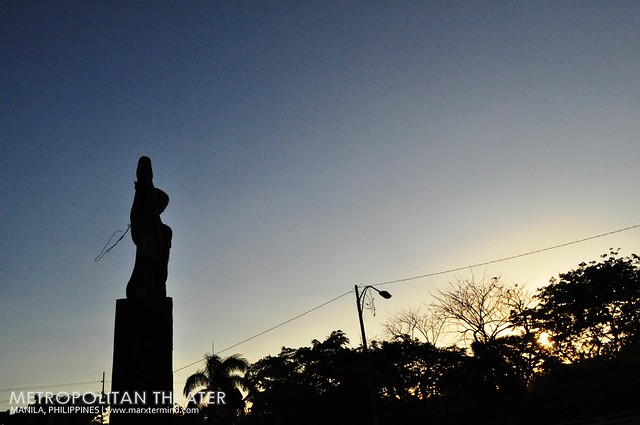 The tour ended after sunset. Some of the joiners still made their way to the Arroceros Forest Park as the last stop of the guided tour while me and my companions stopped from here and went to Binondo for dinner. 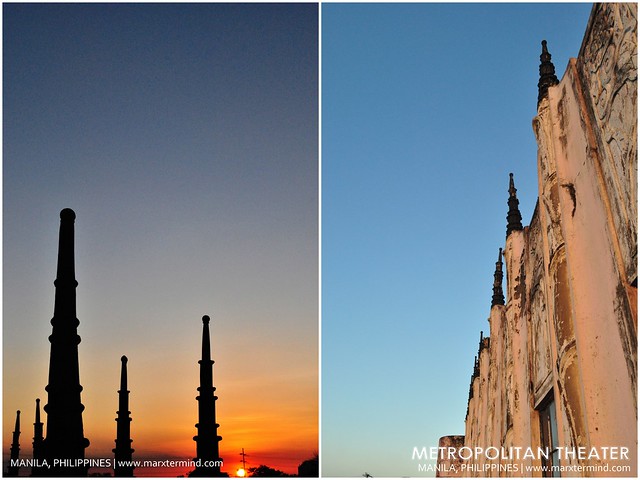 If you would also like to join this tour, you may contact Filipinas Stamp Collector’s Club or the following persons listed below. The free tour is schedule every third Sunday of the month.

Ms. Nena De Guzman
Phone: 527-0096
Postal Museum and Library
Monday to Friday 8am to 5pm only for parking instruction.