A Day at Universal Studios Singapore

It was an exciting day for us as we headed to the Universal Studios Singapore. To get there, we rode a shuttle bus outside Vivo City. The fare costs SGD 2.00 for round trip. We already purchased our tickets online prior to this trip. The One Day Pass admission fee costs SGD 66.00, and good thing there was a promo of 20% off discount for those who will purchase using MasterCard.

It was already 11:00 AM when we got to the Universal Studios Singapore. We felt excited as soon as we saw the theme park’s famous trademark, the revolving globe. Of course, we took pictures first! 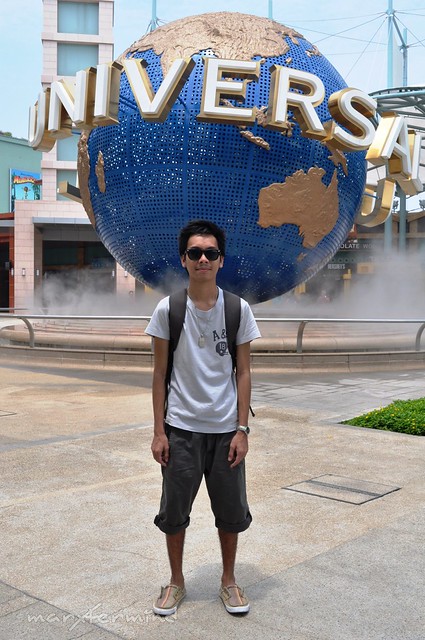 The park is divided into 7 sub parks. The Hollywood, Madagascar, Far Far Away, The Lost World, Ancient Egypt, Sci-Fi City and New York. 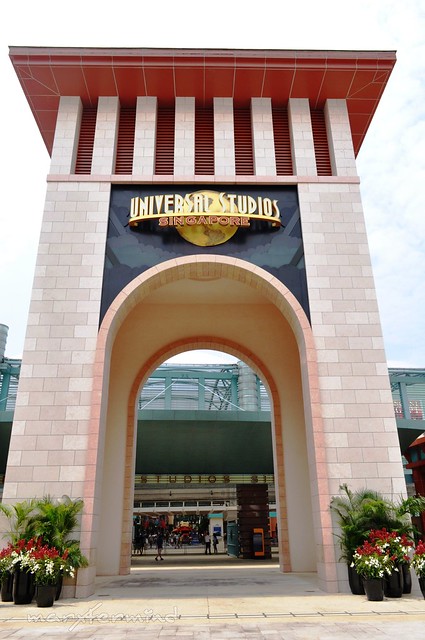 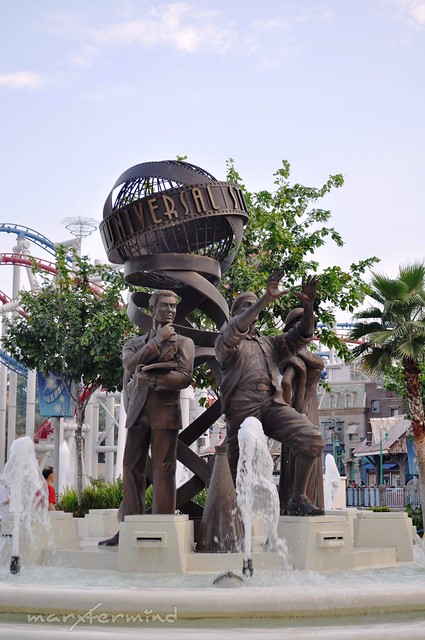 I’ve been longing to get here and the feeling was ecstatic. As soon as we entered the theme park, we can’t help but feel excited. The Hollywood  welcomed us with character and greatness. Well Frankenstein is also here! Ready for photo ops! 🙂 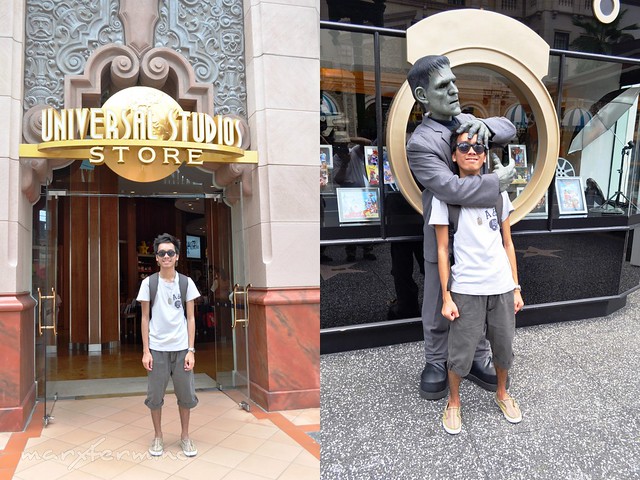 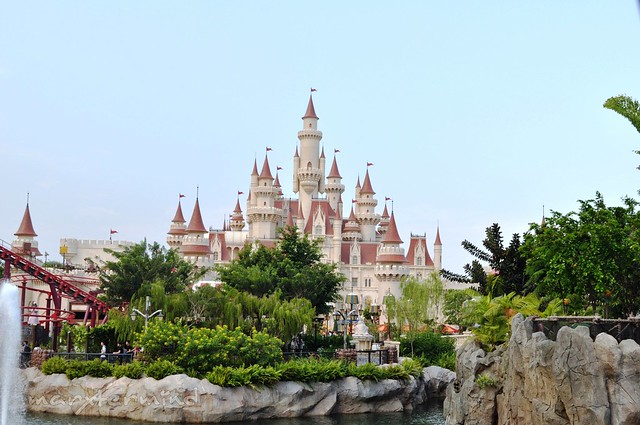 The first attraction we rode to is the Enchanted Airways, a junior roller coaster for a flight over Far Far Away. After the ride, we walked towards the Far Far Away Castle. 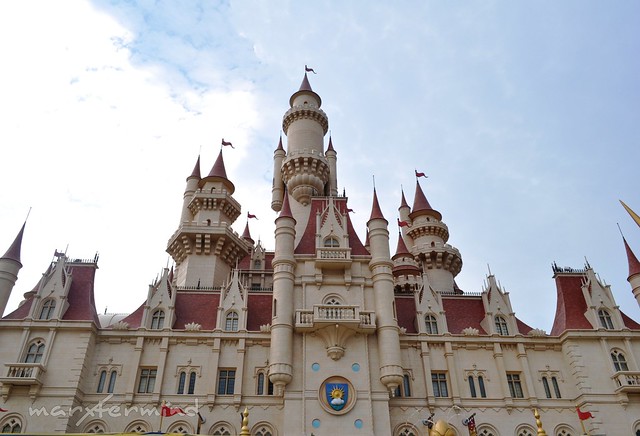 Because we failed to watch the 4-D at Genting Highlands, we ensure that we will be able to watch 4-D at Universal Studios Singapore. We’re just in time when we entered the attraction as it will start in 10 minutes. What’s great about the attractions here was they have this timer provided at attraction’s entrance so visitors can check how long they still need to wait or stay in the queue for their turn. 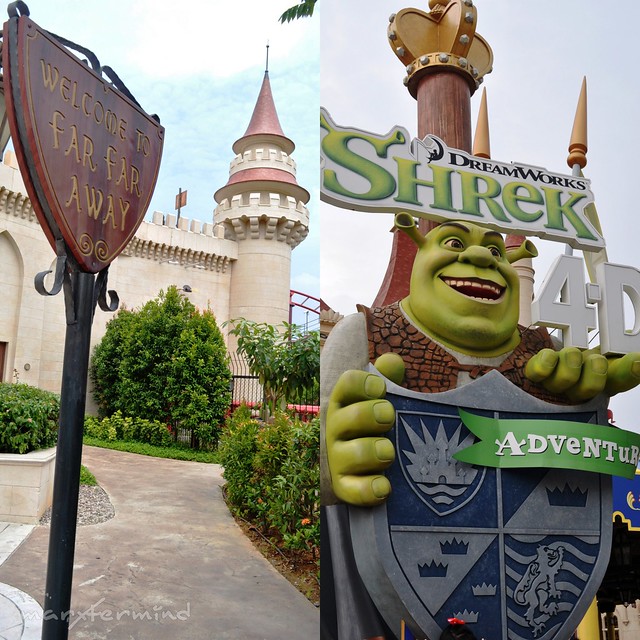 Taking pictures were not allowed inside. The Shrek 4-D Adventure let us saw, heard and felt the action from our seat as we joined the characters in a fairy tale adventure. Afterwards we moved to the next attraction, Donkey Live. I’ve read that it was worth the time to watch this show so we gave it a try. 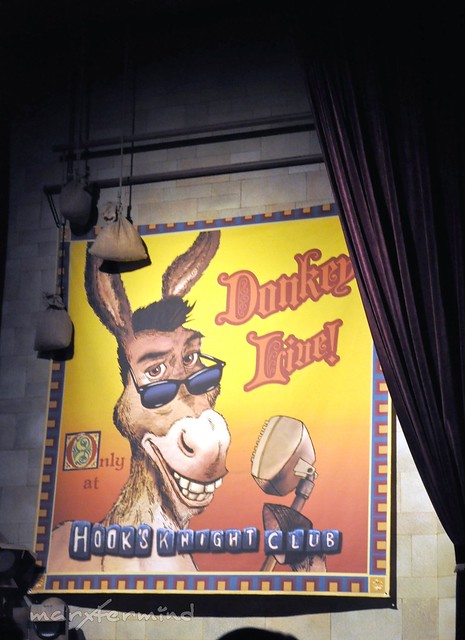 We enjoyed the show. I was amazed how interactive it was. Donkey was really conversing to the audience live! It was already past 1:00 PM so we’ve decided to take our lunch first. We didn’t want to go far anymore so we just had our lunch at the nearby fast food, Goldilocks. I ordered 2-pc chicken meal with bread, mashed potato with regular drink. I asked if they have rice since I was really hungry that time but unfortunately they don’t have. Anyways, the food made me full after all. 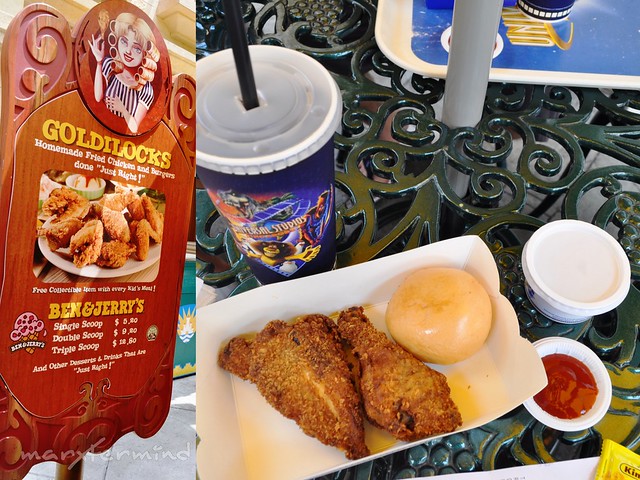 After we had our lunch at Goldilocks, we went to The Lost World. 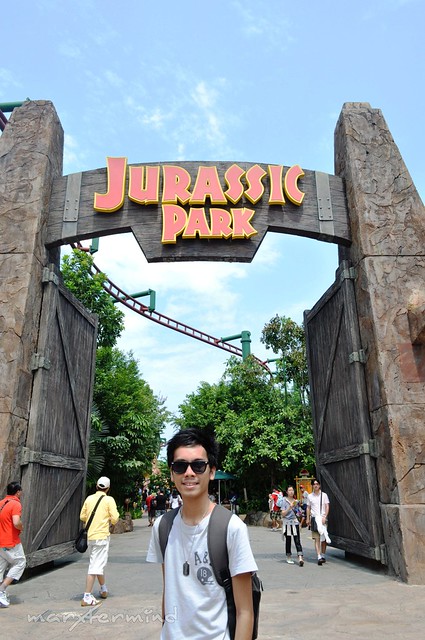 I love the movie Jurassic Park. I was expecting a lot from this “The Lost World” but it didn’t meet my expectation. We rode the Canopy Flyer, and I must say it’s for kiddos! It’s nothing thrilling but it gave us bird’s eye view of the park. And oh, there’s an insect trapped inside the wall! 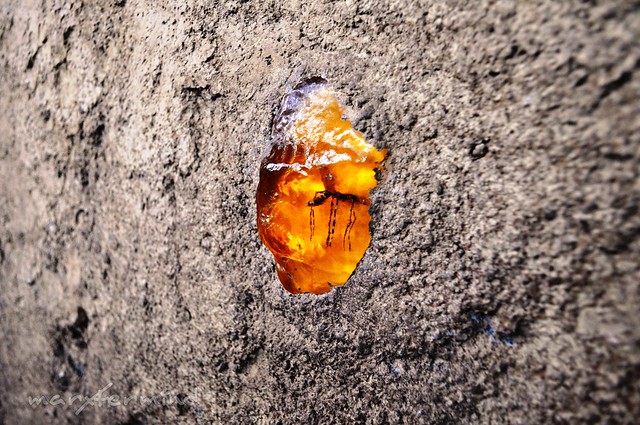 There’s also Water World attraction at The Lost World, which you will witness death-defying stunts, awesome explosions and thrills at sensational “live” water show. Unfortunately, we were not able to try this one.

Moving on, we went to the Ancient Egypt area, inspired by the movie The Mummy. 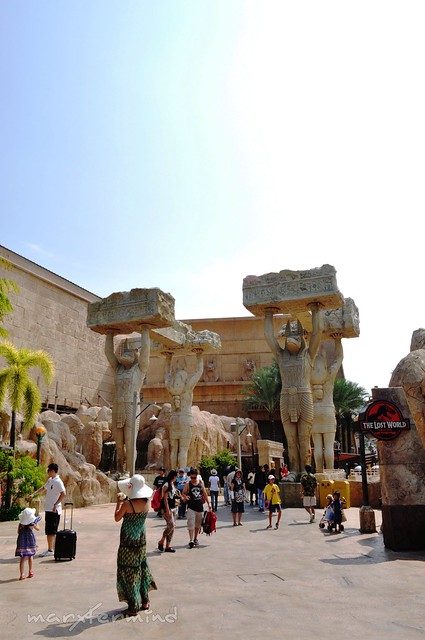 I got amazed on the structures of the Ancient Egypt. The heat from the sun also adds up the Egyptian theme of the park, feels like we’re in Egypt! The Revenge of the Mummy caught my attention as it looks like exciting and thrilling so without any hesitation we rode on this one. Loose objects are not permitted. Free lockers are available during a visit to this ride. 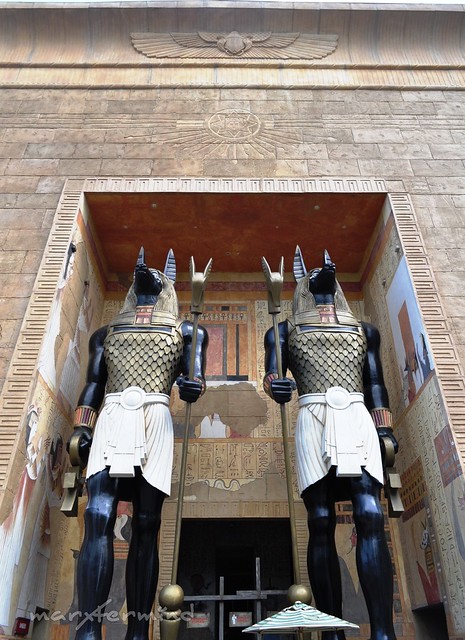 The ride is an extreme indoor roller coaster plunged into a total darkness. I like this ride as we came face to face with warrior mummies and scarab beetles. The ride also made my voice, grating in sound as I was really screaming during the entire ride.

Afterwards, my companions wanted to try the Treasure Hunters. Its a children ride which you’ll drive the desert jeep through an abandoned Egyptian excavation site. The queue and waiting time for this ride were so long so I  asked my friends that I’ll just go to the Sci Fi City and ride the Battlestar Galactica. They continue on their ride while I walked excitedly towards the extreme roller coaster. 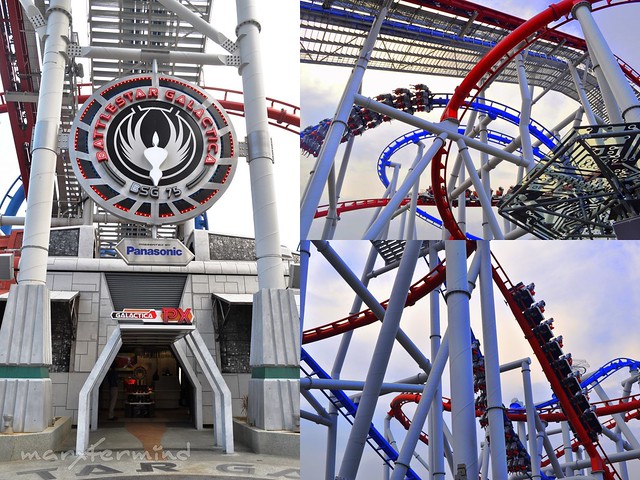 Loose articles are also not permitted here, so one must leave his / her belongings at the free locker.

The Battlestar Galactica is a high-speed turbulent roller coaster. It has Cyclon (blue track) and Human (red track). I rode at the Human first then proceeded at the Cyclon! The both rides are thrilling and enjoyable as well but my neck ache afterwards. Maybe because of the sudden and dramatic acceleration of the ride. But after all, this was deeply moving! I wanted to try it one more time but we only have few hours left to explore the rest of the park. 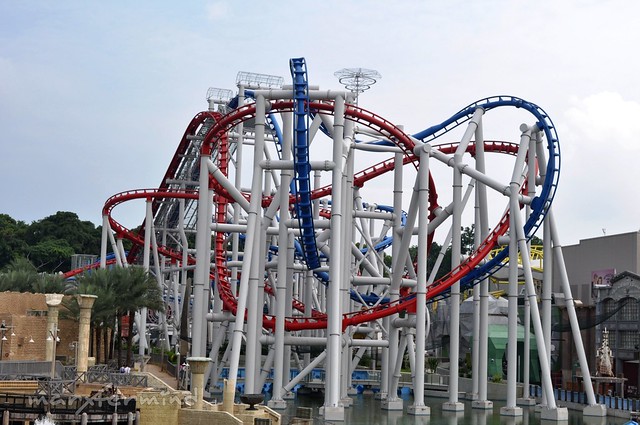 After the ride, I went back to the Ancient Egypt area to meet my friends. It was just in time as they were already done with their ride. We saw some famous characters, the Egyptian Royalty and the Army of Anubis so we asked for some photo ops. 🙂 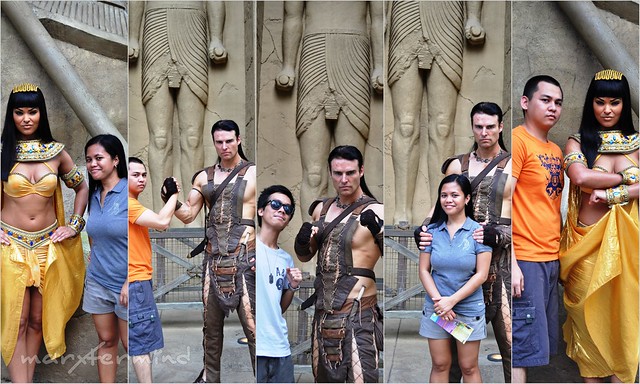 Then we moved to the Sci-Fi City. 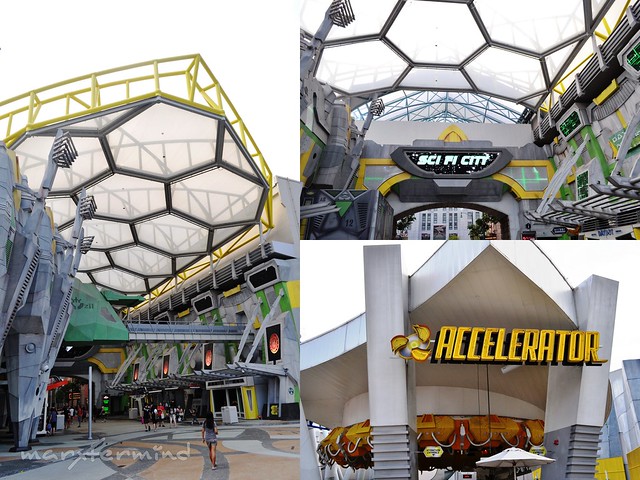 Nothing much to see here aside from the Battlestar Galactica so we proceeded at the New York Area. People were clustered in front of the World Premiere (theater). A dance group was performing and I assumed its the Streetboys. I heard and read from somewhere that some of the member of Streetboys are already working at the Universal Studios Singapore. 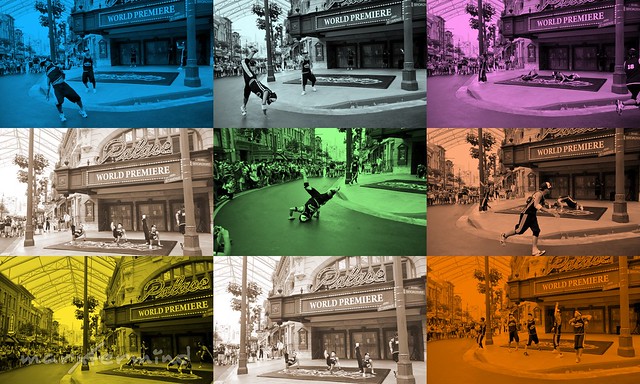 And it’s right, they are the Streetboys. It was an impressive and fun dance show performed by the group. 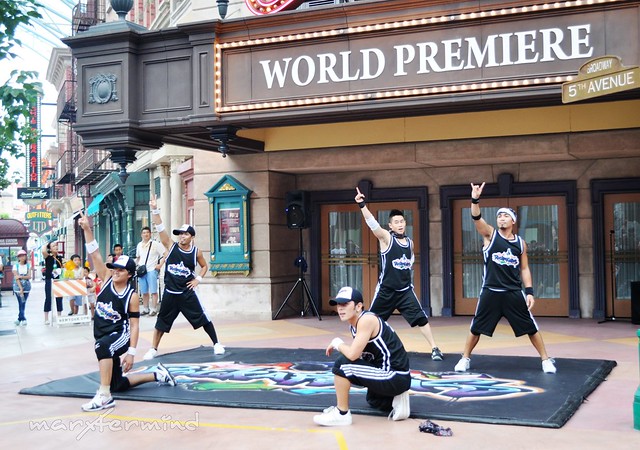 Moving on, we explored more of the New York area. We watched the Lights, Camera, Action! (Hosted by Steven Spielberg), an empty sound stage becomes the setting for a major hurricane about to hit New York City. 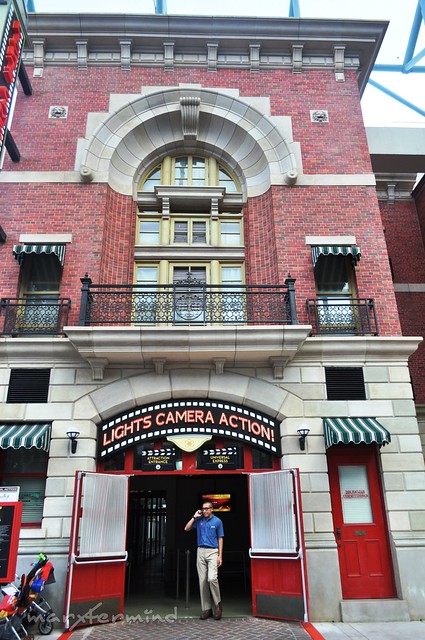 It was like we were watching the set for a movie. 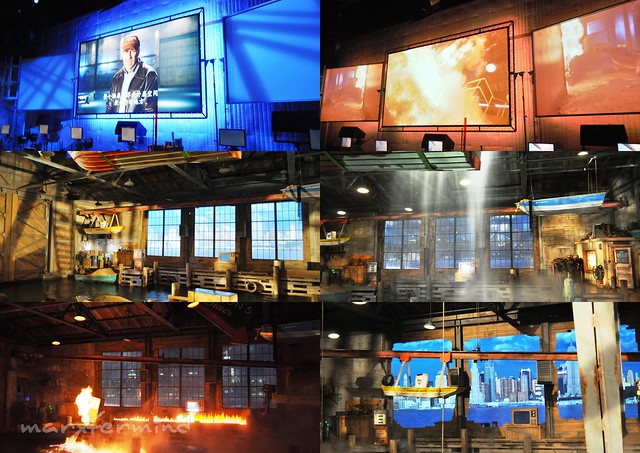 We also found some famous personalities and characters at the New York area. We spotted Charlie Chaplin, Betty Boop and Beetlejuice. 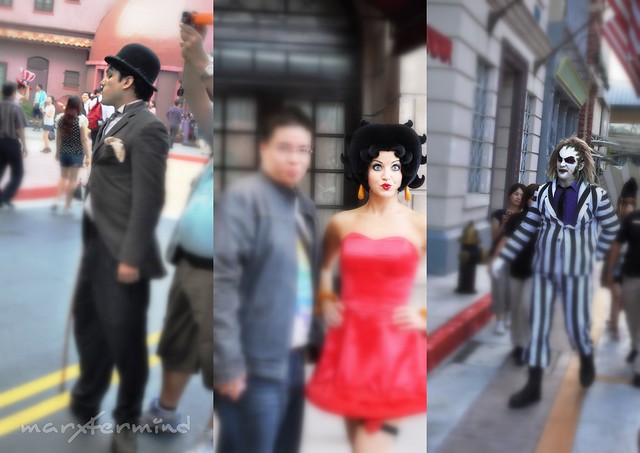 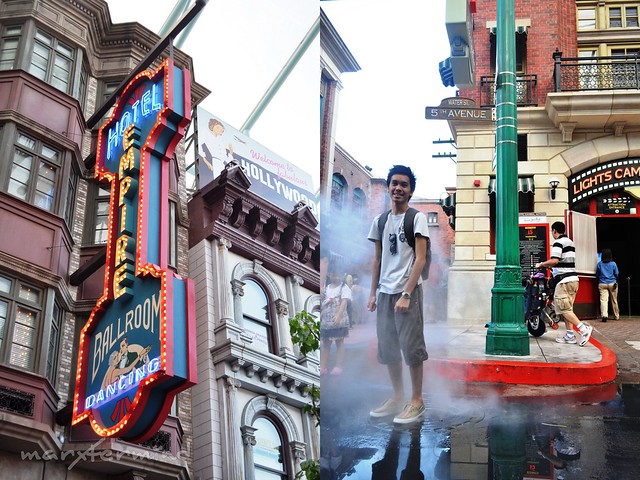 From New York we walked towards the Madagascar area. Since we still have few minutes left, we rode at the Madagascar: A Crate Adventure. 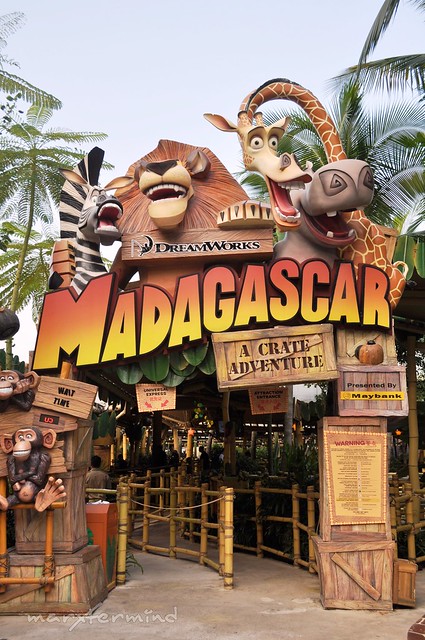 We thought this one will be a wild one but it isn’t. It’s a river boat ride along with the characters of Madagascar. It’s quite boring and expect to be wet on this ride. We walked towards the exit as it was already time for us to go and moved to our next destination.

As we walked through the street of Hollywood, we saw Marilyn Monroe. 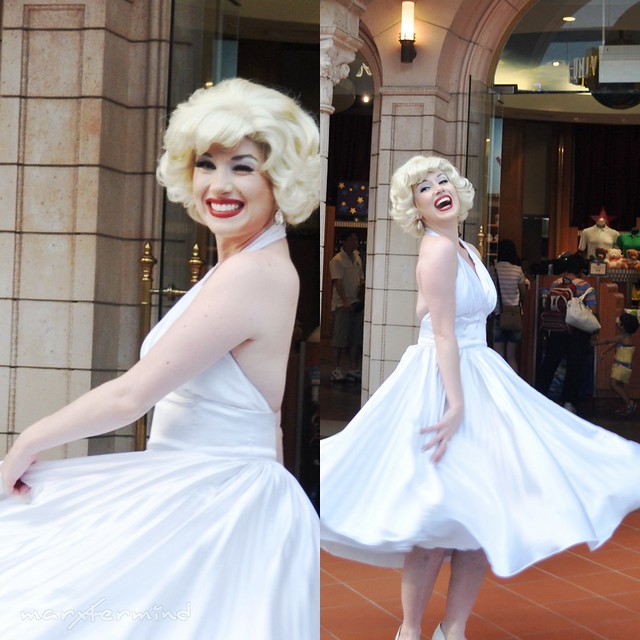 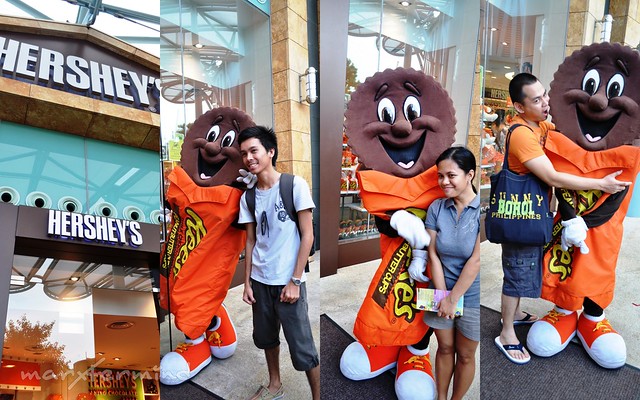 It was a fun and amazing day at the Universal Studios Singapore. I so love theme parks as it bring out the kid on me, or on all of us perhaps!