Lioness Back and Rhino Rock Formations in Bulacan

A site in Bulacan is fast becoming a hotspot to adventure seekers, the Lioness Back and Rhino Rock Formations. Why wouldn’t it be popular when this site offers a nice view and rock formations that are really interesting and exciting. Should I still mention why these rock formations are named such? Well, they resemble a lioness back and a rhino. 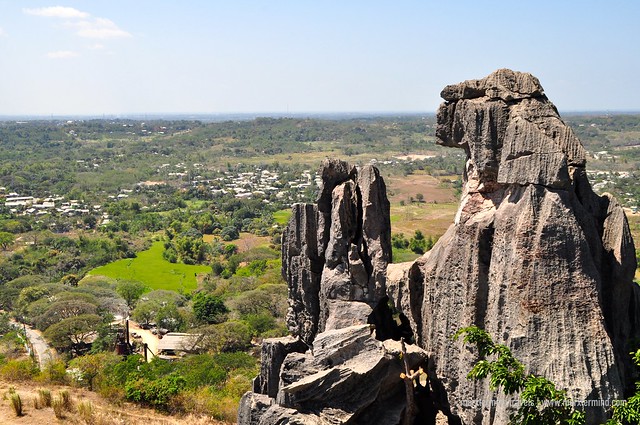 Another reason why people visit this place is because it is very accessible from Metro Manila and can be done in a day. One doesn’t also need to spend so much to get here as visiting this site doesn’t even cost a thousand pesos.

That sounds a nice option for an instant day trip, right?

So it was one Sunday when Elal, Marcos and I met up at the Shangri-la Mall then went to Bulacan to visit the popular rock formations in Norzagaray. I was in a hiatus from hardcore adventure or rock climbing for the past 20 months so when I received this invite, I didn’t hesitate to join. 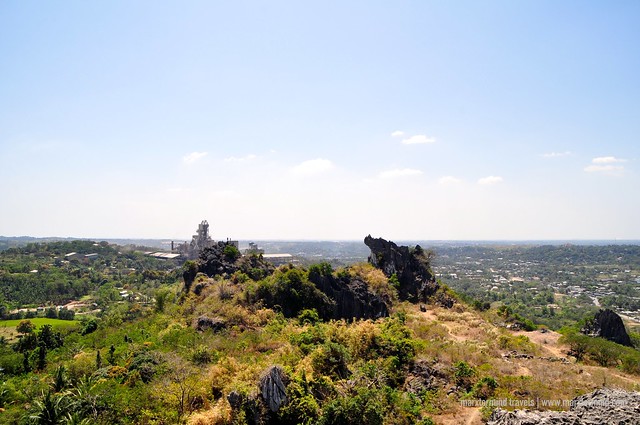 Originally, we planned to visit the rock formations early morning but since it was dreadful for us to get up at dawn, we had just decided to move our meet up time to 9:00 AM.

How to go to Norzagaray, Bulacan?

Going to Lioness Back and Rhino Rock Formations is easy by commute. From EDSA, take a bus bound to SM Fairview. Bus fare from Shaw Boulevard costs Php47 per person with travel time of an hour. Once you reached SM Fairview, transfer to a jeepney that is bound to Bigte, Norzagaray. Tell the driver to drop you off at the circle (bilog, paikot), which is just few meters away from the public market. Jeepney fare costs Php30 per person with travel time of about an hour. Once you arrived at Bigte, hire a tricycle to take you to the site’s jump off point. Tricycle fare costs around PHP 10 per person with a travel time of 5 minutes.

Rock Scrambling at the Rock Formations of Lioness Back and Rhino

Because this is a strenuous activity that needs a guide, we hired one – whom we’ve got the contact from Kevin’s blog.  Kenneth, our guide, met us up in the town proper. After finishing our lunch in one of the eateries, we then rode a tricycle going to the jump off point. You wouldn’t notice that it would already be the path that leads to the rock formations because the area is a residential one. In fact, the way that visitors get through to reach the rock formations is a private property. 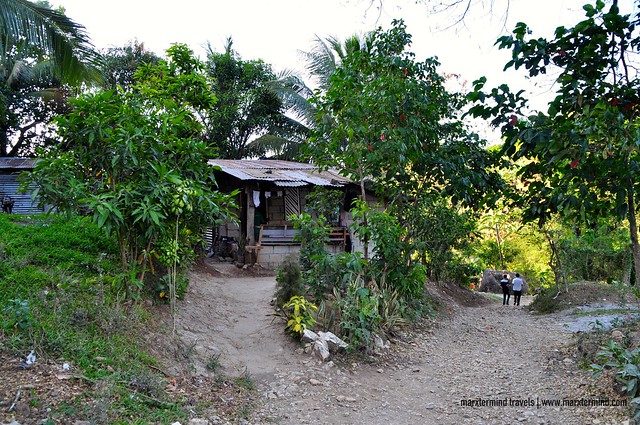 There were some people telling that there’s an entrance fee but our guide didn’t mention anything about it. Well, I guess it’s not compulsory.

Reaching the rock formation wasn’t easy. It won’t take a long time to reach it but scrambling through the rock face and sharp edges makes it a tough one. We went to the Lioness Back rock formation first. At first we thought there was going to be like a few minutes of easy hiking and all, just to prepare us for the difficult part of rock scrambling but no, there’s none. As soon as we passed through a house then that was it, we had begun scrambling through the rock terrain. 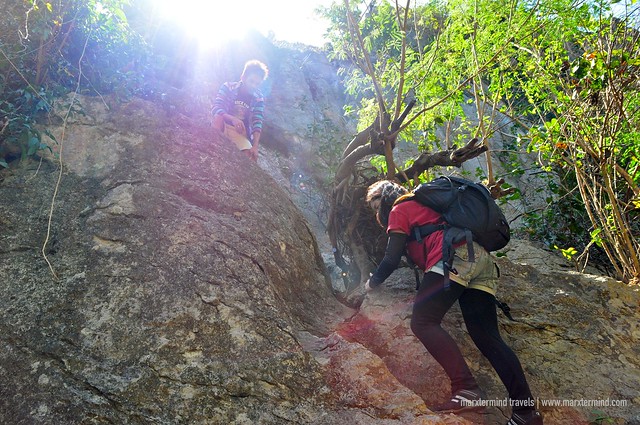 Scrambling through the rock edges was not easy at all. But our guide told us that famous newscaster, Jessica Soho had able to reach the upper part of the rock formation sometime ago when she made a feature of this site. That thought motivated us to continue with our tough pursuit. 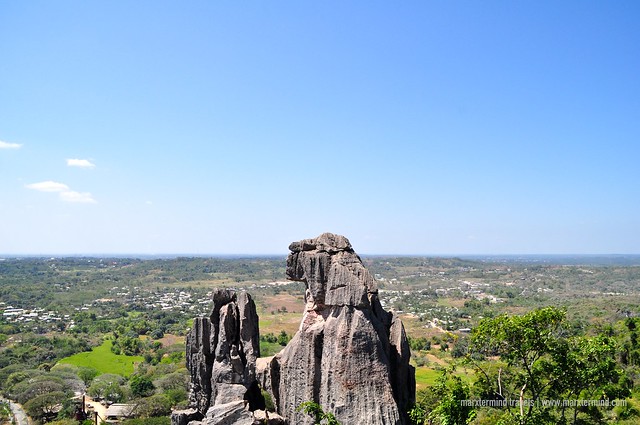 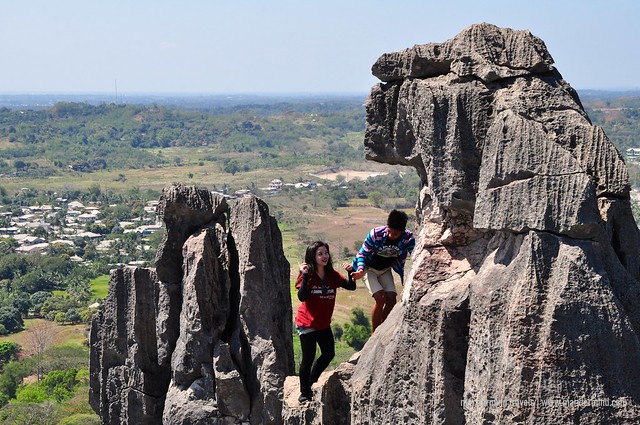 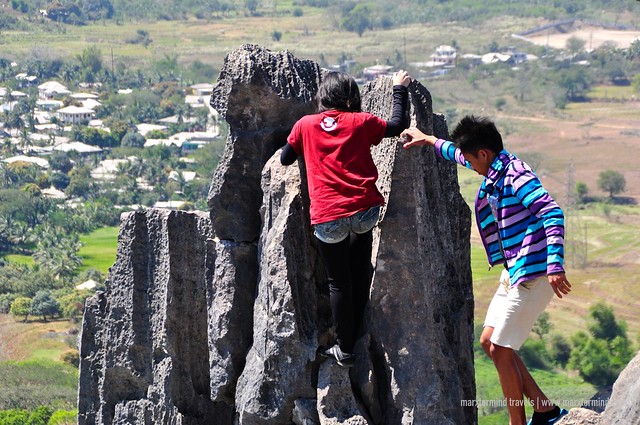 We reached the upper part of the rock formation in about half an hour. It was a challenging climb but the view from the top paid it off. There was a group who had arrived in the area ahead of us so we waited for a couple of minutes for our turn to take a picture at the Lioness Back. Good thing that the area wasn’t crowded because we were able to enjoy the place more and had amazing pictures without the pressure of finishing our photo moments so quickly. 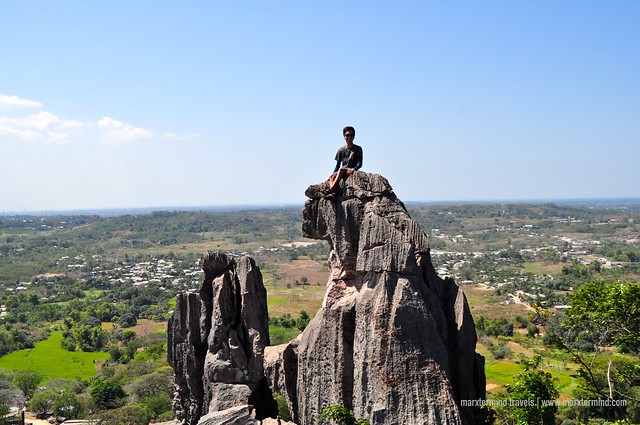 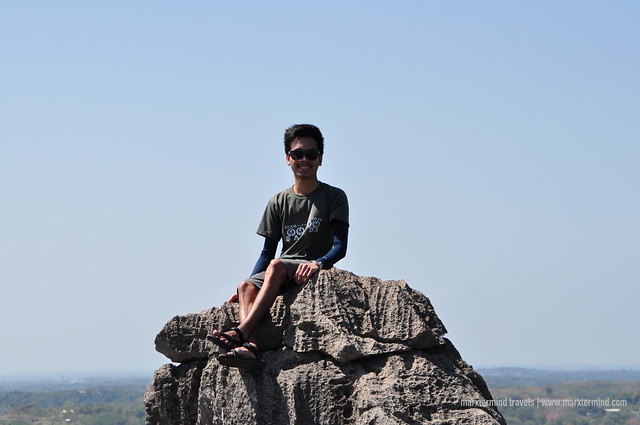 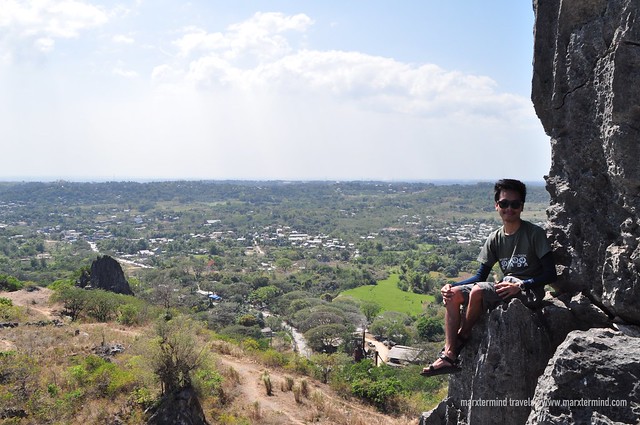 It was Elal who went first at the lioness back, then me, and lastly Marcos. Getting to the top was kind of easy, but standing up at the top of the rock formation was terrifying, most especially when the wind blows. At times I thought the wind was going to blow me away. But I took my courage and continued with my death defying photos and stunts. 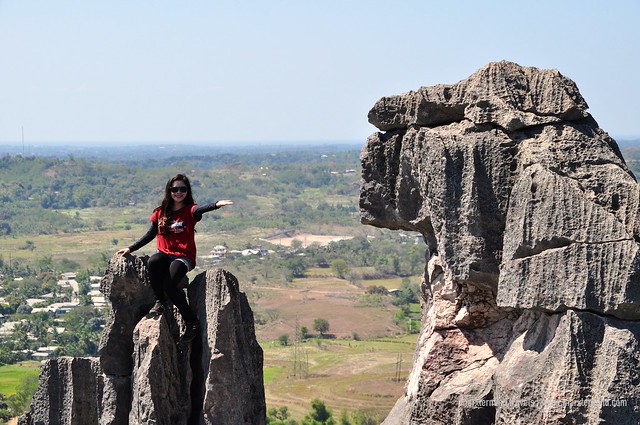 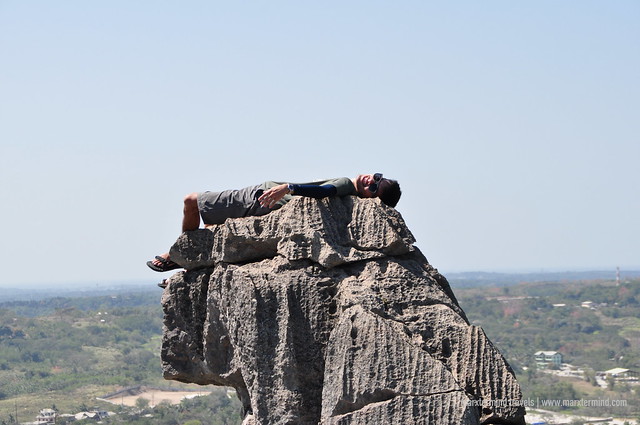 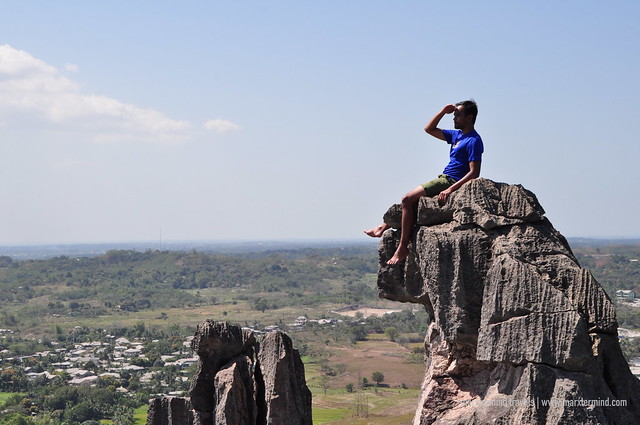 After getting satisfied with our photos, we descended and went to the other rock formation that is just a few meters away from the Lioness Back, the Rhino rock formation. 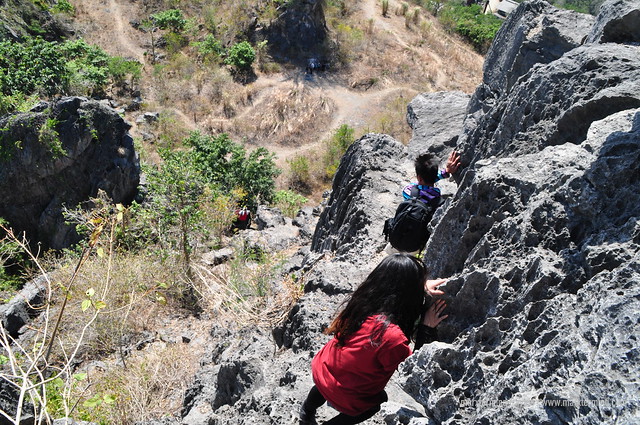 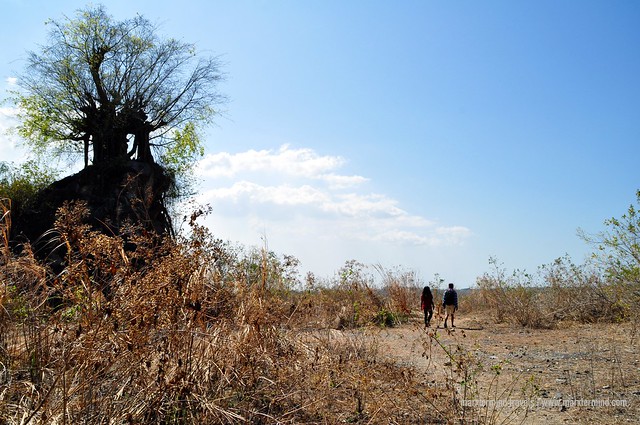 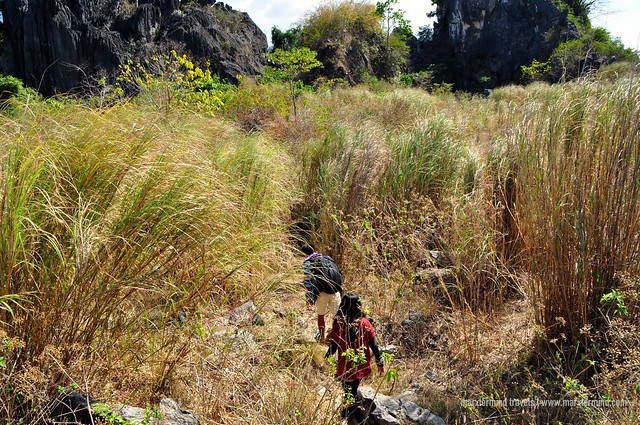 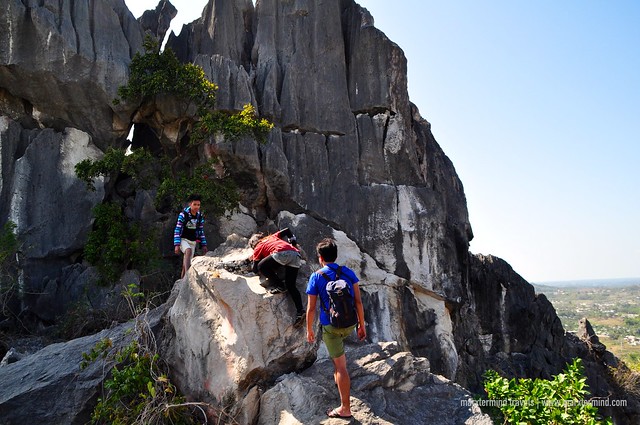 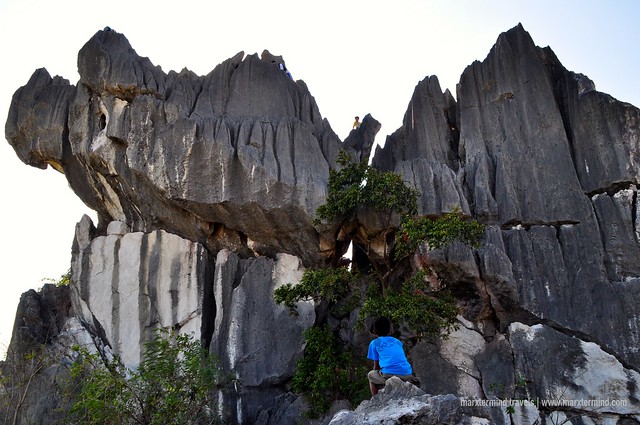 The rock edges at the Rhino rock formation are sharper. The rock is rigid and more punishing to climb. I suggest wear hand gloves to protect hands from scratches. With the help of our guide, we were able to reach the topmost part of the Rhino rock formation securely. We then took some pictures. The view is equally nice like what we had from the previous rock formation but I must say that the Lioness Back is more picturesque and noteworthy. 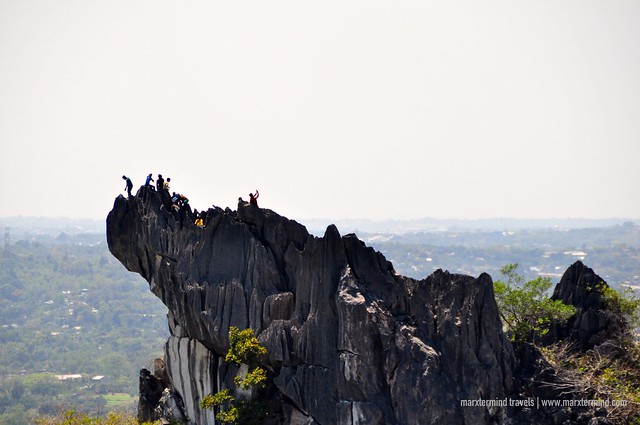 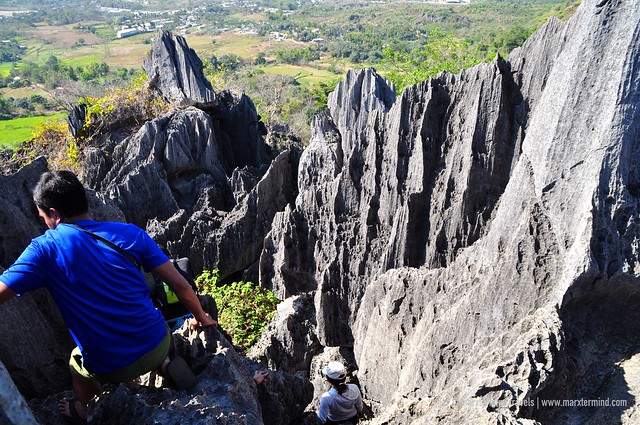 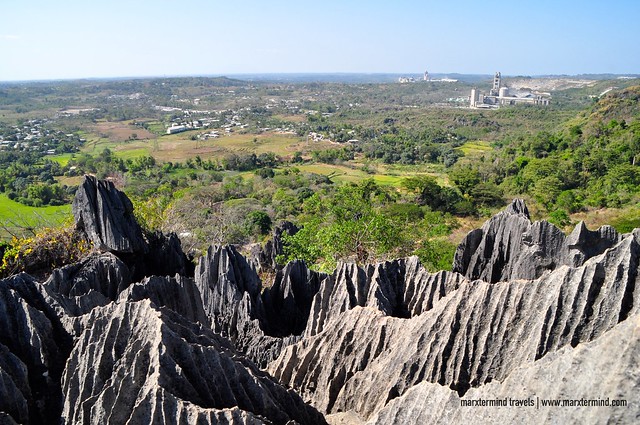 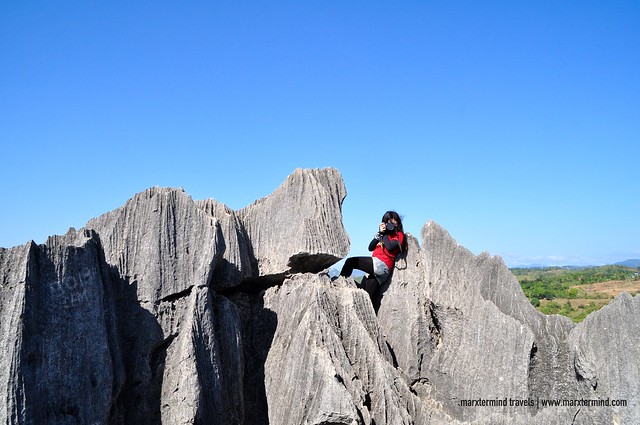 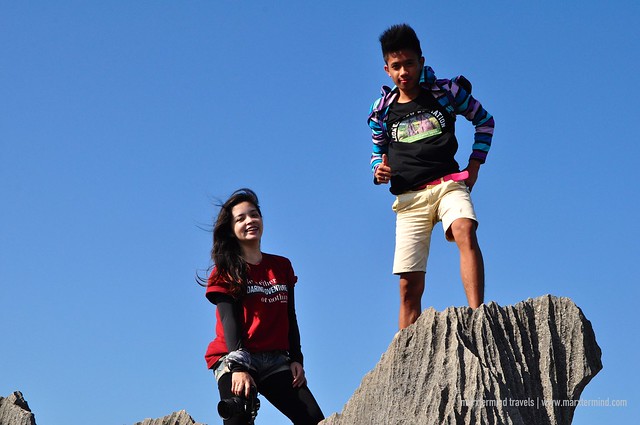 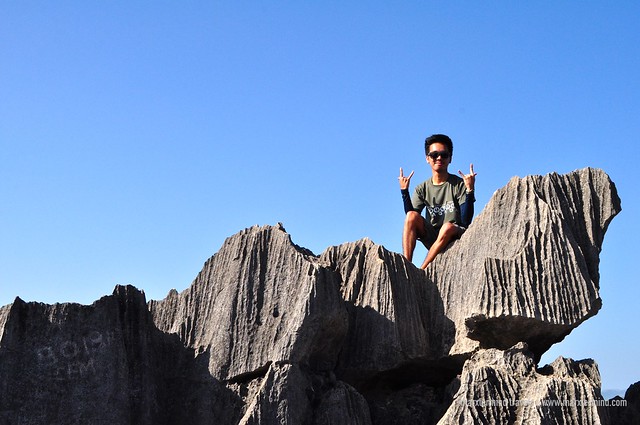 At around 3:00 PM, we descended from the Rhino rock formation and proceeded to our guide’s house. We took a rest for a while before we headed back to the city.

As of the moment, there’s no standard rate for guides in Lioness Back and Rhino rock formations. We were a group of three, we thought that the activity was really exhausting and challenging so we paid our guide, Kenneth, a good amount to recompense what he had done to us. He had really taken good care of us and was really helpful and attentive especially when asking him to take us a picture. ☺