Last Days in Australia, Ending my Vacation in Gold Coast

Gold Coast was my last destination in Australia before I went back home to the Philippines. But before I headed back to my homeland, I spent two days in the city and went around to see some of its nicest beaches. My relatives accompanied me till the end of my stay. They toured me around for the last time and I was really grateful about it. 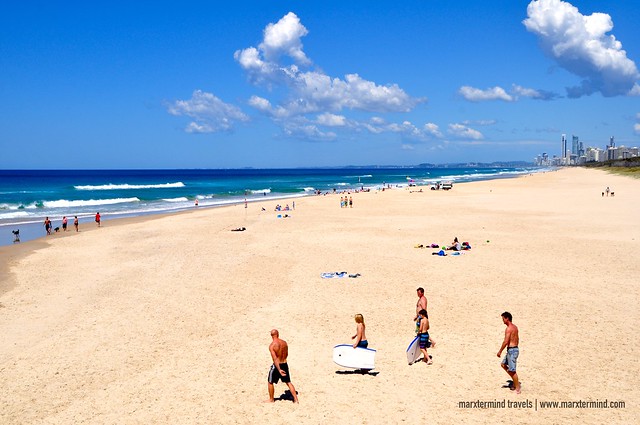 Gold Coast is a metropolitan region located south of Brisbane. It is a 2-hour drive from Brisbane to get there. Gold Coast is home to a wonderful range of natural scenic beauty. The city is famous to its long sandy beaches and surfing spots.

Gold Coast is boasting 57 kilometers of stunning coastline and golden beaches. With that, I believe there was nothing more fitting to end my vacation than to go beach hopping. For three days in Gold Coast, my relatives brought me to some of the spectacular beaches in the area. 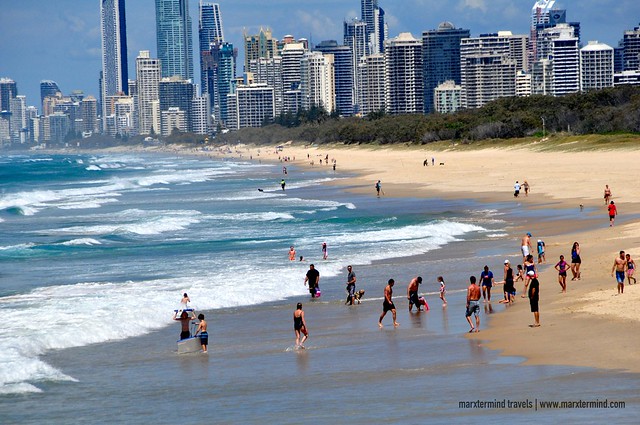 We began our beach hopping by going to The Spit. As the name implies, it is a permanent sand spit. The place extends to the seaway and the landmass consists mostly of parkland.

The Spit is a great place to go fishing, boating and relaxing. It is also a nice place to have a picnic, go for a walk along the beach or just people watch, which what we had done. It was a lovely day that day. The water was inviting. Watching the people enjoying the beach, I got envied to take a swim as well. I would want to join the crowd but then again, I wasn’t ready because I forgot to bring extra clothes. 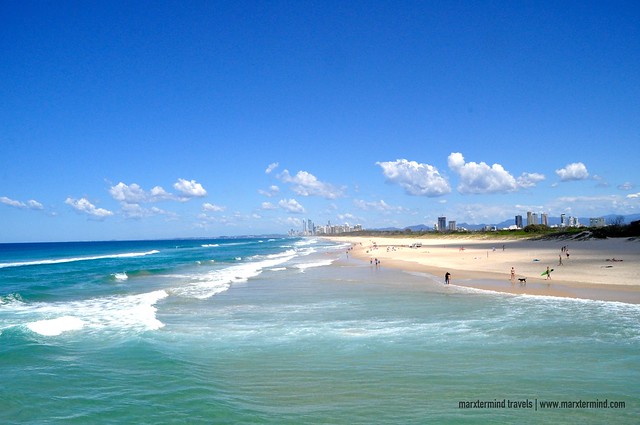 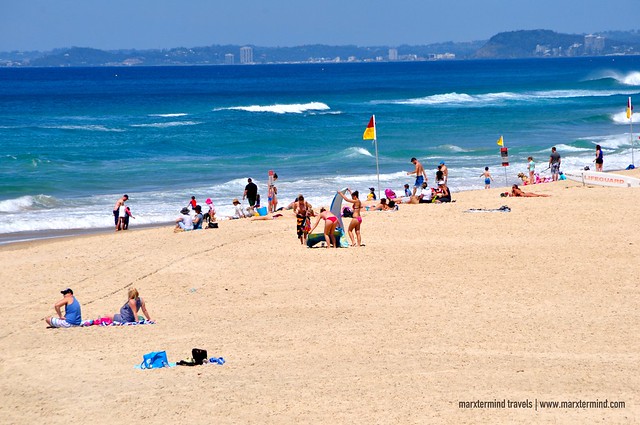 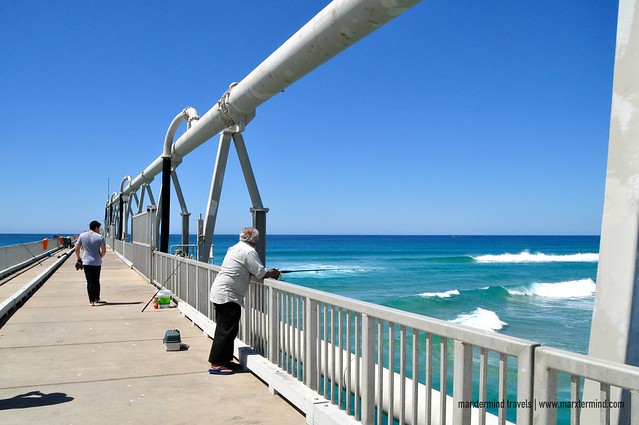 I just nourished the moment seeing how happy the place was. We also saw some surfers. 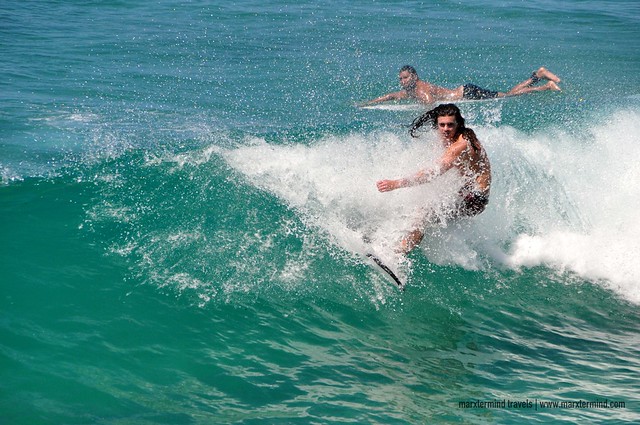 The Spit was really a nice place for me. If there would be one that I would like to visit again in Gold Coast, then it would be this place.

We dropped by at the Main Beach and had a look of the happenings. The Main Beach was a little more crowded than The Spit. It has a nice beach and great ambiance that was also perfect for picnic, relaxing and people watching. 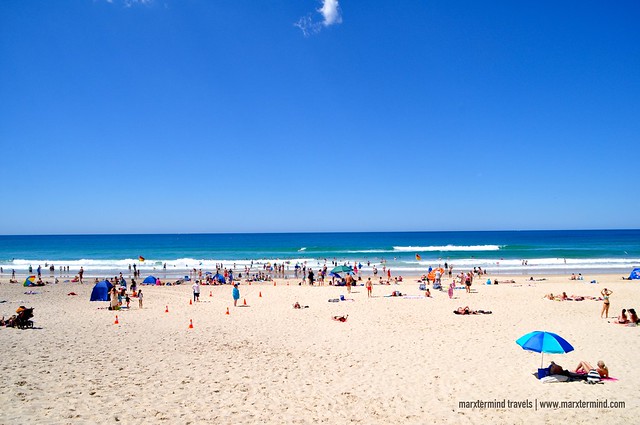 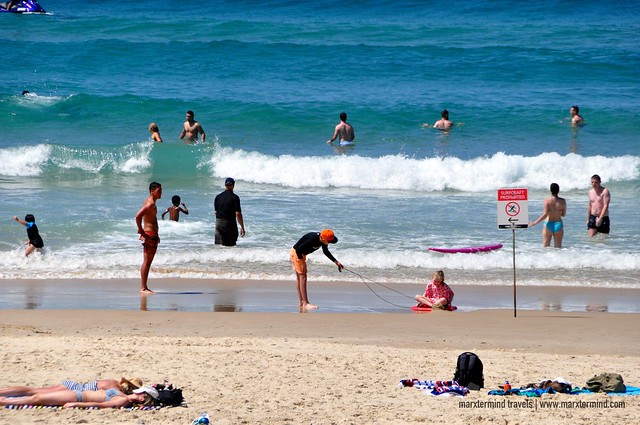 Main Beach was said to be an affluent beachside suburb in Gold Coast. This place was also a popular spot for surfing.But we didn’t stay longer here, so after a couple of minutes we left the Main Beach and went to the Surfers Paradise to have our lunch.

After taking our lunch in one of the Thai restaurants located along Surfers Paradise Boulevard, we went for a walk towards the beach area. We passed by the Centro Surfers Paradise and exited towards The Esplanade. 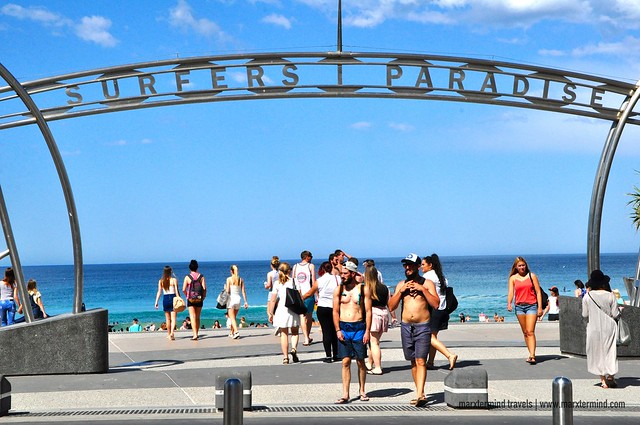 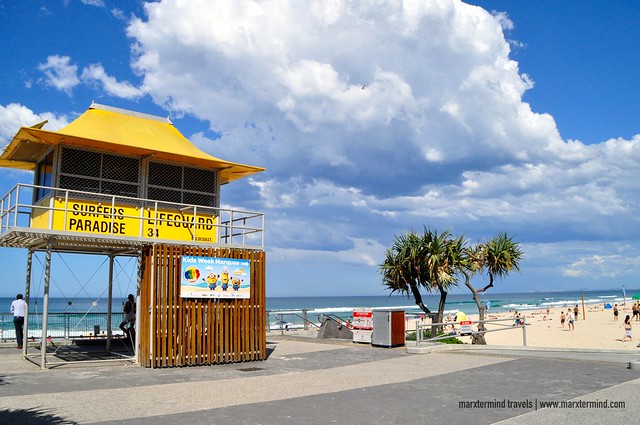 Surfers Paradise is the entertainment playground and tourism center in Gold Coast. It features high-rise buildings that are best-known trademark of the city’s skyline.

This place in Gold Coast was energetic and exciting. There were a lot of things and activities going around. The place was jam-packed and it has a great social scene. 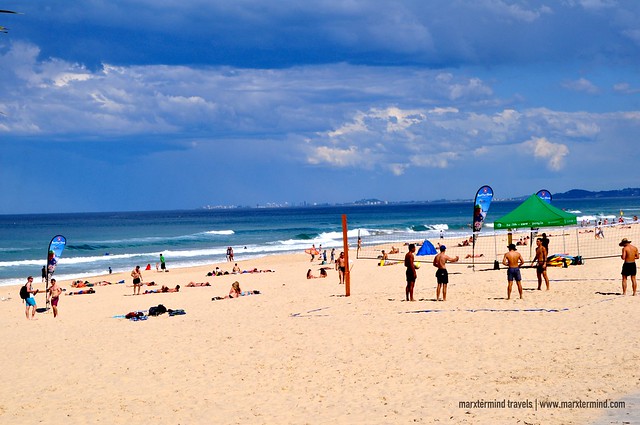 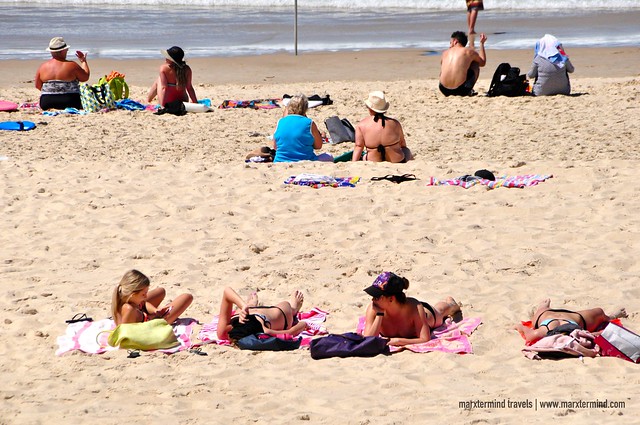 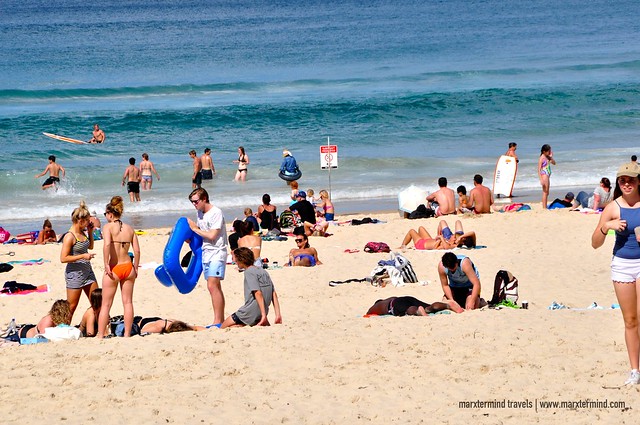 The beach at the Surfers Paradise is a golden stretch of soft sand. It also provides a perfect ambiance to relax and go people watching. It is also a great place to swim and surf.

If you want a more peaceful and serene place to go in Gold Coast, then Burleigh Heads Beach is the one for you. It was late afternoon when we visited this place and people here weren’t that packed compared to the first three beaches that we went to. This place wasn’t rowdy and noisy. And people go here to relax and spend some time away from the bustling city. 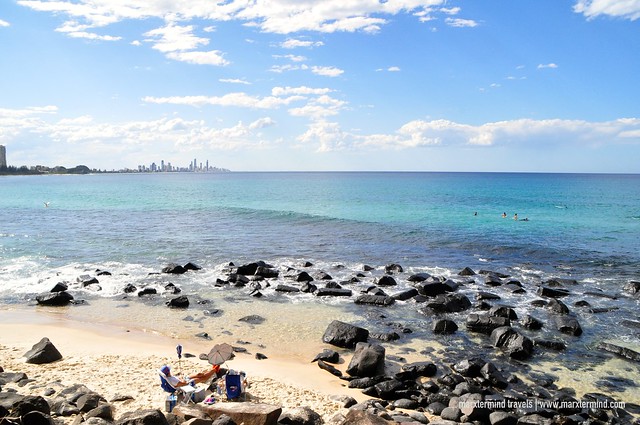 When in Burleigh Heads, don’t miss to visit the Burleigh Heads National Park. We went for a trek uphill and from the top; we saw an astounding view of the ocean. We also saw on its other side the suburb that sits next to Burleigh Heads, which is the Tallebudgera. We also saw another lovely beach area. It would have been better if we were also able to visit that place but unfortunately, it was already getting late and we have to leave the area already. 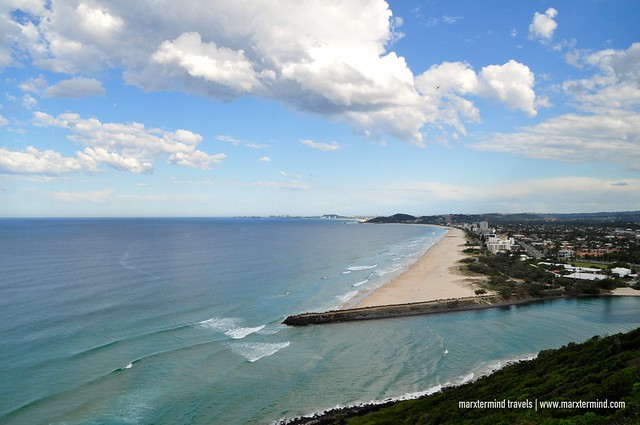 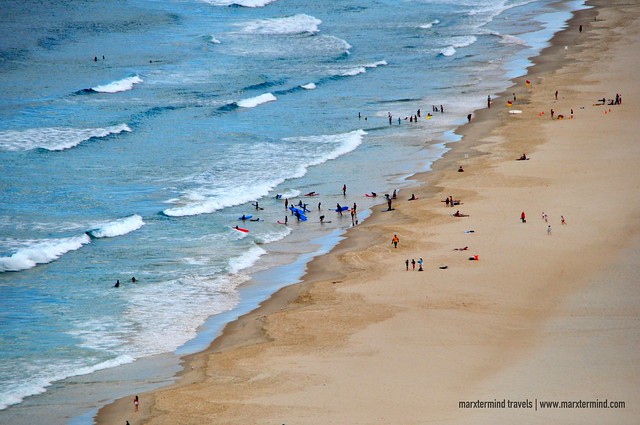 We stayed at Mantra Twin Towns Hotel & Apartments in Coolangatta. The place is at the Southern end of Gold Coast. Our room was a Twin Room. It was air-conditioned. It has two beds and has a private bathroom. It also has a private balcony that offers a sneak peek of the ocean. 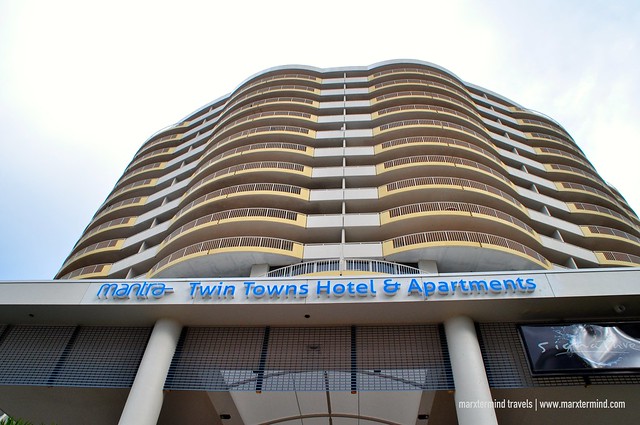 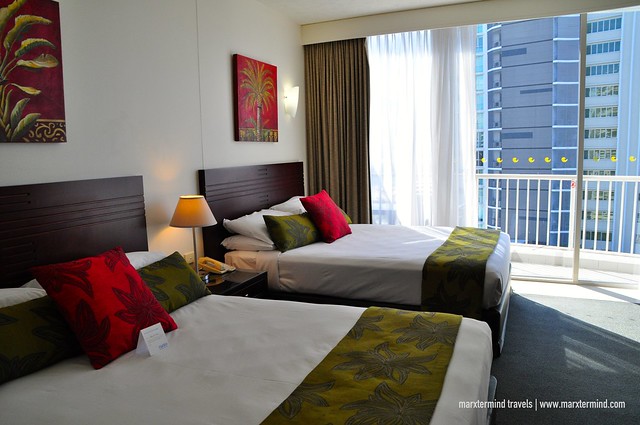 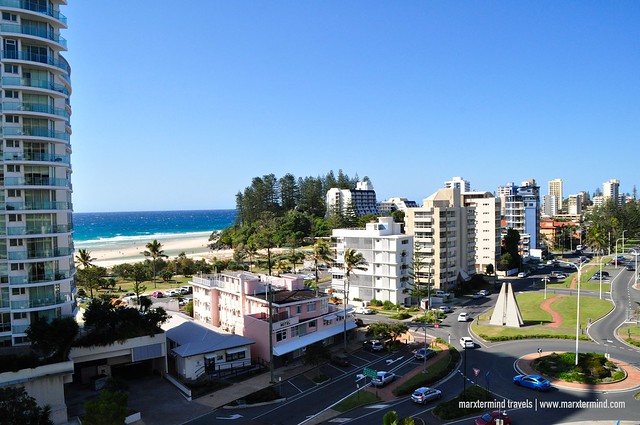 The room was beautifully appointed with cable television, phone, refrigerator, coffee and tea making facilities and some other equipment. It also has free Wi-Fi.

The hotel is an ideal place to stay because it is close to all the main attractions in Coolangatta. The beach is also just a stone’s throw away. 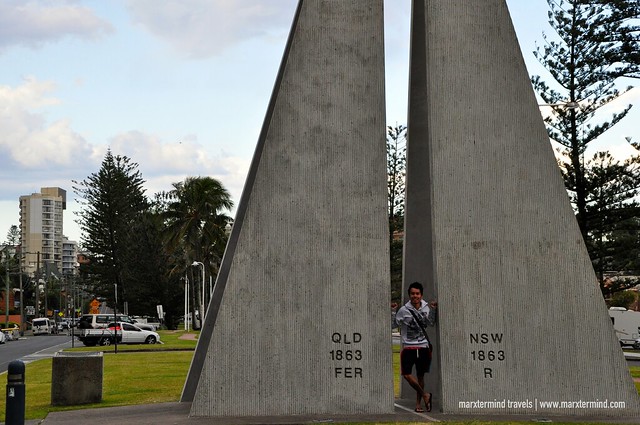 Isn’t it cool to be in two states at the same time?

We made a quick visit to Kirra Beach that is just a few kilometers away from where we were staying in Gold Coast. Kirra is a small area to enjoy the beautiful beach and go for surfing. The ambiance was laid back and easy. It is another great beach destination in Gold Coast that has good places to swim and relax. 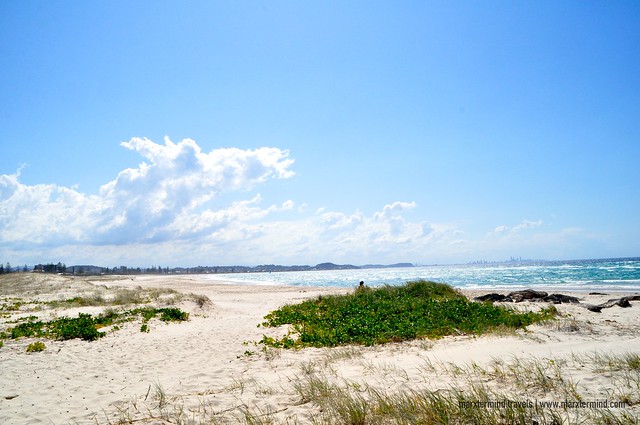 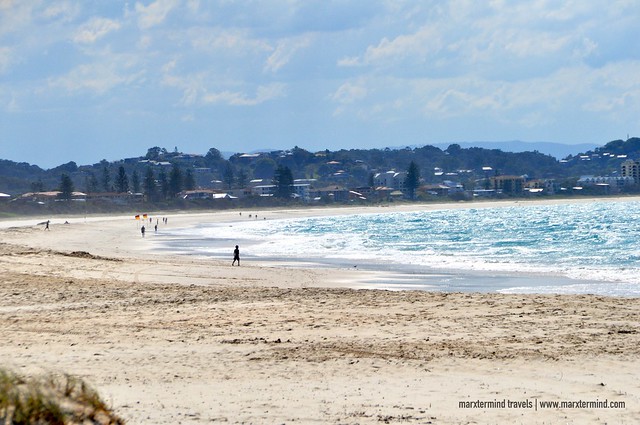 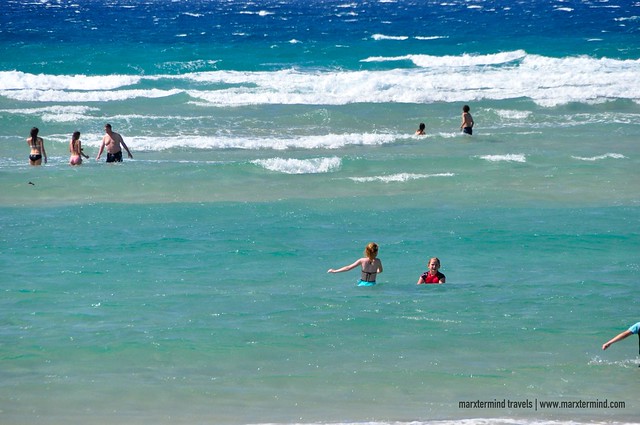 It was too bad that I didn’t able to take a swim. I would want to go to the water but it was too cold. See, I was still wearing my jumper even though it was sunny. 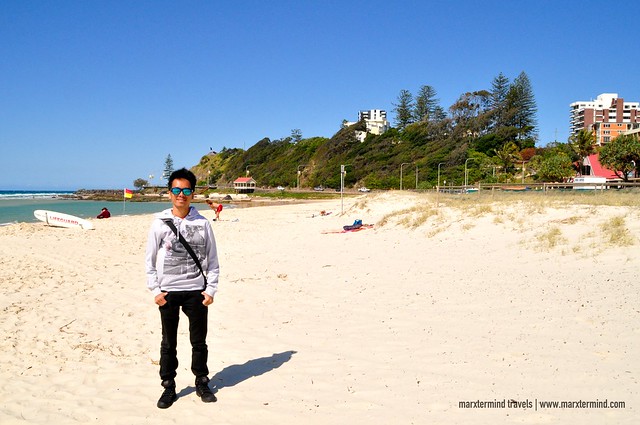 The beaches in Coolangatta have some of the best surfing condition and most scenic setting in Gold Coast. It was just unlucky that the weather had suddenly become gloomy when we went to one of Coolangatta’s beaches. But that didn’t stop us to go for a walk. The beach was vast. It wasn’t that crowded. It would have been more picturesque if it was sunny but, we found the beach wonderful. 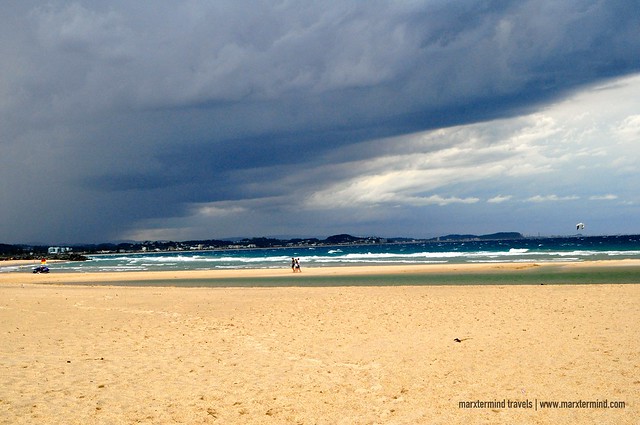 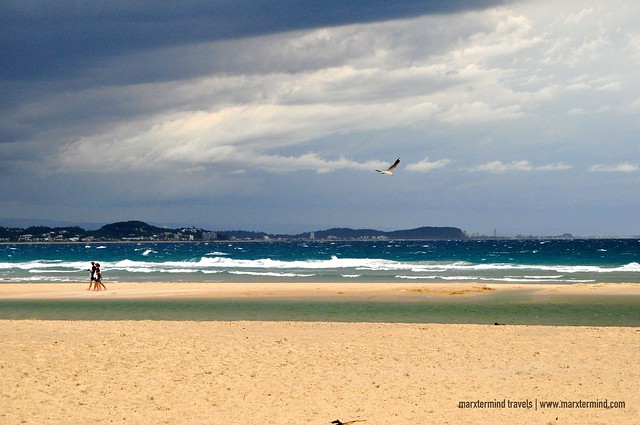 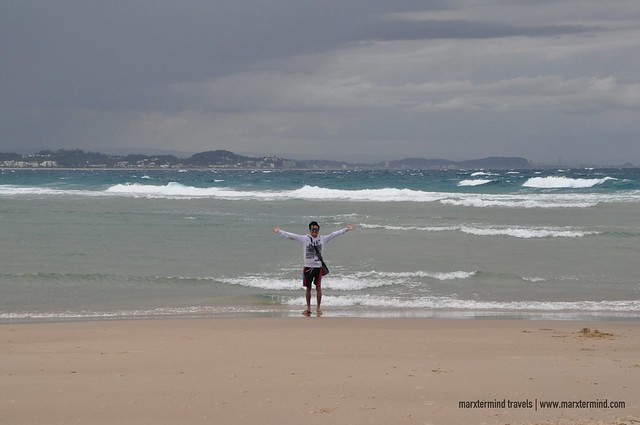 When the rain suddenly poured, we quickly went back to our hotel. I would have wanted to get around the area and explore more of Coolangatta but I lost interest because of the heavy rain. We then just decided to spend the rest of our day at the hotel.

My flight going back home was from Gold Coast with a stopover in Singapore. It was a sad moment for me because I still wanted to stay longer in Australia. But I already have to go back home for work – and save money again for my next trip.

My Aunt and Uncle accompanied me to the airport for my flight. It was very accessible that our hotel was just near the airport. It only took us about 15 minutes drive to get there. I was really sad leaving Australia. I felt I wasn’t ready to go back home yet. My original flight was actually got retimed and I had option to rebook it to a later day. If I only had no work the next day, then I could have extended my stay even for just a day. But then again, when I was thinking about my almost three weeks stay in the country; I thought it was a great one. I have a lot of memorable experiences that I will cherish forever. I have so many things to be grateful of because of this trip. 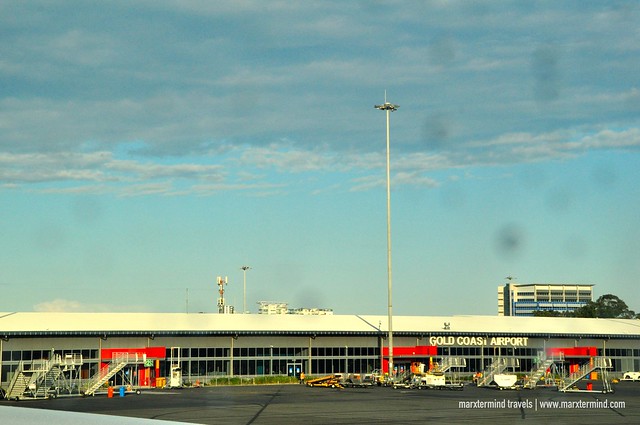 Scoot flies to Gold Coast from Manila via Singapore. For more information, you can visit the official website at www.flyscoot.com. Get the latest updates with the airline’s promo fares and travel deals through Seat Sale PH.