I lived in Camarines Sur for 3 years when I was still a kid but I’d never heard of Caramoan until Survivor came. Camarimes Sur should be thankful to Survivor as it has given Caramoan the fame and stand of one of the prime destination in the country. I have seen how Cam Sur rises in terms of tourism. Naga City, which is part of Camarines Sur, has been known for Peñafrancia Festival. As time flies, the region evolves from building the first SM in Bicol Region in Naga City, the impressive Cam Sur Watersports Complex in Pili and the boost of Caramoan Peninsula. These are just few places to visit in Cam Sur, and I know there are still great places to explore (and I hope to keep as is) in the region.

Since the first jeepney trip from our town to Pili is still at 6:00 AM, me and my friends slept over at our relatives house in Bula Centro. At 4:00 AM, we hired a tricycle that took us to Crossing Anayan (near Pili Centro). If you’re coming from Naga, I believe there are public vans going to Sabang Beach / port.

As soon as we arrived at Sabang port, we paid PHP 10.00 for the floater (wala na yung buhat-buhat or papasanin sa likod) to take you to the ferry / motor boat. 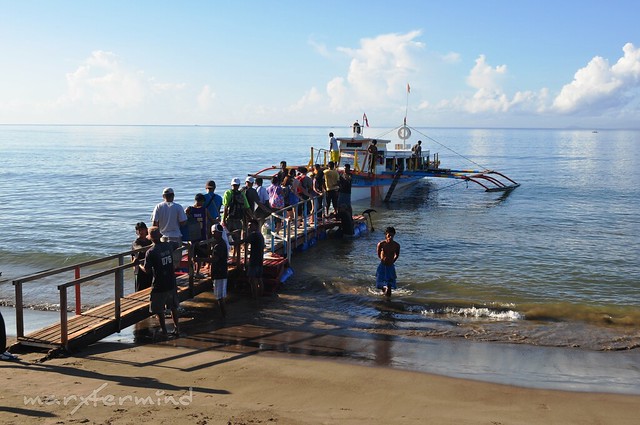 Tip: Sit at the left side of the ferry / motorboat for full view of the green mountains, right side is a view of the blue sea with Mt. Mayon from afar.

The motorboat was almost full when we arrived, so I had no choice but to sit besides the driver (felt like I was the co-captain of our trip!). The motorboat fare costs PHP 120.00 with 1 hour and 45 minutes. Sarap sanang matulog since nakakaantok umupo sa captain’s seat, at lahat ng hangin nasasagap ko dahil sa nakabukas na window shield kaya lang baka mahulog ako deretso tubig ang bagsak ko, elevated kasi ang seat nung captain! 🙂

Moving on, the sea was calm, it was indeed my calmest boat ride I ever had. According to the captain, the sea waves are notorious during October.

At 9:00 AM, we arrived at Guijalo Port. From there our guide was already waiting. For this trip, it was my aunt who took charge of contacting the boatman as well as our accommodations. (Hassle-free but worry free since I have no idea yet of what has been discussed between the guide and my aunt, hope it could turn out well according to my itinerary.)

Moving on, from port we hired a tricycle that took us to our accommodation. I contacted Rex Tourist Inn but I had never got a text message again from their last reply so I gave it up and just go wherever our guide lead us.

From Guijalo port, it took us about 30 minutes (with PHP 20.00 each fare) until we reached our accommodation. It wasn’t commercialized yet and it was behind the owner / family’s house. The room with private toilet costs PHP 1,800.00 and ofcourse we haggled. I left it with my aunts since they can speak Bicolano fluently (mas madaling makipagusap). So we got the room at PHP 1,500 for the six of us.

At first, we were hesitant to get the room since it was located at the centro and we wanted to stay near the Bikal Port. But since we were already here and we didn’t know if there were still rooms available near Bikal Port since it’s peak season, we settled here. We fixed our things then ate first before we started our island hopping. We asked our tricycle driver if he can had us transport back and forth, and he agreed. We asked him to go back after 30 minutes. 🙂

After we’re done eating and had our things fixed, we’re ready to go and explore the islands of Caramoan. Our tricycle driver came and took us to Bikal port along with our guide. From Centro, it took us about 25 minutes to get to the Bikal Port with PHP 30.00 fare each. At the Bikal port, we paid PHP 30.00 for Caramoan environmental fee. We were surprised that the port looked like a port of mud! It was not a seaport during low tide. I can’t believe that there are muds under the sea. So we need to ride a small banca for us to get to our boat. We paid PHP 180 for the banca. 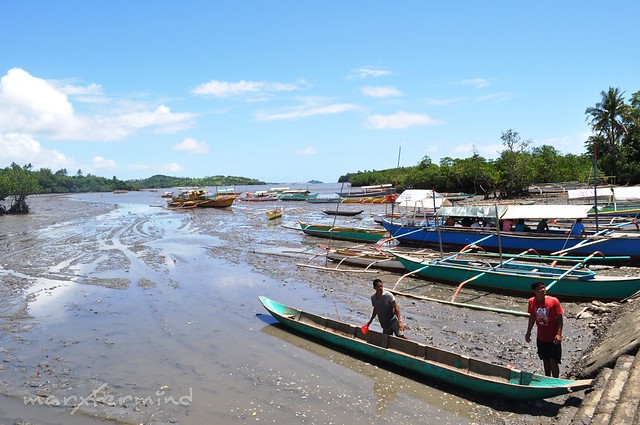 We were not barely moving because we might end up swimming in the sea of mud. Just look at the picture above and you’ll imagine how’s our situation while we’re on the small banca. 🙂

At last, we came to our boat safe! It was already 11:30 AM when we started the island hopping.

By the way, we got the island hopping for PHP 2,500. We thought we can go to all the islands of Caramoan or any islands that we wanted but we were wrong, there are only selected islands that we can go to. And additional price for the remaining islands which can be done the next day. We were saddened, and we thought if we’ll still pursue for the island hopping the next day. But it was too early to think, we’re all here to relax and have fun so we just keep it hanging until we have our decision. 🙂 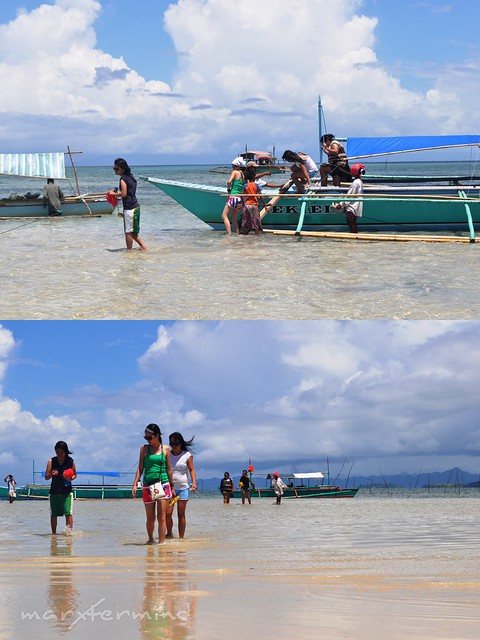 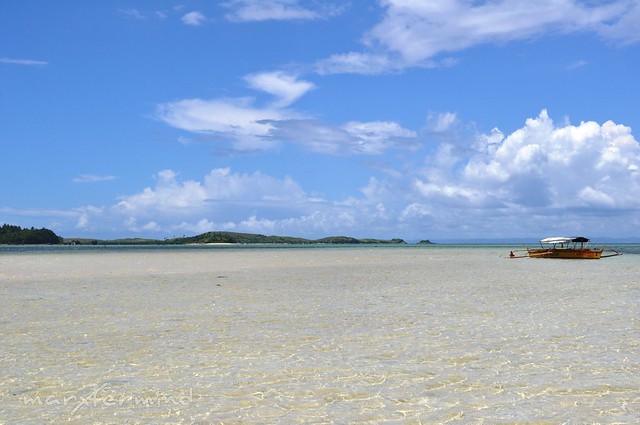 It’s a must to visit the island while it was low tide as the vast sand bar is visible during that time. It was the finest and most astounding sand bar I’ve ever seen, the vast fine sand. 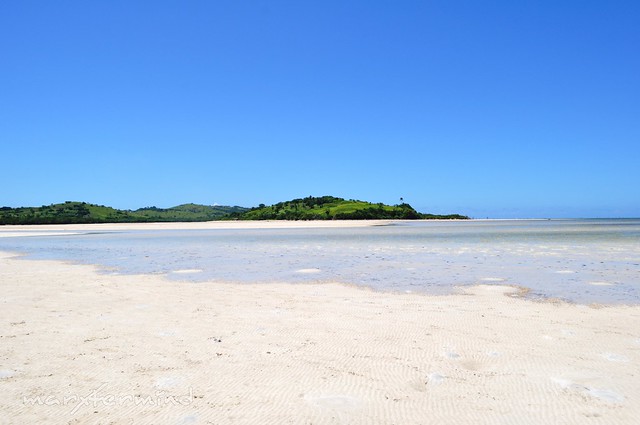 We were amazed how the place looks like and we can’t resist to take more and more photos. Of course, we had jump shots! 🙂 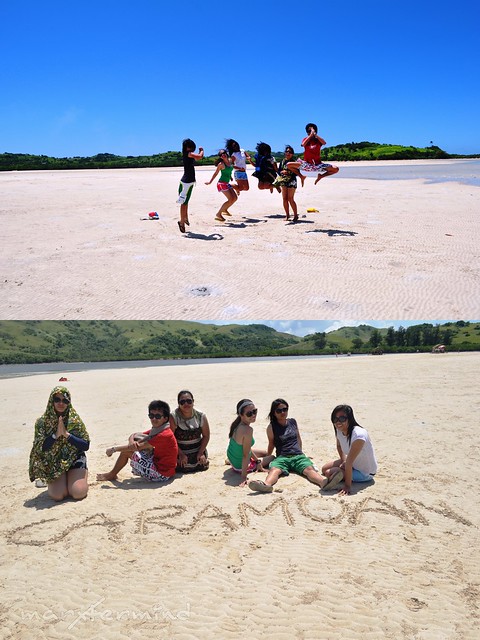 As time goes by, the tide is getting higher and the sand bar is getting smaller. So we’ve decided to go back so we can move on to the next island. 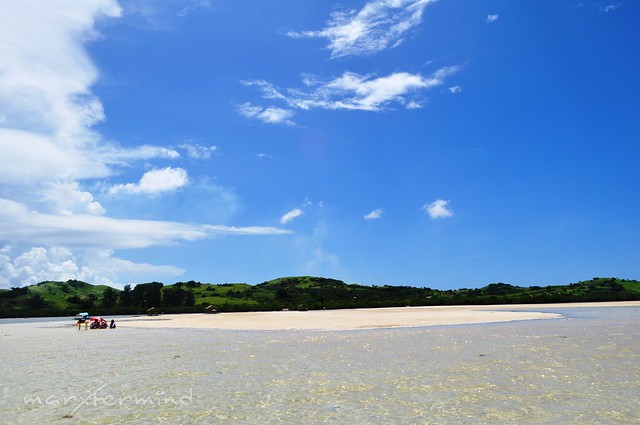 But we can’t resist the water, so we took a quick dip and enjoyed the water. It was like Cagbalete Island, there are no huge waves, super babaw! But one thing I don’t like about the sea is it was itchy. Maalat ang dagat! 🙂

After a while, umahon na kami. We moved on to the next island.

From Manlawi Island is a 15 minutes boat ride going to Bugtong Beach. The boat didn’t docked in the island anymore as it was still low tide (we’re just in the middle of the sea)! When the boat stopped, the boatman asked us if we want to swim here and we said OK. So I was the only guy in our group, my companions asked me to check if the sea was deep. So nasa gitna kami ng dagat at bumaba ako pero hawak pa din sa katig ng banka, baka kasi malalim. Pero nasa bewang plang yung nalulublob sa katawan ko eh naghysterical na ako kasi wala akong makapang sea bed. Hahaha! So nag-panic ako pabalik ng boat knowing na mababaw lang pla sya, hanggang dibdib ko! 🙂

So all of us jumped off from the boat and enjoyed the beach of Bugtong Island. There are big rocks on the side of the island but we didn’t take time to go there anymore because we’re scared and we’re too far from the shore. By the way, did I mention that we are the only persons there at that time? Yey, beach, beach, beach! 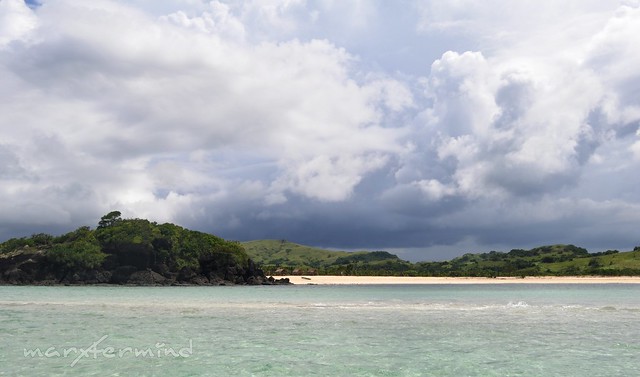 The water is clear and there are no big waves at all. You can go snorkeling here as there are corals on some parts. We also saw some star fish! 🙂

After a while, we went back to our boat and moved on to the next island. Before there was a small sand bar or shore that connects the island to the other, so one can trek to the light house from the Cotivas Island. According to our boatman, the small portion of shore or sand bar was destroyed by typhoon. 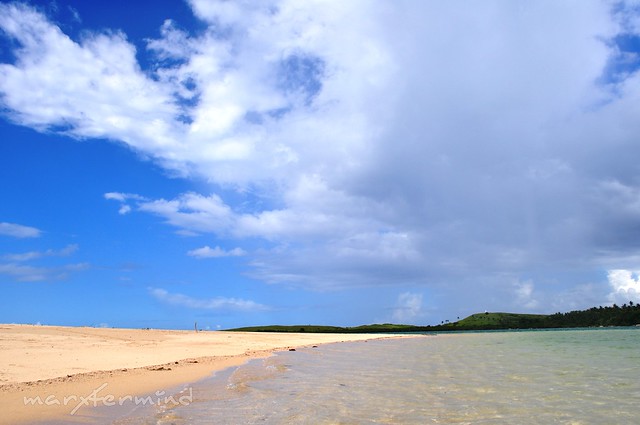 Cotivas Island is just like a typical island with nipa hut stands alone in the middle. 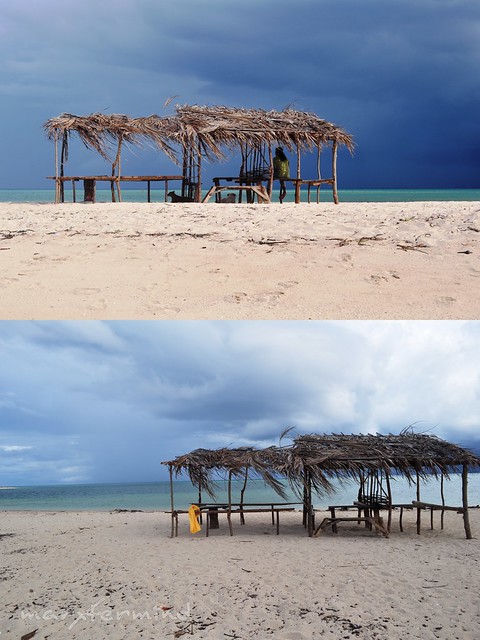 The shore is at the side part of the island, and there were trees and unfrequented place on the other part. The water was hot while the sky became gloomy. There’s a heavy rain coming. I took a dip for a few minutes just to experience how it was.

As long as I wanted to explore the other part of the island, we don’t have time anymore as it was already 3:00 PM and we still have one island and grotto to visit. So we went back to our boat and left the island. From Cotivas Island, we headed straight (kami na ang sumalubong sa malakas na ulan). A heavy rain was along our way, and we were unprepared. The waves became bigger, yet we let ourselves calm and easy! After awhile, there’s the sun again – we were able to surpass it! Thank God! 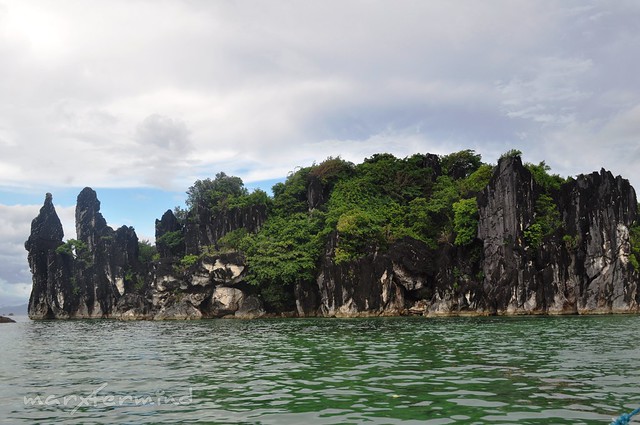 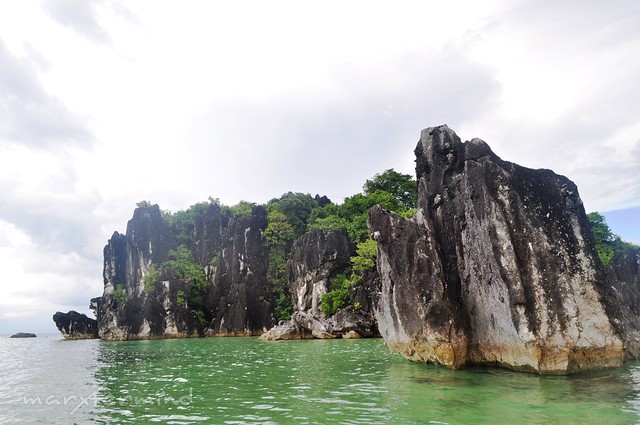 We explored the island. The island has a short shore line since it was already high tide. There are few people in the island exploring as well. Same with Cotivas Beach, the water is also hot. Nagtampisaw lang!

And here’s the view if you of the other side of the island. 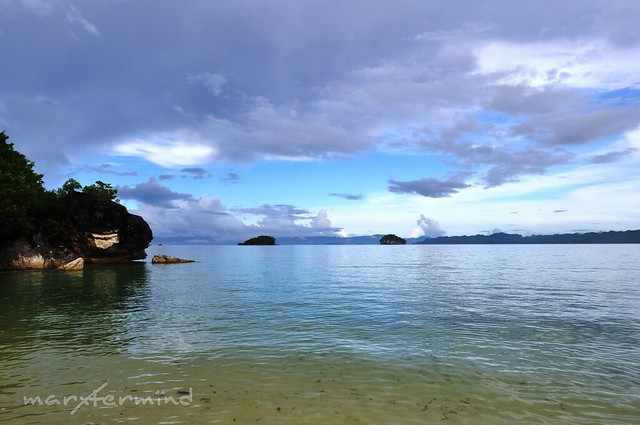 The sea of Caramoan Peninsula is really peaceful, indeed. After a while, we’ve decided to move on to our next destination, the 500+ steps to Grotto (next post na lang)! As we sailed back, we were able to pass by this structure used by Survivor. 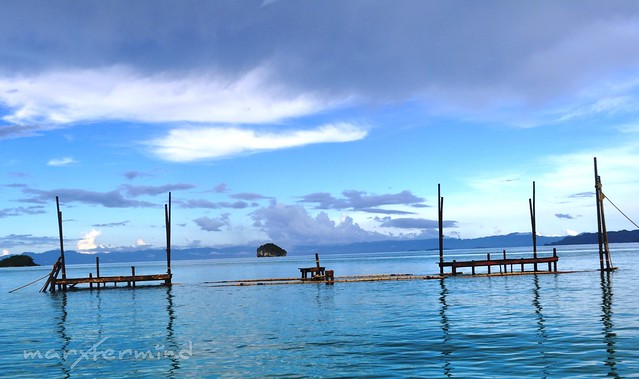 Caramoan is truly scenic, but it wasn’t the best beach for me. Maybe if I can go to Gota Beach, then something might change. 🙂

Overall, I had fun with trip. I waited for so long for this to happen. I asked my relatives to come with me 2 years ago and imagine how long it was until it happened.

Like my CWC experience, I also felt short with this trip. One day is not enough to explore everything and it only mean one thing, I need to come back. And yes I will come back for more. Gota Beach for my next goal! 🙂