Bandung was not originally part of my destinations to visit in Indonesia when I was planning for my week-long trip in the country. But I was glad that I included it when my friend suggested this place. I was stunned with some places that could be explored in and outside the city. I got excited. The sad part though is that our friend wasn’t able to join us on this leg because of his work schedule. He cut short the trip after Lombok and went back to Manila. 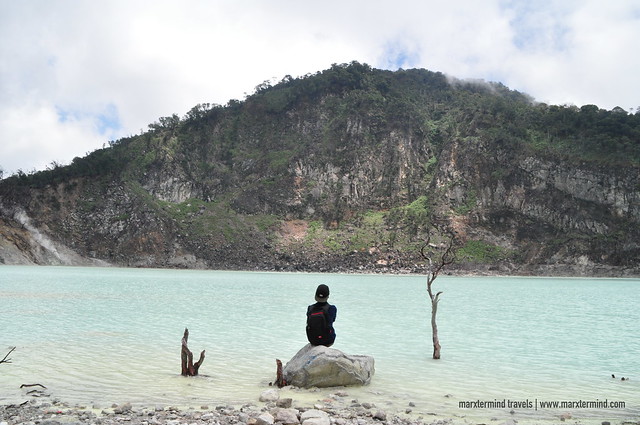 Bandung is the capital of West Java province. From Bali, our flight took 2 hours. Bandung was known for its beautiful buildings and scenery hence why it is called as Paris van Java. There are many historical buildings and museums that can be found in the city. It had also earned its nickname of Kota Kembang, which means the Flower City since Bandung used to have a lot of flowers. But now, Bandung is well known for its universities, garments and a place for gastronomic adventures making it a popular weekend destination most especially for people from Jakarta.

But aside from these things, Bandung is also a great base to explore some interesting places situated in the neighboring cities and towns. Surrounded by string of mountains, there are number of tourist attractions, mountain resorts and adventure activities that can be visited and done. And with these many exciting places to see, we were glad that we were able to explore some of those even if we only had three days.

Honestly, we didn’t have any solid itinerary when we went to Bandung. We listed some sites but that was it. It in fact came to my mind to just have a staycation but then again I realized it might be the first and last time that we will be here so we must go out and explore the city.

We started by going to Museum Geologi (Gelogical Museum). The museum houses a variety of collections on earth, the solar system and the fossils of human history. It sounded interesting to see but sadly, the museum was closed that time because of the holiday. Feeling a little dismayed, we just went to Gedung Sate that is only a short distance away from the museum. Gedung Sate is a public building in Bandung. This important structure is a grand Dutch colonial administration building dating to the 1920s but is now West Java’s government house. Another fact that I learned is that Gedung Sate actually means ‘satay building’. It was called as such because it resembles the shape of one of the Indonesian traditional dish called satay. 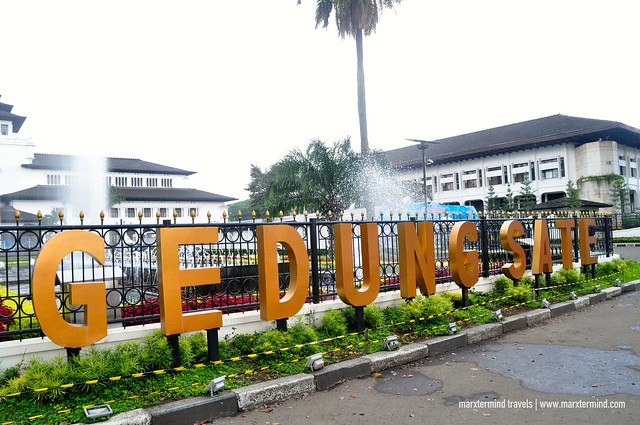 Factory outlet shopping is also a common activity to do in Bandung. The city is home to several clothing factory outlets. These stores are mostly located in Dago, Jalan Setiabudi and Jalan Riau. We checked these outlet stores in Dago and oh boy they are too many. We went inside each of these outlet stores and tried if we could find something cheap and interesting. My buddies were able to buy some clothes but sadly for me, I didn’t find any in my liking. But at least, I didn’t spend anything for shopping. I still had budget for our next destinations. 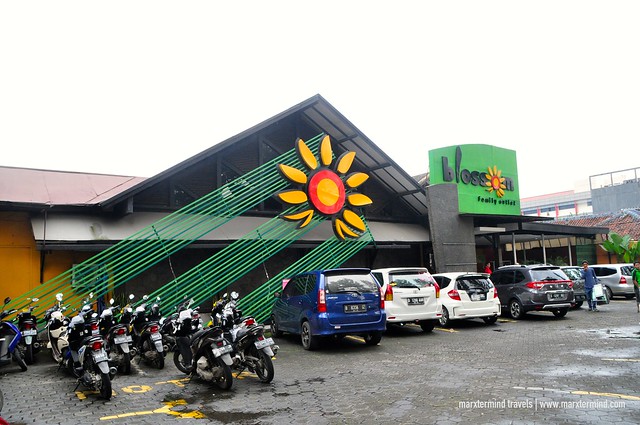 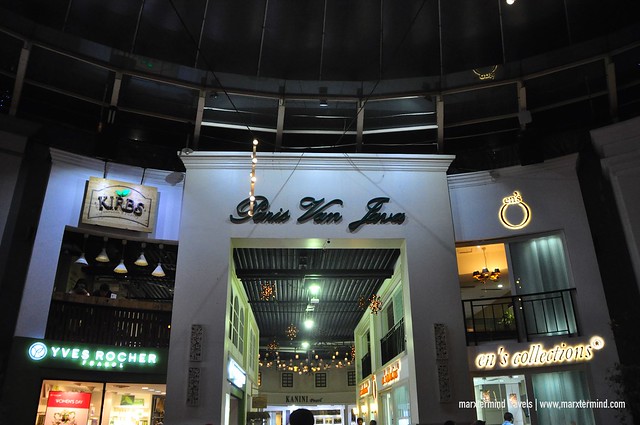 Situated near from our hotel, Paris van Java is also a nice place for shopping and dining. It’s actually a mall. We checked this place out when we went here for dinner.  We did some window-shopping. And my friend and I were so close to buying that cheap but useful jacket that we found in Giordano. And now we regretted that we didn’t buy that one.

We began our second day by going to the outskirts. At first, we planned to visit Kawah Putih but we were already late if we still push through with that plan as what our taxi driver told us. So we thought of just exploring some tourist attractions nearby. We had two destinations in mind, Floating Market and Farm House in Lembang. 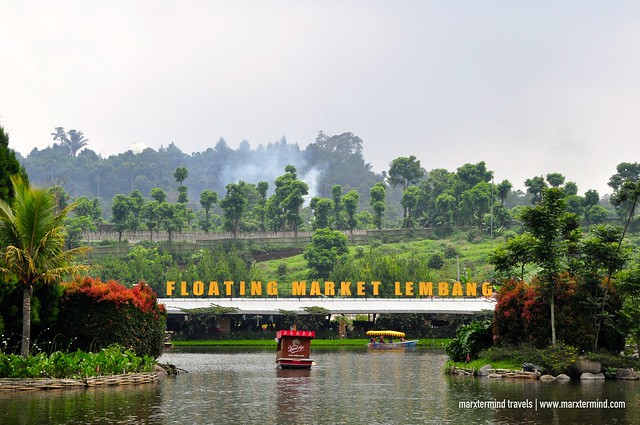 We asked our taxi driver if he could take us to these tourist spots and he agreed. Our first destination was the Floating Market. 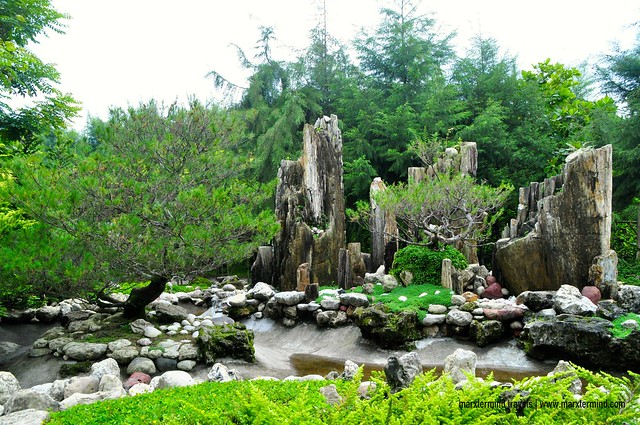 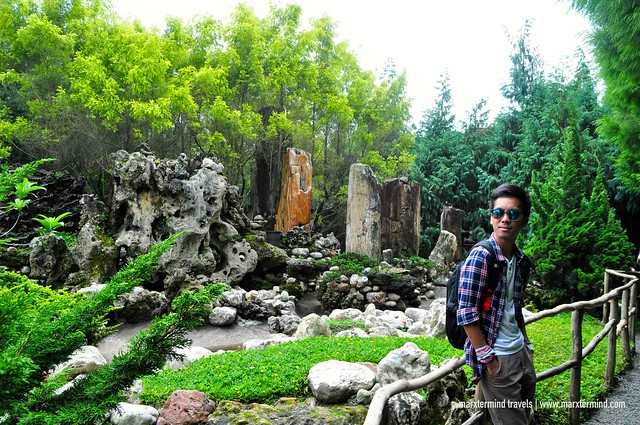 The Floating Market is located north of the city center. I was doubtful first of visiting this place because I thought it was just another touristy place but I was mistaken. Well, it was crowded because of the weekend but I found the place somehow enjoyable for me. It’s like a recreational park. There’s a lake in the middle surrounded by several attractions and gardens. The actual floating market is set up in the middle of the lake. There are stalls selling food and beverages. 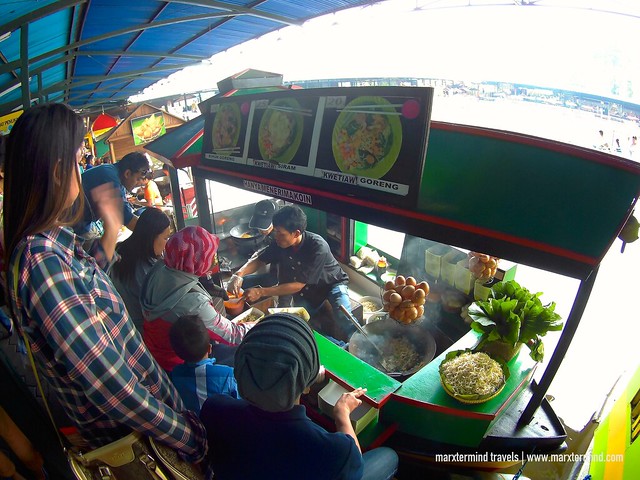 Farmhouse Susu Lembang is tourist attraction located in Lembang. The place looks promising with some European style houses setting. But visiting this on a weekend is not recommended. It is likely to become crowded. And unfortunately, it was long weekend when we went to this place. 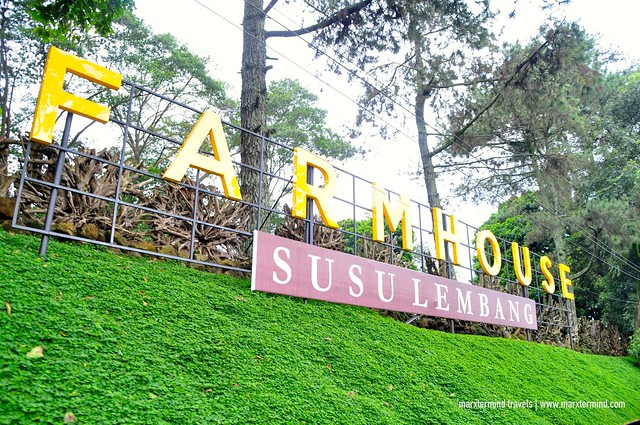 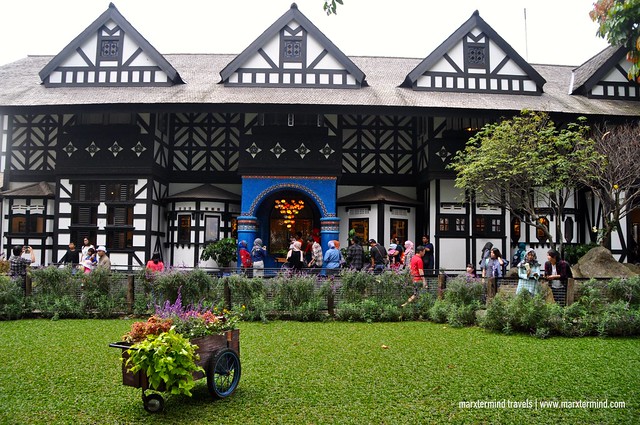 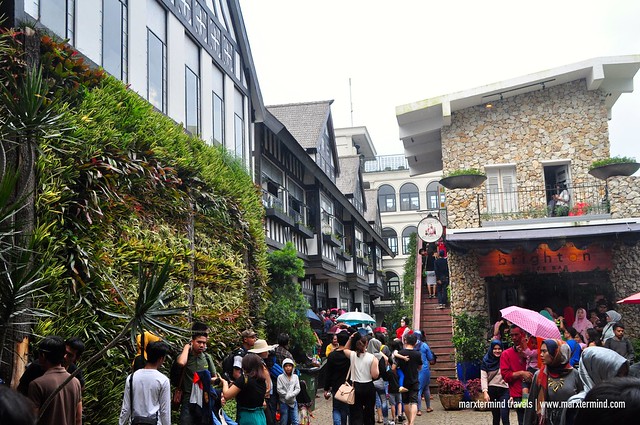 Entrance fee is IDR 20,000 (USD 2) per person. It comes with a free milk voucher or a sausage. And since I was hungry that time, I exchanged it for sausage. It was good.

I liked the place. If it wasn’t just crowded then I could actually have more and better photographs. The place is Instagrammable, as what they call it in social media. But what really interested us about Farmhouse in Lembang was the hobbit house. The hobbit house is the most photographed spot in the park. It is a replica of one of the settings of the famous movies Lord of the Rings and The Hobbits. Although crowded, we were not disappointed. We were able to have some tricks on our pictures to look like it wasn’t swarming with tourists at all. 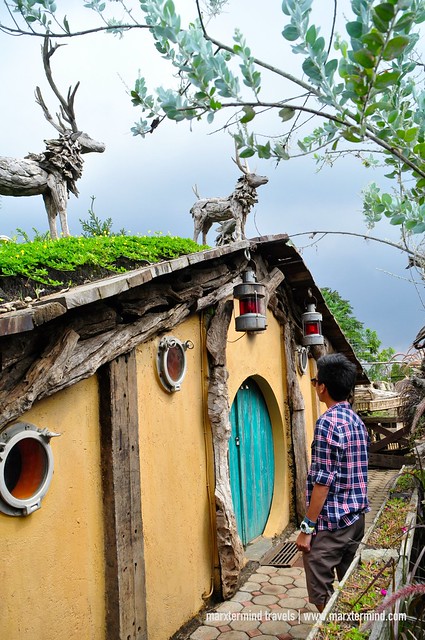 It was already night-time when we were able to get back to our hotel. We paid our driver IDR 400,000 (USD 31) for the entire trip that took almost 6 hours.

From Bandung to Ciwidey

We woke up early the next day for Kawah Putih. We made prior arrangement with our taxi driver that we’ll hire his car but unfortunately he didn’t show up. So we had decided to go to Kawah Putih by public transport, instead. We rode a taxi from our hotel going to Leuwi Panjang Bus Terminal, where vans and buses bound to Ciwidey are located. Fare to Ciwidey costs IDR 16,000 (USD 1.2). With an hour and a half travel time, it was around 7:00 AM when we reached Ciwidey. At the terminal, some locals approached us and offered their transport service to Kawah Putih. Their offer was too steep for us so we waited for the angkot (minibus) to get full. Half an hour had passed but it seemed like no other passengers were going to ride any time soon. I doubted. So I went out of the vehicle, while my travel buddies were still trying to negotiate with the locals.

With no other angkot in sight that would be passing by Kawah Putih, I went back to the vehicle. My buddies told me that they were already able to bargain the fare to IDR 300,000 (USD 22) with a side trip to a tea plantation. Still I found it a little too steep for me but we were already waiting for so long and we didn’t want to waste another hour, thus we just agreed to pay for the entire vehicle.

And when we started to travel the road, there outside the terminal I saw some vehicles loaded with passengers that might be passing by Kawah Putih. If I had only surveyed the terminal a little more I could have been able to discover that. Oh well, we were already inside the vehicle. I just convinced myself that this was a better option for us.

A Side Trip to Rancabali Tea Plantation 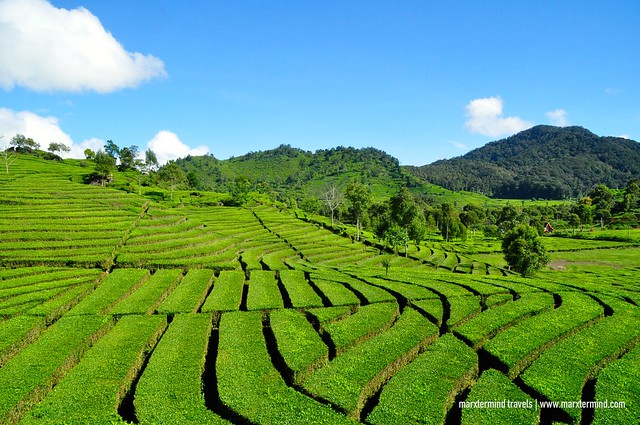 This part of West Java is surprisingly happened to be a place with rolling green landscapes of tea plantations. I was fascinated with the beautiful scenery. It has tropical rain-forest and hills in the distance. And I was in love with it. I like the highlands. I like the plantations. I like the green surroundings. 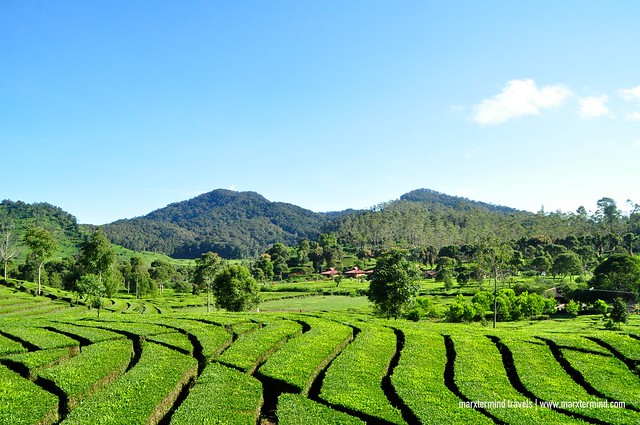 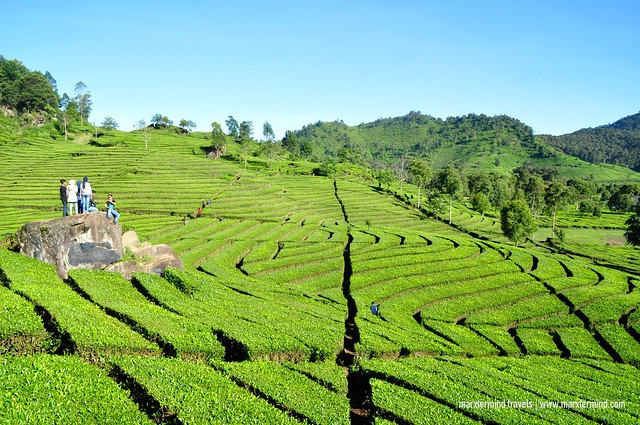 Rancabali is said to be one of the largest tea plantations in West Java. This place is a paradise for people who love nature and stunning attractions. This plantation is also just close to Kawah Putih; hence it’s a perfect inclusion in your itinerary when visiting the striking Crater Lake. 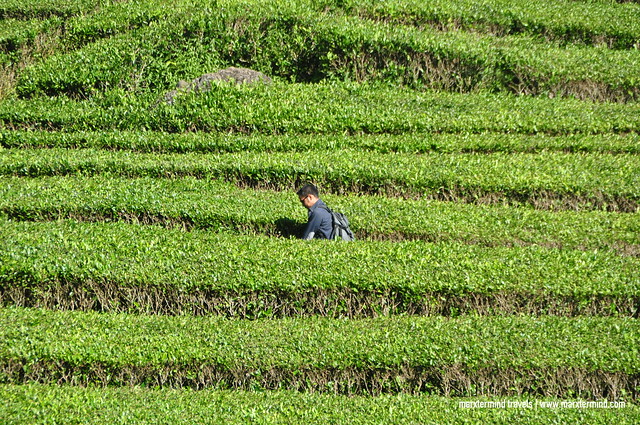 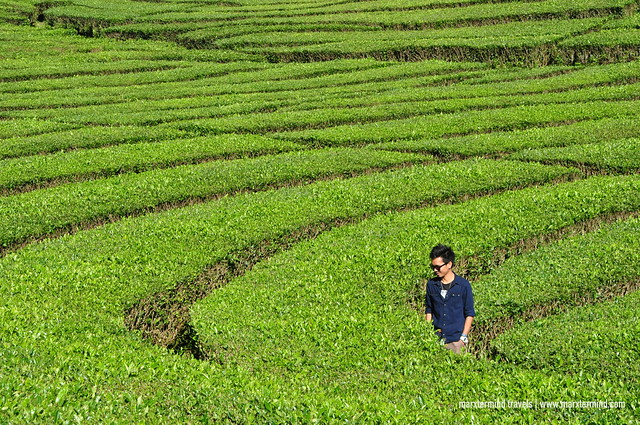 Visiting this place as a side trip was such a treat. It’s a perfect place as well for photo-shoot. In fact, we spent an hour taking some photographs on this place.

One of the places that made me excited to go to Bandung was Kawah Putih. It is a volcanic crater located south of Bandung. It is one of the two craters that make up Mount Patuha, an andesitic stratovolcano. The time that I saw images of it online, I instantly got amazed with its mysterious beauty. So before leaving Bandung, we ensure that we will be able to visit this place. So even if it says waking up very early on our last day, we did it. And I have to say the effort was certainly worth it. 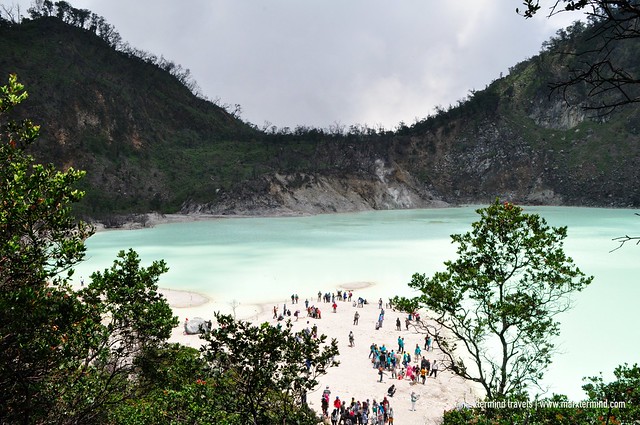 After our side trip to the tea plantation, we finally went to Kawah Putih. Our driver dropped us off at the entrance gate. There we paid for the entry fee, which is IDR 50,000 (USD 4) for foreigners and IDR 18,000 (USD 1.5) for Indonesians per person. We rode a shuttle bus from there going to the crater.

There were several tourists visiting the place, as well. Upon getting off from the shuttle bus, we already smelled the stench. I’ve learned that there’s a strong smell of sulfur because there is a good deal of steam and sulfurous gas bubbling from the lake. There was a stall selling disposable masks but we didn’t buy anymore and just used our Headware. 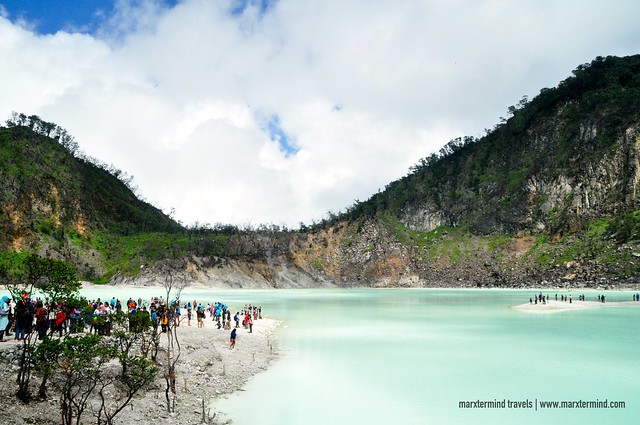 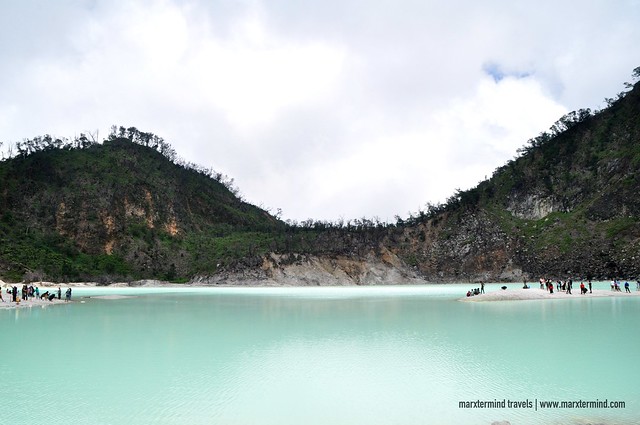 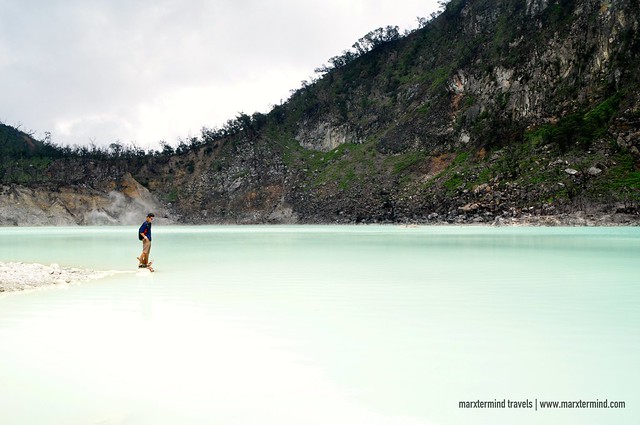 Kawah Putih was magnificent. The greenish white water looks very incredible. There was no time to lose so we went around and started capturing this strangely stunning Crater Lake. The smell however was unbearable. We had to get out quickly as soon as we were already satisfied with our photos.

It was already afternoon when we were able to go back to Bandung. We checked out from our hotel then went to a fast food in Paris van Java to have our late lunch. It was a very long day for us. It was tiring yet fun and fulfilling because we were able to see, and actually seen even more places in Bandung and West Java.