A Day in Bucas Grande: Sohoton Cove and the Stingless Jellyfish

Our trip to the province of Surigao Del Norte had so much surprise. One is knowing about the island of Siargao as a destination not only for surfing but a place with marvellous islands and beaches. Then, learning about another island in the province named as Bucas Grande that has scenic view of beautiful lagoons handed us another astonishment. What more surprising about this island is it offers a unique adventure that can’t be experience anywhere else in the country, a close encounter with stingless jellyfish. 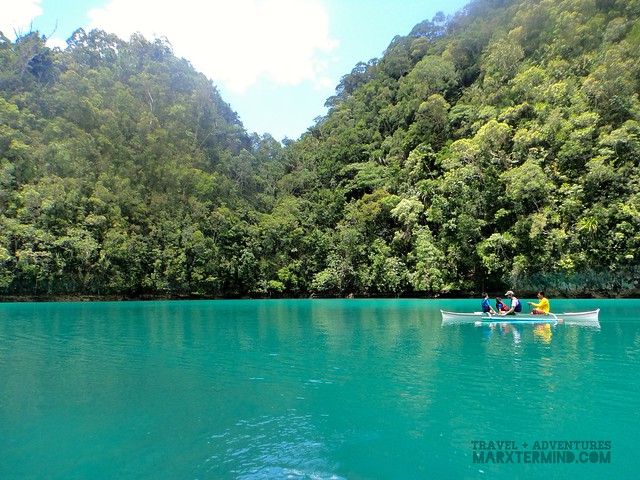 The island of Bucas Grande is situated on the far eastern part of the province of Surigao del Norte. The place is also known as the municipality of Socorro. It was our last day in the island of Siargao when my buddy and I went for a day of adventure in Bucas Grande. The island is far from where Siargao is. Sea travel may take about 3 hours. The fastest and most convenient way to reach it is coming from either Surigao City or Hayanggabon port. But despite of the longer period that we had to reach the island, it didn’t prevent us to visit it. We were firm with our desire to see the stingless jellyfish and explore the beauty of Sohoton Cove. 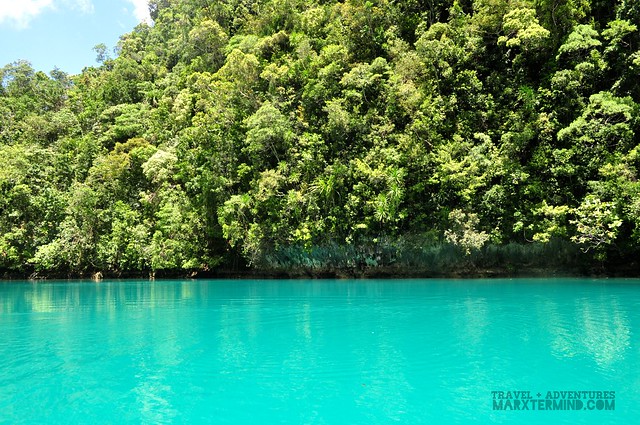 We hired the same boatman that we had the previous day to take us to Bucas Grande, Kuya Lito. Since the island was far off, the boat rental was expensive. The boat rental to get to Bucas Grande from General Luna in Siargao and back costs Php 4,000. The boat can accommodate up to 10 persons. Since we were just two, it was costly for us. An excursion to Bucas Grande might eat up an entire day. Our boatman advised us to bring cooked lunch and snacks, which we did.

It was already nearing noontime when we had reached the island of Bucas Grande. We weren’t in the main part of the island yet, but the view as we get near to it was so wonderful. The water, the vegetation and the surrounding were all astonishing to see. Our boat then docked at the Sohoton National Park Center. We had to transfer to smaller boats so we left our boat and went to the tourist center. There we registered for a tour to Sohoton and Tojoman Lagoon. 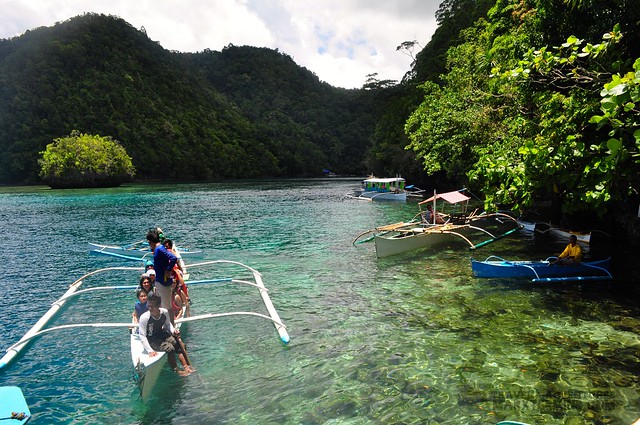 Environmental fee for the park costs Php 50 per person for local and PHP 150 per person for foreigner. Aside from this fee, one also has to pay the additional charges mandated by the tourist center such as helmet and life vest rental that costs Php 40 and boat docking fee that costs from Php 100 to Php 200. 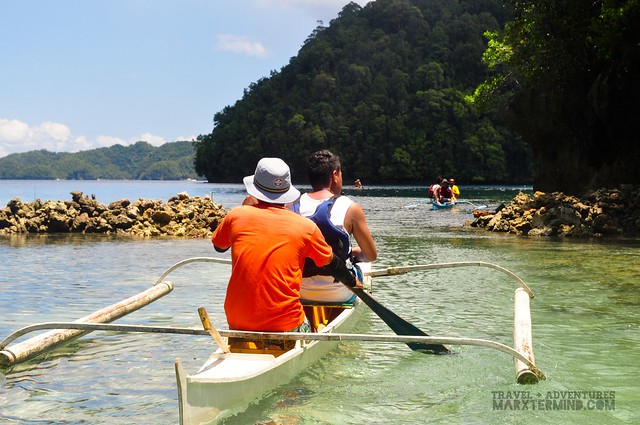 Since it was already past noontime, we started our tour by visiting the Tojoman Lagoon first. My buddy and I had separate paddle boats. The lagoon is just nearby the tourist center. 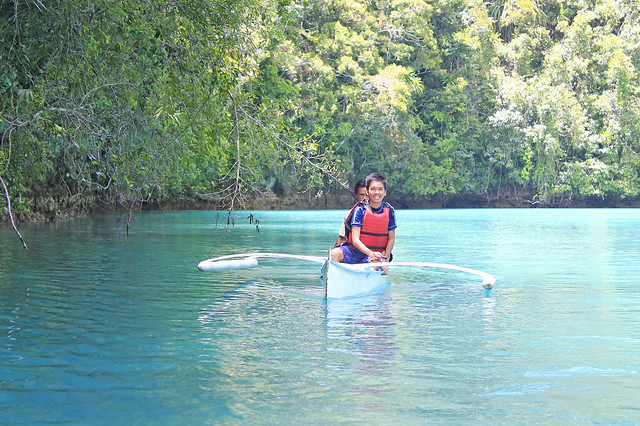 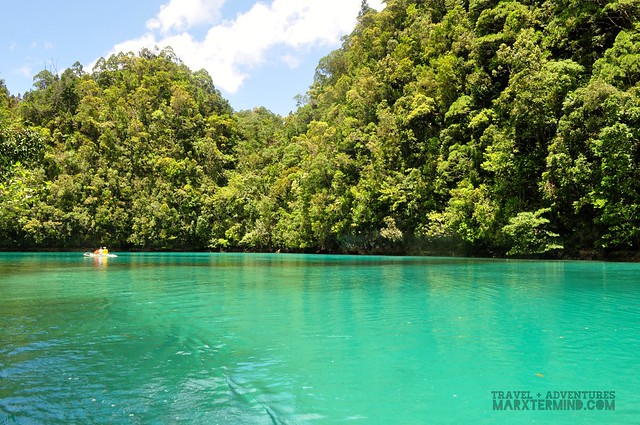 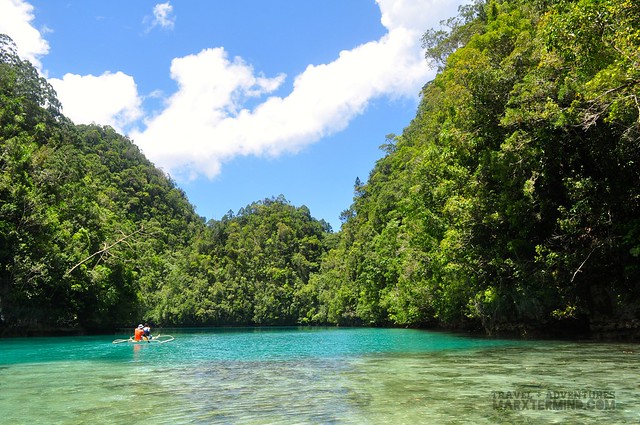 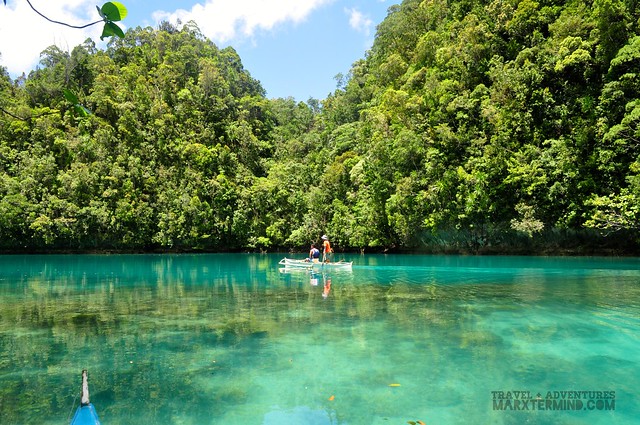 The species of jellyfish in this lagoon are the Spotted Jelly or Lagoon Jelly with Mastigias Papua as its scientific name. This kind of jellyfish has a rounded bell and four clumps of oral arms. It has conspicuous rounded structures and thick oral arms suspended below the bell. Its color is green-brown and have scattered white spots. Instead of a single mouth, it has many small mouth openings on its oral-arms. 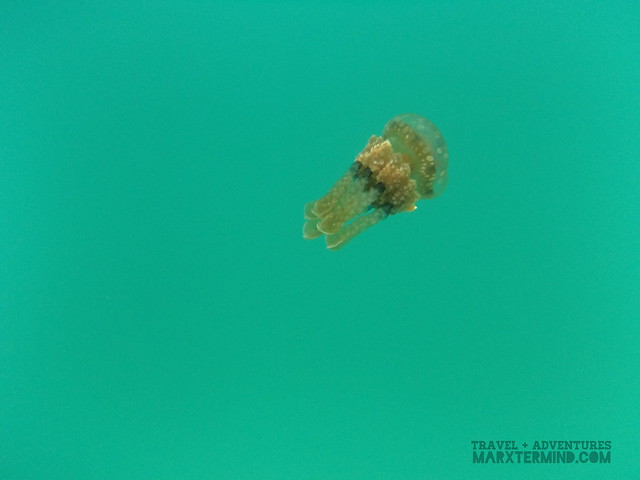 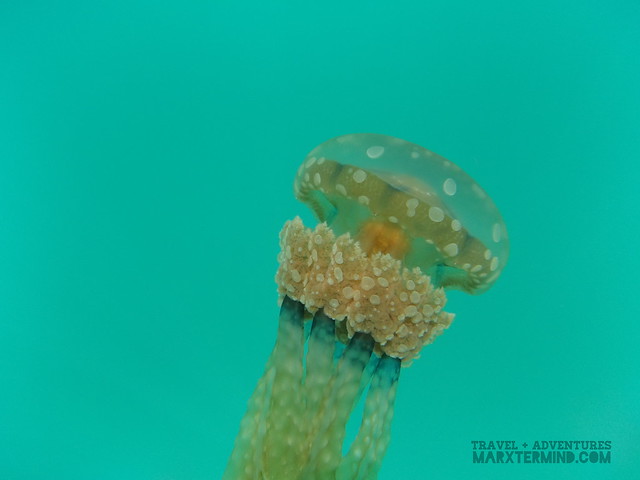 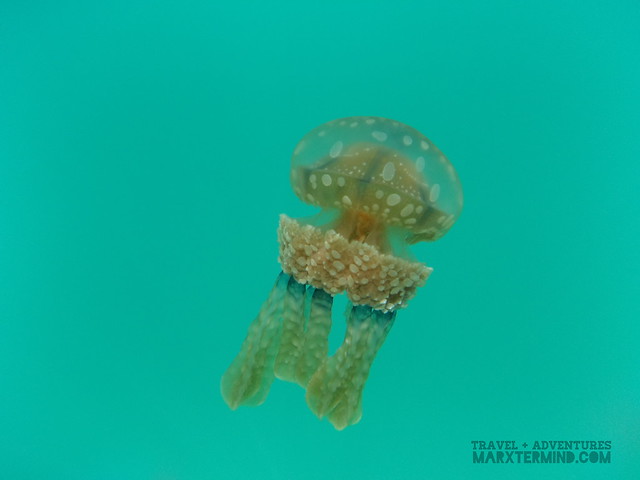 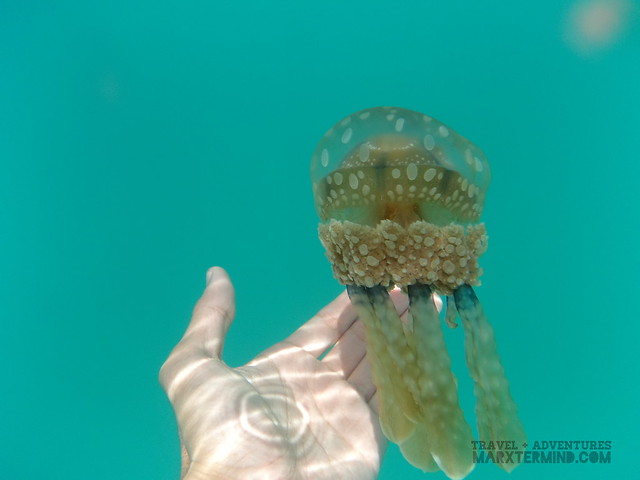 It wasn’t the mating season when we visited the island thus the jellyfish were scarce. I’ve asked my paddler if it’s okay to jump off the boat and swim with the jellyfish. I was told that they don’t allow it anymore as it affects the species. But visitors can still touch it submerged. We were advised not to lift them as they easily dry up and might die. 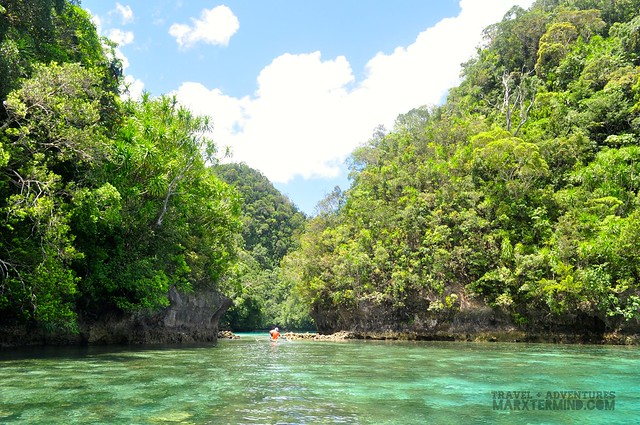 Exploring the Caves and Lagoons of Sohoton

We went back to the tourist center and transferred to motorized boat to get to the caves of Sohoton. This place is by far the most scenic in the island of Bucas Grande. It is packed with astonishing discoveries such as famous sites of Hagukan Sea-Cave and Magkuku-ob cavern. 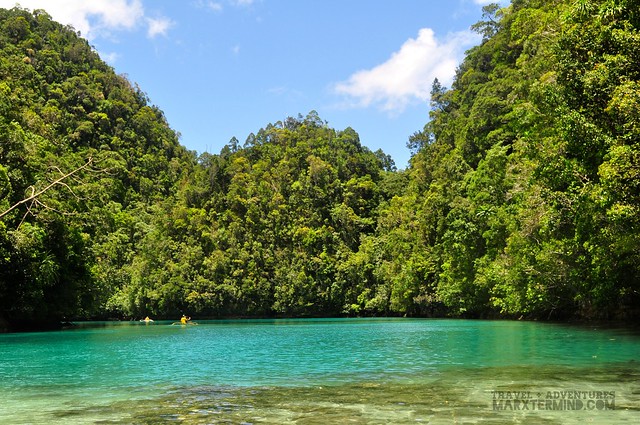 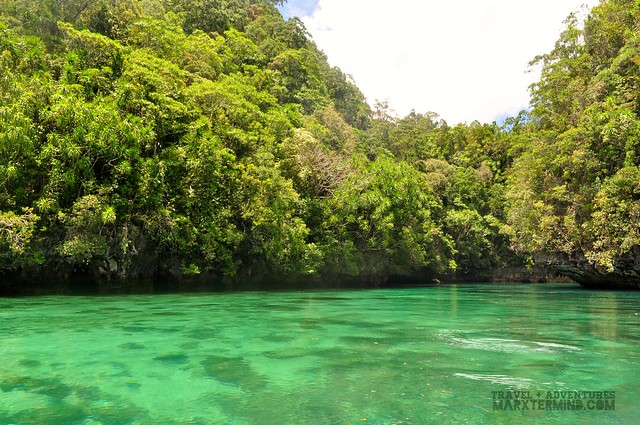 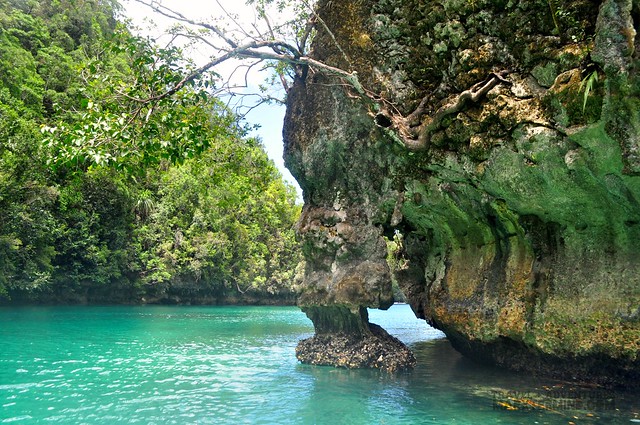 To get to these places, we entered a half submerged cave, which is the only entrance and exit point in this blue lagoon of Sohoton. 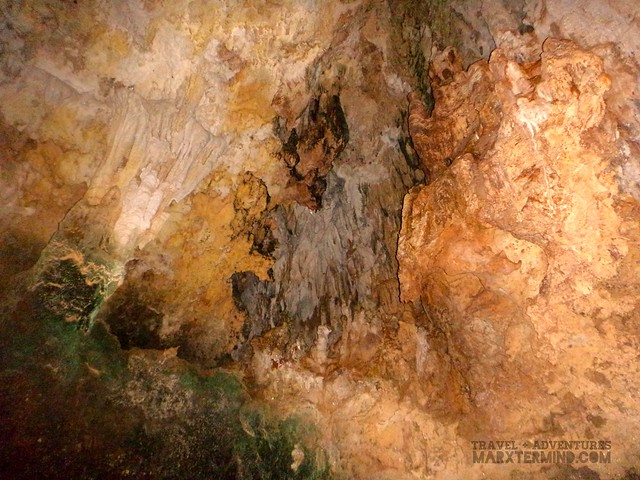 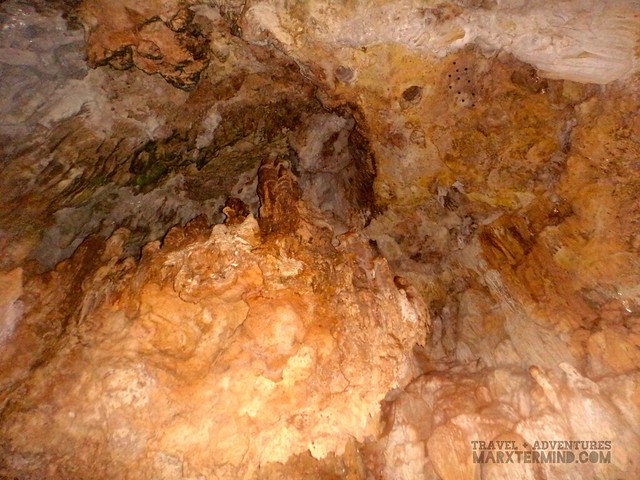 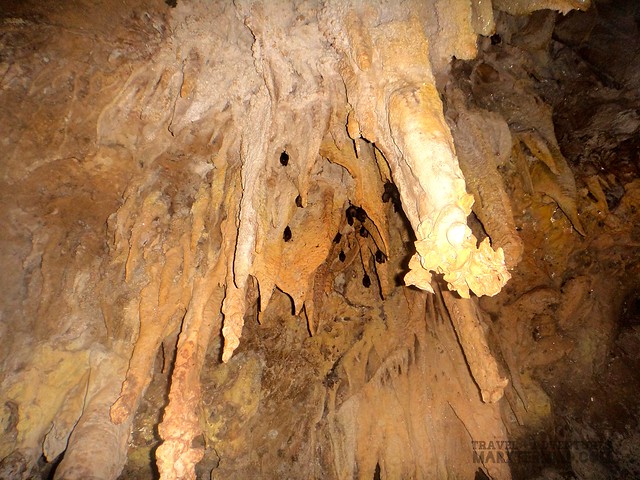 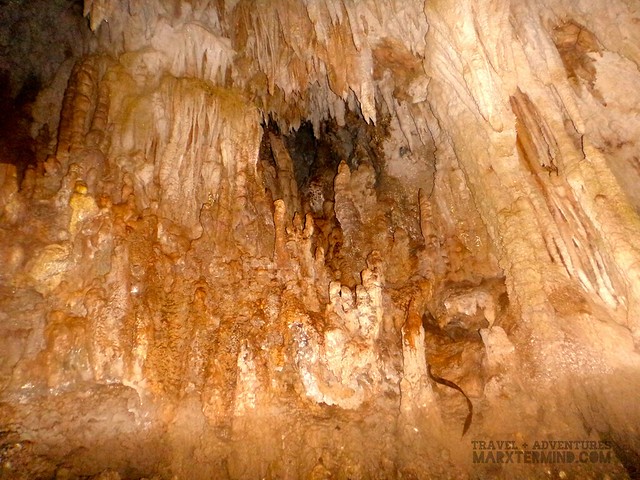 We visited Magkuku-ob Cave first. There, two guides accompanied us to get inside. The water was cold. When we reached the main cavern, we then climbed up on an enthralling passage that leads to the outside. At the exterior of the cave is where a makeshift platform is placed, wherein one has to cliff jump – the way to get back to our boat. 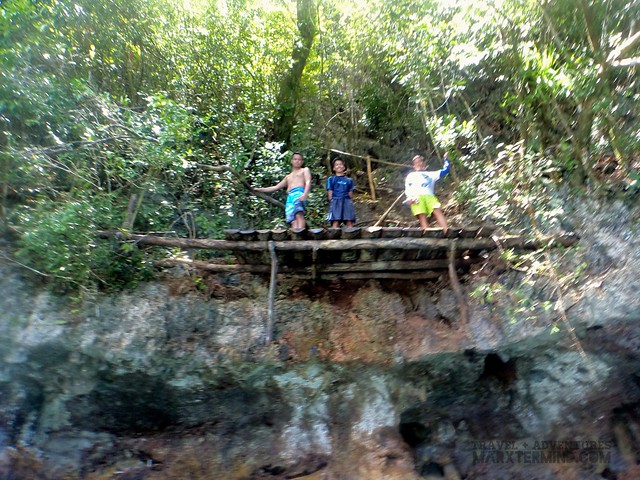 Next site that we went to was the Hagukan Cave. Getting inside of this cave wasn’t easy as the cave has a half-submerged, small access that is adorned with rock oysters. But once inside, we were amazed of the noticeable glow of our skin. The explanation for this was due to its small entrance that allows sunlight to stream directly into the water and thus makes an illuminating reflection.

We didn’t stay long inside the cave, as it was too crowded. We went out after a few minutes. I would still like to explore more of the area of Sohoton but our guides looked too hurried that they wanted to bring us back to the tourist center already. We had no choice that we left the scenic lagoon in no time that I still desiring for more adventures and explorations. 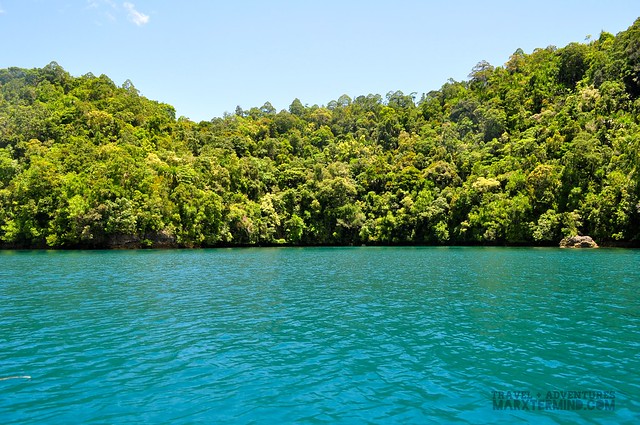 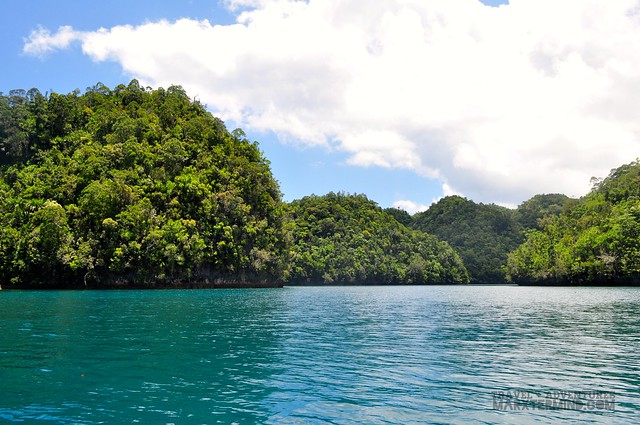 Despite of the limited places that we’ve visited, it was such a surprising experience to see the island of Bucas Grande. We were stunned how scenic the island was and how it left us with our interest to explore other things this island has. We were amazed how serene Sohoton Cove was and how remarkable to see and touch the stingless jellyfish. All of those were great wonders that can only be found in the island of Bucas Grande.