A Fun Hike Up The Rockies of Mount Maculot

Who said that hiking up The Rockies of Mount Maculot was hard? Well, it wasn’t somehow most especially if you are with a bunch of crazy and fun people. I mean we tend to forget how strenuous climbing is because we are with people that are energetic and fun to be with. Just like our climb at Mount Maculot that was filled with fun and laughter. 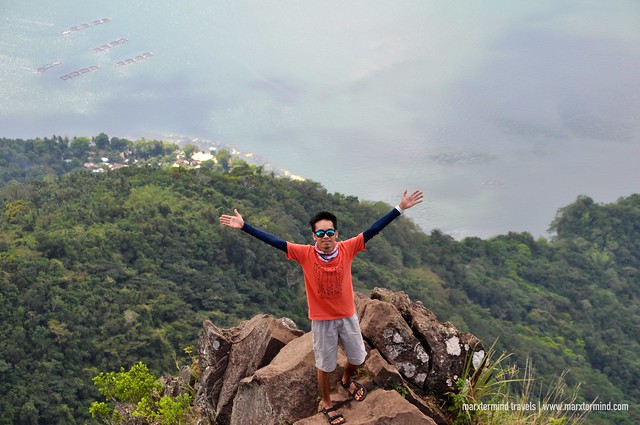 So a day before our climb, I excitedly prepared the things that I’ll be needing for our day hike. I brought my favourite daypack to carry my essential items during the trip. It is important to have a good hiking backpack to have a fun and successful hiking trip. 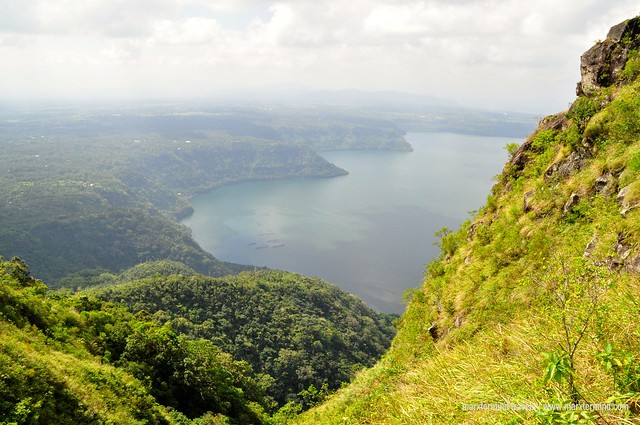 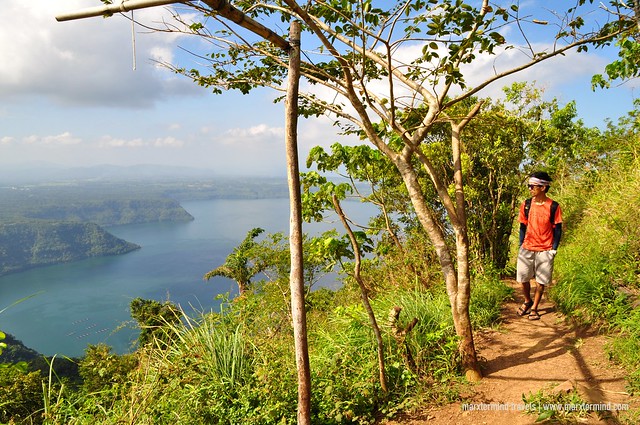 How to go to Mount Maculot in Batangas?

Located in Cuenca Batangas, Mount Maculot is a popular day trip most especially among hikers from Manila because of its proximity. A bus ride to Cuenca Batangas only takes about 2 to 3 hours.

We were a group of five. We all met up at a fast food restaurant near the terminal at Buendia Pasay at 5:00 AM. By 5:30 AM, we left and rode a DLTB bus bound to Lemery Batangas. Bus fare is PHP 150 per person. Almost three hours after, we arrived at Poblacion in Cuenca, Batangas. From the main road, we hired a tricycle going to the Registration Area. Fare was PHP 20 each. We registered and hired a guide. Registration fee was PHP 20 per person and guide fee was PHP 500 for a group of 1 to 5. An identification card is needed for registration – at least one from the group. Because of an unfortunate incident happened before, hiking is not allowed anymore without having a local guide. 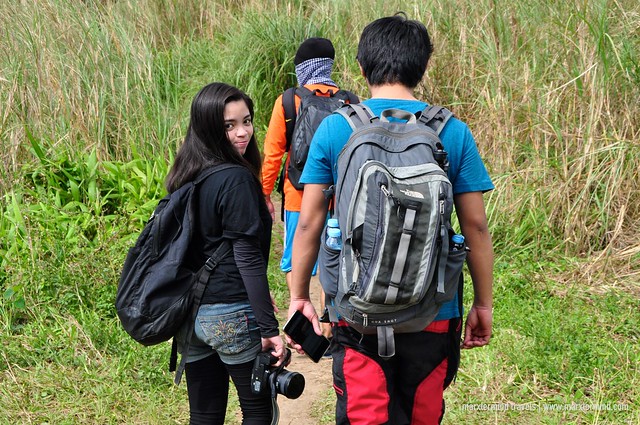 The Hike Going to The Rockies

The climb can take from an hour to three hours depending on the pace. The trail is actually clear and with ropes on some portions to support the ascent and descent of climbers. 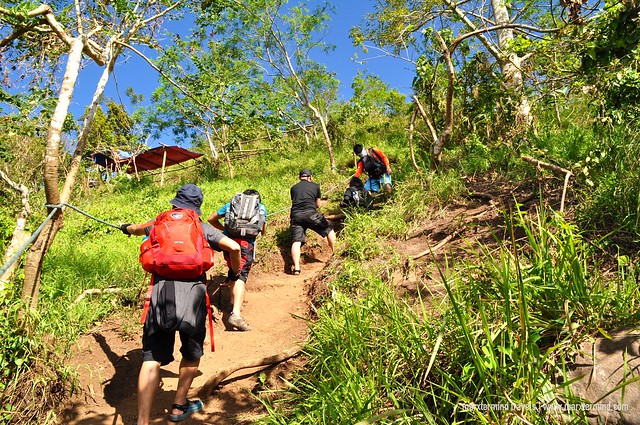 We started the trek by hiking through a concrete pavement. It was kind of challenging because the pathway was a little steep. And it had become taxing when we reached the part that is unpaved and uneven. The ascent had become steeper. But because I was with people making fun all the time, the climb somehow had become joyous. Well we are all are optimistic. We always think of the fun side. During our ascent, we always heard of cannon fire sound and we thought that we were in a Hunger Games. We thought people from other district had already been seized. But that was just a jest. In fact, we came across with another group and they thought of the same thing. 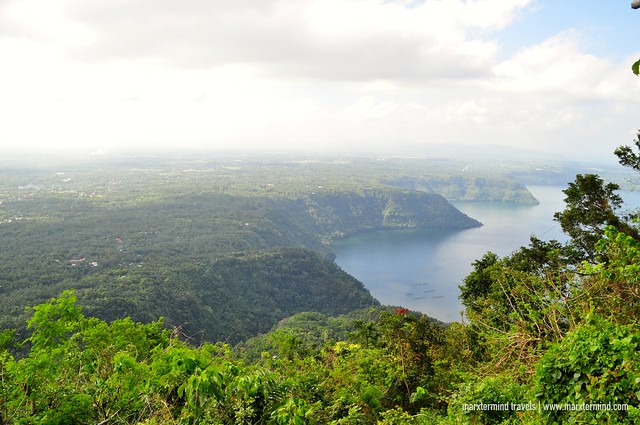 Stopovers for refreshments are also available along the trail. A makeshift store is also available at the base camp. It was around 10:00 AM when we reached the base camp and we thought, maybe we could already our lunch there. So we did. Each of us brought packed lunch or I must say rice meal from the fast food. Eh! We also ordered three packs of instant noodles from the store, which we had all shared.

Moments at The Rockies 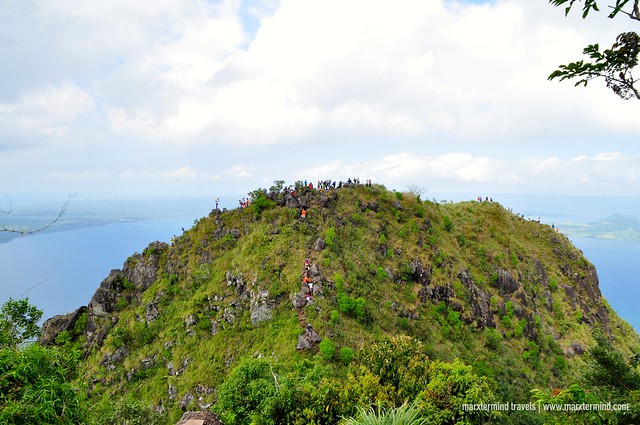 We resumed our hike as soon as we finished our lunch. We didn’t spend more time at the base camp anymore since we were planning to descent by noontime. It was less than hour when our group reached the viewpoint giving us a full view of The Rockies. Appropriate to be called as such because several rocks cover the mountain. 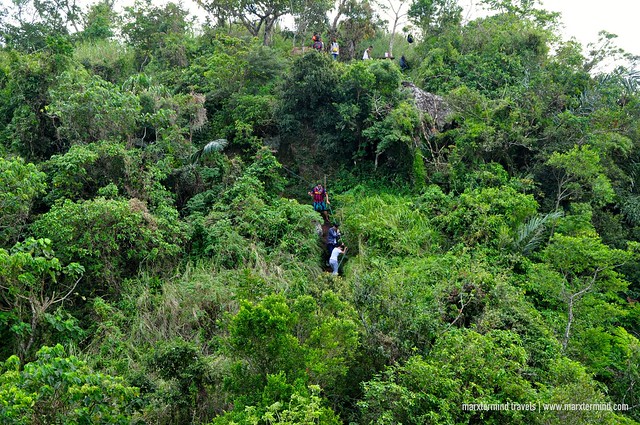 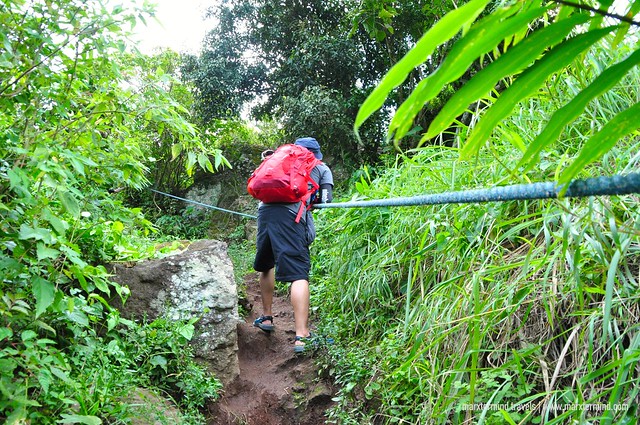 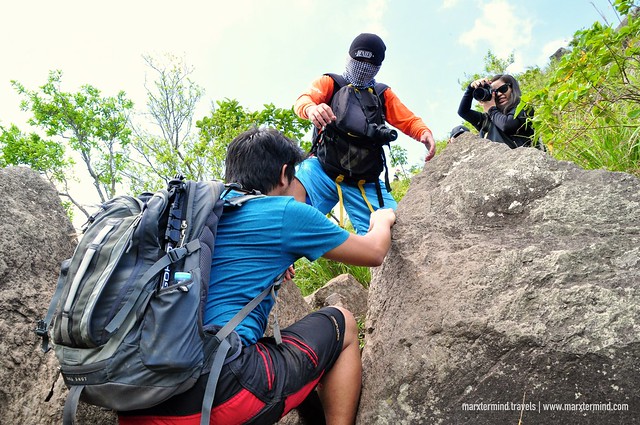 Reaching The Rockies was another challenge once again. There are slopes but don’t worry because there is a rope provided that hikers can hold on to. Our guide, JR,  helped us to get through the trail. When we reached The Rockies, our guide asked us to get to the other side of the mountain first since the other side was still packed with hikers. This side gave us a remarkable view of Taal Lake. Not minding about the scorching sun, the surrounding view gave us a great reward. It was beautiful. 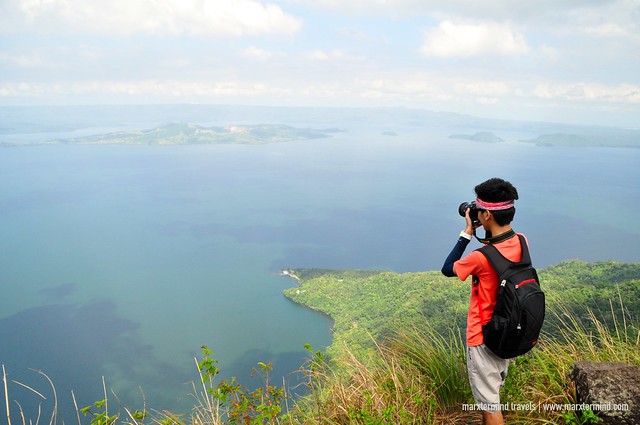 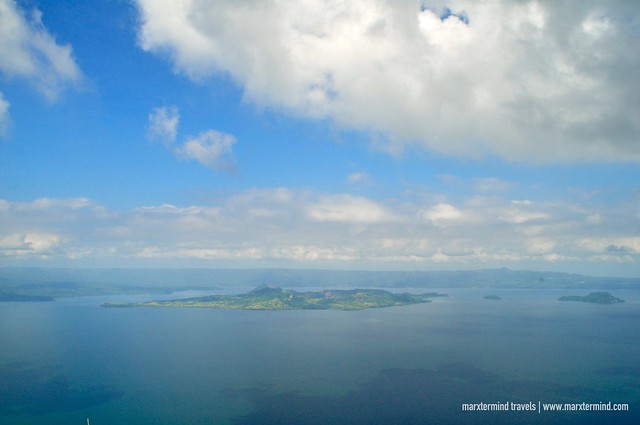 After our photo ops, we went to the other side and waited for our turn. The group ahead of us was kind of a big group so we waited longer for our turn. There was never a dull moment even we were standing under the heat of the sun. The air was filled with laughter again. As what our guide told us, “Hindi kami nauubusan ng naiisip.” (We never run out of things to say/think). 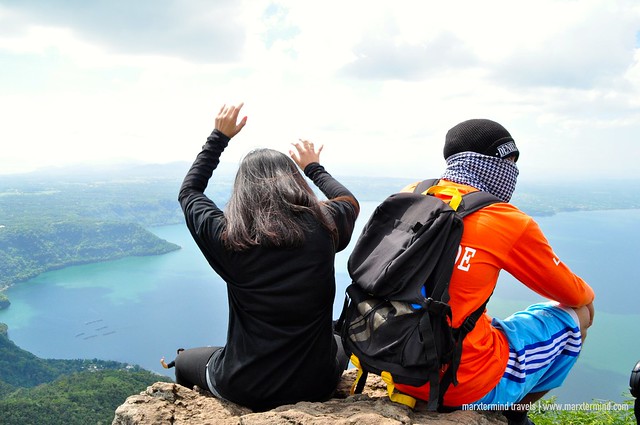 When it was our group’s turn for photo ops at the base, we did all the poses that we can have. Each had their photos showing death defying poses at the huge rock near the cliff. It was kind of scary standing at the rock so be mindful of your steps if you would be planning to have the same photos. 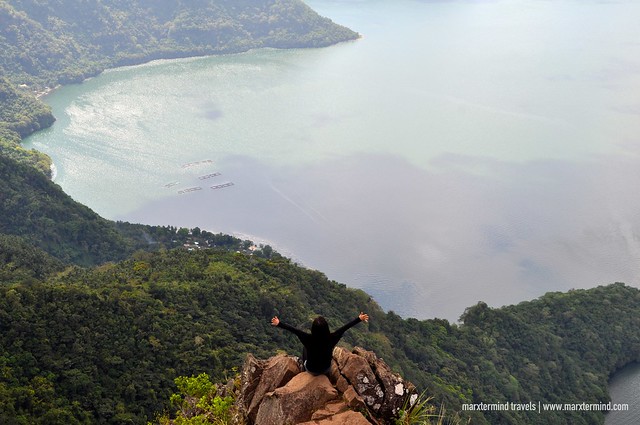 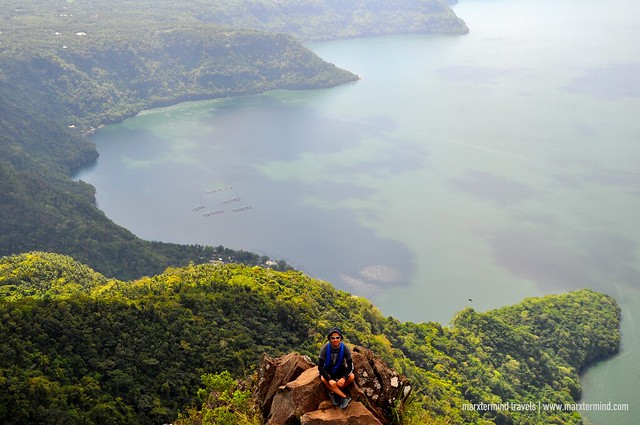 We were at The Rockies for more than an hour. The scenic surrounding was so irresistible for us not to take more photos and pictures of us showing how brave we were that we were on the top of the mountain. The difficulties of how to get here were indeed compensated with a great view. 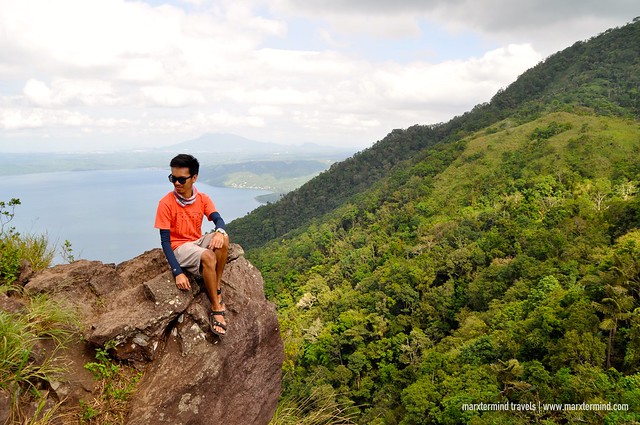 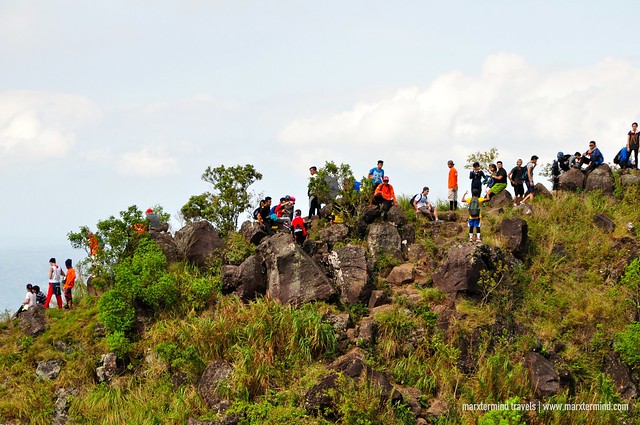 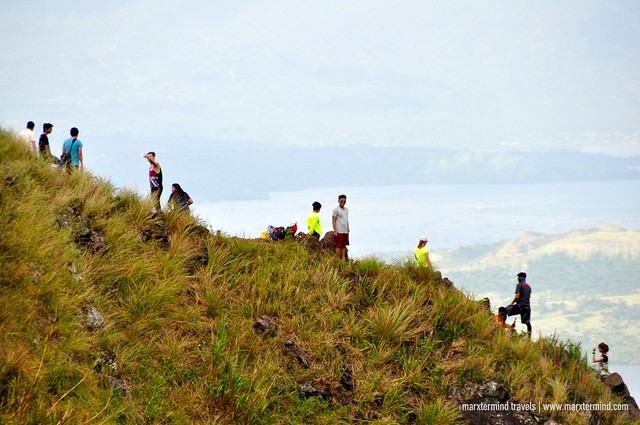 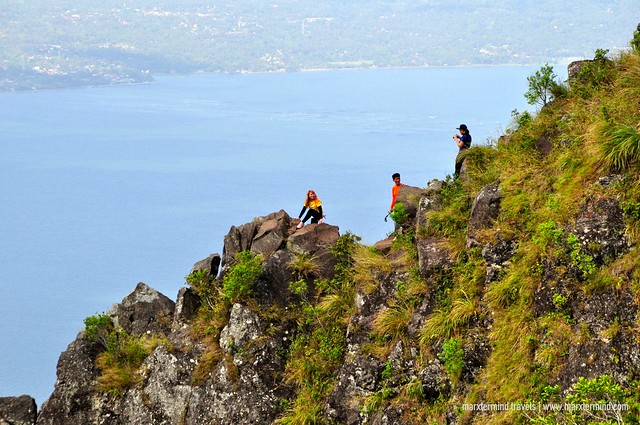 It was around 1:00 PM when we started to descend. Since we only wanted to go to The Rockies, we didn’t get to the summit and Grotto anymore. From the campsite, the descent took us two hours. We reached the jump off point tired and hungry. We settled at the resting area first and had a shower and had a meal before finally going back to Manila. 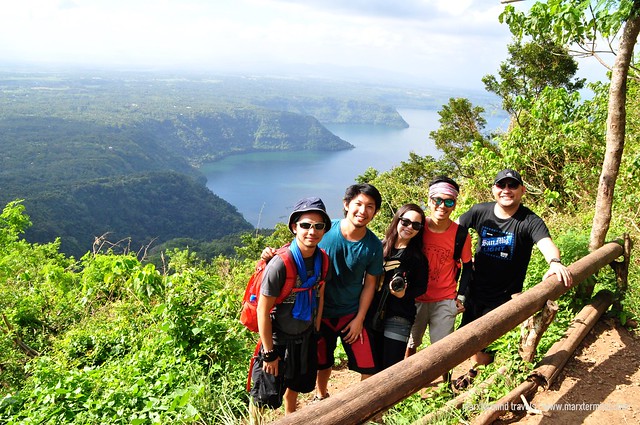 Reaching The Rockies at Mount Maculot was a thrilling and challenging experience. Getting there was a triumph. The hardship was rewarded with a scenic view and paid off by death defying photos. But what was really the most rewarding about the hike was the moment that we spent with our hike buddies. It was all the reason that made our climb less demanding. I was with people that are full of energy that made the hike felt easy. We never had a dull moment during the hiking trip because it was filled with so much happiness and laughter the entire time.