After exploring Kuala Lumpur, we went to Malacca. I learned about this place when I was searching for destinations near the city. I thought it’s a good place for a side trip because it is just two-hour bus ride.

Malacca is a popular tourist destination. Visiting this place is a great cultural experience when in Malaysia. It is a UNESCO World Heritage Site rich with heritage buildings, ancient landmarks and colonial structures. If you love history, then this a good place to see. Markings and traces of the past are still clear in some places like forts, museums, churches and towers. 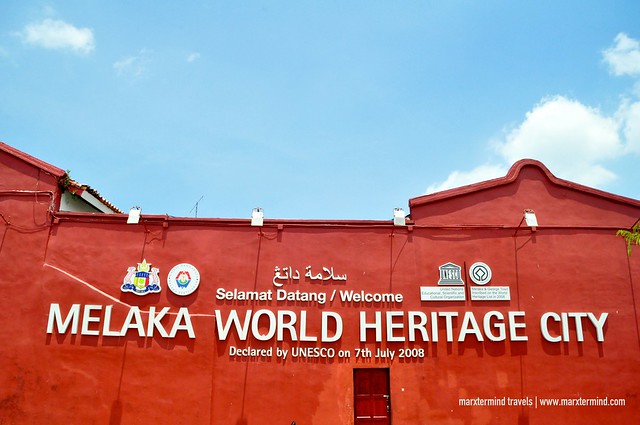 How to go to Malacca from Kuala Lumpur?

Buses bound to Malacca leave from the new bus terminal Bersepadu Selatan. It is situated next to LRT and KTM Komuter stations, Bandar Tasik Selatan.

Buses leave every half hour. Ticket normally costs from RM 10 to 12 ($2.50). There’s also an option to book tickets online but the price could be higher. But if you’re not on a tight schedule, go straight to the terminal and buy the ticket at one of the several counters, which what we did. We also bought our return bus ticket from there so we would know what time we needed to go back to the bus station after the tour. Also don’t forget to bring the passport because they might ask you to present it, just like what we had experienced.

We rode a taxi from Melaka Sentral to the town centre. Fare was RM 25 ($6). But if you would want to ride a bus that is cheaper, take bus no. 17 that goes to Malacca town.

Getting around Malacca is easy. The town centre is a small area. We enjoyed the major attractions by walking. We were supposed to be in Malacca early morning but we weren’t able to wake up on time. It was already noontime when we arrived. We were still able to see the tourist attractions that we listed despite of the lesser time that we had. We visited them one by one and surprisingly, we were able to manage to cover all in 8 hours. 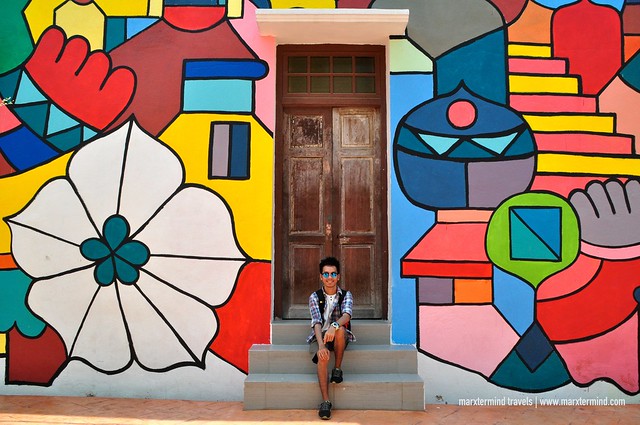 Using our maps on our phones for directions, we started the walking tour from Dutch Square and ended it by watching the Melaka River brightened at night.

This was our first stop. It is the most popular spot surrounded by red-painted buildings. It reflects the history of Malacca, where Stadthuys, Christ Church is for Dutch Administration, Queen Victoria’s Fountain is for the British colonisation, and Tan Beng Swee Clock Tower is for the Chinese settlers. 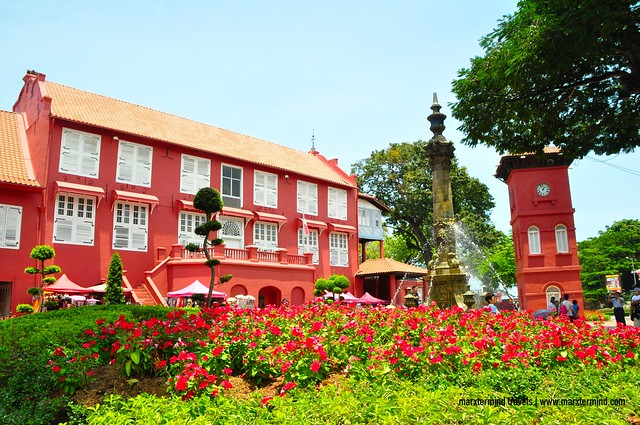 Here we also found some vibrant colourful trishaws. There wasn’t too much tourist that day, probably because it’s Monday. It is a picturesque place. We also saw some small food cart and souvenir shops.

Located off Jonker Street, we went to the oldest traditional Chinese temple in Malaysia. It is a good site to visit if you want to have a better understanding of traditional practices. 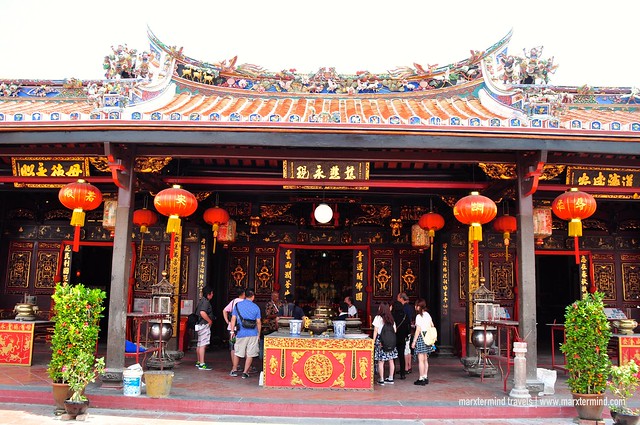 The temple has a beautiful roof and with intricately crafted little statues. The temple looks old but it was well-preserved. It is richly decorated featuring a magnificent main gate and a complex of several prayer halls.

Few walks away from the temple, we reached Jonker Walk. It is the centre street of Chinatown renowned for its antique shops. But now the street has a lot of clothing and crafts outlets as well as restaurants. During Fridays and Saturdays, the street becomes a night market. 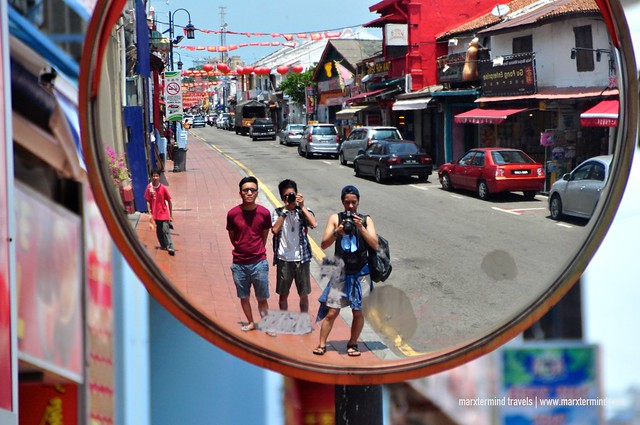 Malacca is also a place bursting with street art. We found some interesting painted walls along the laneways like the wall of the building of Heeren House where it has written Chinese characters. 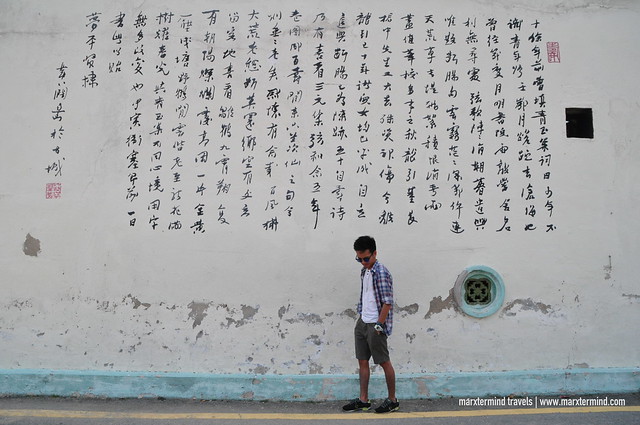 We passed by this Portuguese fortress. It is among the oldest surviving European architectural remains in Southeast Asia. The Porta de Santiago is a small gatehouse. It is the only part of the fortress, which remains today. 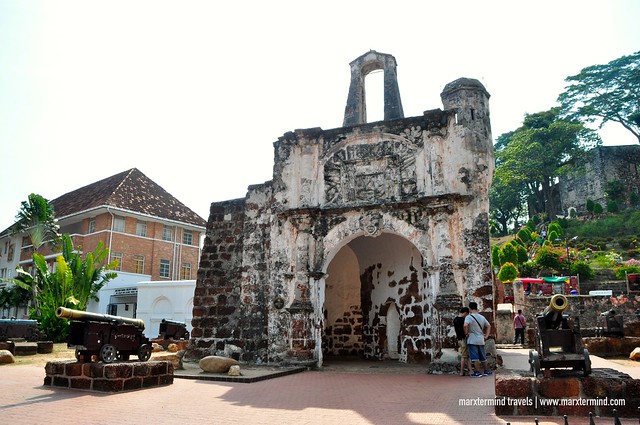 This is a revolving gyro tower measuring 110 metres in height. Its revolving structure offers a spectacular and panoramic view of the city. Admission fee is RM 23 ($6) per adult. We didn’t try this one anymore because we’re too tired already. 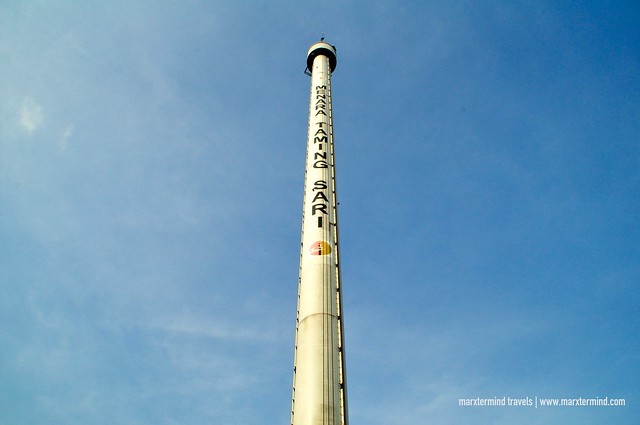 The Maritime Museum is a replica of the Portuguese ship that sank in the coast of Malacca while on its way to Portugal. The museum focuses on the maritime history of the city and the golden ages of Malacca’s Sultanate as the Emporium of the East. 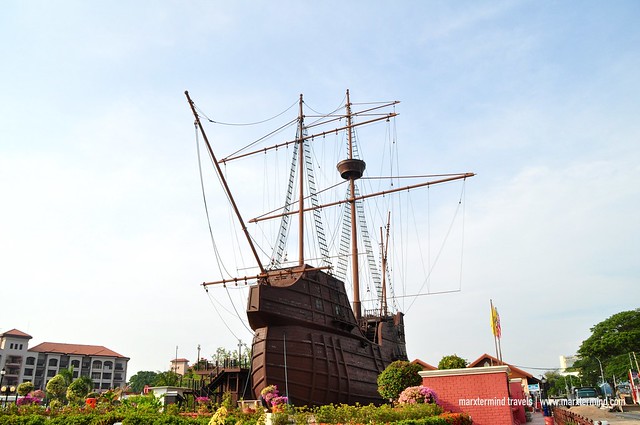 It was closed that time but inside the museum, it was said that there are paintings showing trades at the Straits of Malacca. There are also myriads of exhibits of articles such as porcelain, silk, textile and spices used by the seamen of the yesteryears. It also showcases the different eras that Malacca has gone through.

The river cruise is a remarkable experience to discover more of the town. We took the cruise near the Maritime Museum. It was about 45 minutes long. The cruise let us see the colourful villages located near the river and houses that are fine examples of Malay architecture. We saw some historic buildings and notable street arts. We also saw some interesting restaurants and cafes. It was also nice to have a glimpse of the way of living along the river. It was a pleasant experience. 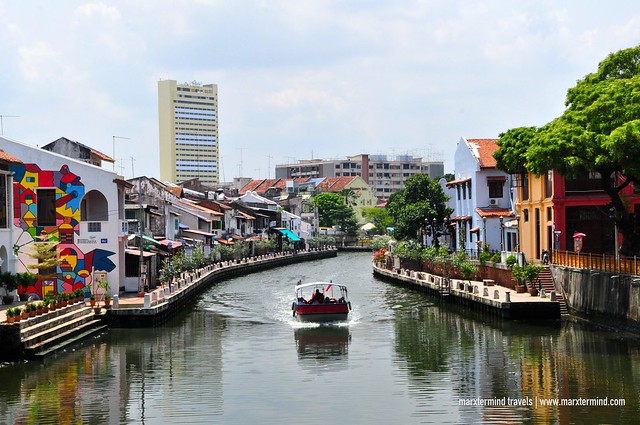 I was happy that we spent our remaining few hours by riding a cruise. Boats are available daily at every thirty-minute interval between the following times: 9.30am to 5:00pm and 6:00pm to 12:00am. Ticket for foreigner costs around RM 15 ($4)

It was nearing 6:00pm when we went back to Jonker Street and looked for a place to eat. We dined in at Famosa Chicken Rice Ball Restaurant and ordered Hainanese Chicken, roast pork and some chicken rice-balls for us to try. What we had for dinner was perfect to end our tour. 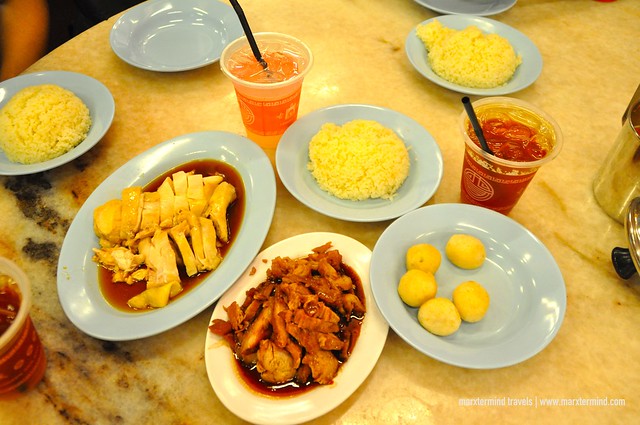 It was a long day for us. It was tiring but we had fun exploring this part of Malaysia. Our bus schedule going back to Kuala Lumpur was at 8:00 PM. It was already past 7:00pm when we finished our dinner so we just rode a taxi again going to the bus station. 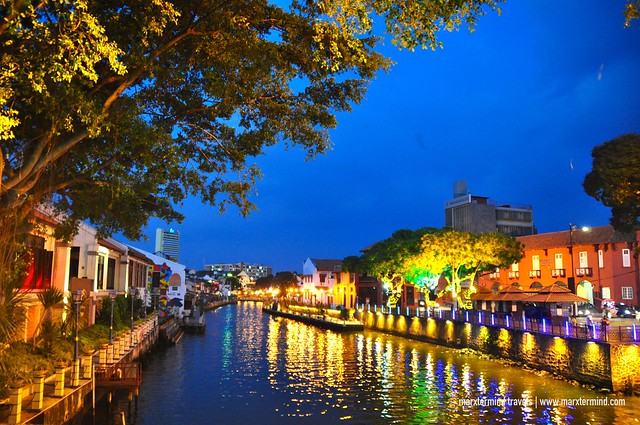 Malacca is a historic city with plenty of notable sites and rich heritage. It is easy to get around, either you choose to go on foot or hire a trishaw. Here’s our map of the places that we visited. It was a nice destination to visit for a side trip from Kuala Lumpur because of the several remarkable places that we were able to explore.